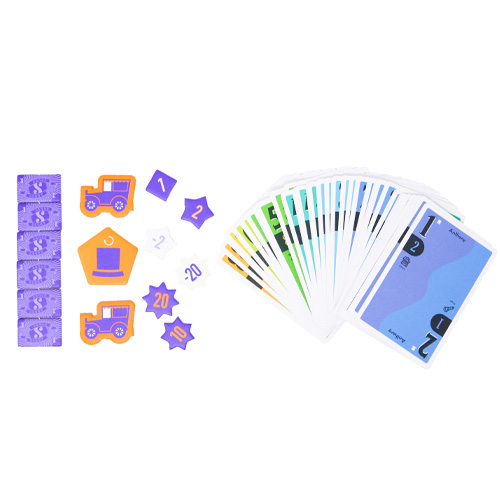 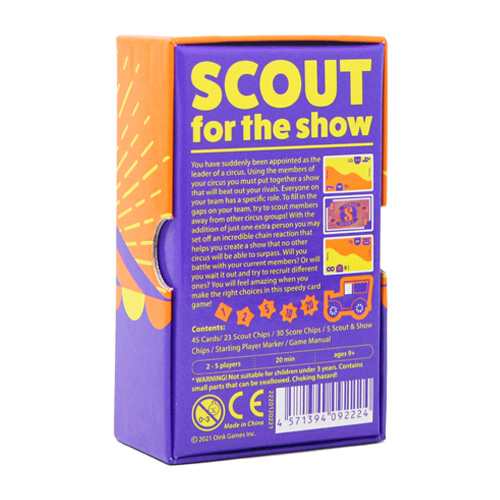 Pay in 3 interest-free payments on eligible purchases. Learn more
Success! We will let you know when this product is available again.
Your email address has been unsubscribed!
Your email address has been unsubscribed!
Notify me when this product is available to purchase!
This email address is already subscribed to this product!
You have suddenly been appointed as the leader of a circus. Using the members of your circus you must put together a show that will beat out your rivals. Everyone on your team has a specific role. To fill in the gaps on your team, try to scout members away from other circus groups! With the addition of just one extra person you may set off an incredible chain reaction that helps you…
Read More
Category Board Games Tags Oink Games, Zatu Gold Award SKU ZOINK-SCOUT Availability Out of stock
Share
Share this
86%

You have suddenly been appointed as the leader of a circus.

Using the members of your circus you must put together a show that will beat out your rivals. Everyone on your team has a specific role. To fill in the gaps on your team, try to scout members away from other circus groups!

With the addition of just one extra person you may set off an incredible chain reaction that helps you create a show that no other circus will be able to surpass.

Will you battle with your current members? Or will you wait it out and try to recruit different ones?

You will feel amazing when you make the right choices in this speedy card game!

SCOUT is a ladder-climbing game in which cards have two potential values, players may not rearrange their hand of cards, and players may pass their turn to take a card from the current high set of cards into their hand.

More specifically, cards are dual-indexed, with different values on each half of the card, with the 45 cards having all possible combinations of the numbers 1-10. During set-up, whoever is shuffling the cards should randomize both the order of the cards in the deck and their orientation. Once each player has been dealt their entire hand of cards, they pick up that hand without rearranging any of the cards; if they wish, they can rotate their entire hand of cards in order to use the values on the other end of each card, but again they cannot rearrange the order of cards in their hand.

On a turn, a player takes one of two actions:

• Play: A player chooses one or more adjacent cards in their hand that have all the same value or that have values in consecutive order (whether ascending or descending), then they play this set of cards to the table. They can do this only if the table is empty (as on the first turn) or the set they're playing is ranked higher than the set currently on the table; a set is higher if it has more cards or has cards of the same value instead of consecutive cards or has a set of the same quantity and type but with higher values. In this latter case when a player overplays another set, the player captures the cards in this previous set and places them face down in front of themselves.

• Scout: A player takes a card from either end of the set currently on the table and places it anywhere they wish in their hand in either orientation. Whoever played this previous set receives a 1 VP token as a reward for playing a set that wasn't beaten.

Once per round, a player can scout, then immediately play.

When a player has emptied their hand of cards or all but one player have scouted instead of playing, the round ends. Players receive 1 VP for each face-down card, then subtract one point for each card in their hand (except if they were the player scouted repeatedly to end the game). Play as many rounds as the number of players, then whoever has the most points wins.

Oink Games are often wonderful. Deduction games like A Fake Artist Goes to New York and Insider. Push-your-luck games like Startups and Deep Sea Adventure. Scout has recently been nominated for the coveted Spiel des Jahres 2022 award, so it must be one of the best, right?

Scout is a 2-5 player game where you have been appointed leader of a circus. Your aim is to put together a show that beats your rivals. The game is played over a number of rounds equal to the number of players. This is done to ensure everyone has a chance of being the first player. Once all rounds are over, the person with the highest points total is declared winner.

Each player is dealt a hand of cards depending on the number of players. Once you have been dealt your cards, there is one very simple rule: under no circumstances are you allowed to rearrange your hand.

I cannot tell you how hard it is to fight the urge to put them in order.

Ideally, you are looking for groups or runs of numbers. If you don't have a strong hand, you have the option of turning your hand upside down and using the other side of the cards instead. Again, being very careful not to shuffle or rearrange them. Once everyone has chosen their starting hand, the game can begin.

In turn, players can play cards from their hand that supersede that of the active set in play. This is called a show. You can only play cards that are next to each other in your hand (hence not being allowed to shuffle and rearrange your cards). To determine which set of played cards is better, you first look at the number of cards played. If this is tied, you look at the type of set. Groups of numbers (for example three 2s) always beat runs (for example 4, 5 & 6). If this is also tied, you look at the numbers on the cards. The highest value cards reign supreme. If your show beats the active set, you take the cards and place them face down in front of you. The cards you've placed now become the active set, and the show to beat.

If you can't beat the active set of cards or want to try and assemble a better "show", you have another option: to scout. Scouting means that you pick one of the outside cards up from the current active set and add it to your hand. You can add the scouted card anywhere, so is a good way of plugging gaps or adding extra pizzazz to your show. If you do this, the player with the current active set takes a scout token from the middle of the table.

Normally you can only scout or show on your turn, but there is one exception. In 3-5 player games, each player also starts with a scout and show token. This can only be played once a round. This allows you to scout a card from the active set and then immediately put on a show.

A round can end one of two ways, either a player showing all their cards, or by someone putting on such an extravagant show, the other players could only scout. You then add up your scout tokens and face down cards before subtracting the number of cards in your hand. If your show ended the round, you do not lose points for cards in your hand. After all rounds have been played, the person with the highest score is the winner.

Is Scout Something To Shout About?

Don't get me wrong, I don't generally look at the Spiel des Jahres nominees as a barometer for games I'll enjoy. There have been games nominated in the past that I've not liked or had indifferent experiences with. However, Scout lives up to the hype.

Firstly, the box art and components are just so inviting. I think it's because someone pointed out to me that the box looks like a Double Decker bar. For me, I love that the orange and purple scheme runs through the entire game.

I also love how fresh the game feels. I've played numerous card games and haven't played anything quite like it. When I explained it to one of my friends, they said "so it's like Rummy then?". I guess it is, in that you're trying to get runs and groups of numbers, but it is so much more elevated than that.

The gameplay is filled with crunchy decisions. Sometimes you can play a hand that beats the active set, but is that the best thing to do? What about scouting to make it an even better show the next time around? When's the best time to play your scout and show card? Too early feels like a waste but playing too late renders it useless.

There's an undercurrent of excitement every time I play Scout. This is normally amplified when someone plays a seemingly unbeatable hand. At this point it goes from being dog eat dog to being one versus many. You hope that everyone else can chip away at the hand enough by scouting that it becomes beatable. If not, then the round is over. It's a feeling comparable to the last few tricks of The Crew, willing people to play the right cards and make the right decisions. The obvious difference is that in The Crew, you are supposed to be working together.

Sadly, the two-player variant doesn't create that same feeling. I do wish that Scout was marketed as a 3-5 player game rather than a 2-5 player one. In the two-player game, there is no scout and show option, and you can only scout a maximum of three times. It's fine, but there are much card games exclusively for two players like The Fox in the Forest and Jaipur.

The other issue is the theme. At the time of writing, I've played Scout numerous times at different player counts, and I still had to look at the rulebook to read what the theme was. There's even names on top of the cards which serve no purpose, other than to try and make the theme feel present. I'm not mad at that though, because I imagine trying to evoke a theme in any card game isn't easy.

I can wholeheartedly recommend Scout, and would probably go as far as saying it's my favourite Oink published game. It's up there with the best card games I've played too. It'll be a game I'll take to the pub with my friends, as well as being a nice easy teach for younger family members. Scout was introduced to me at UK Games Expo this year and I enjoyed it so much, I ran into the exhibition halls and bought myself a copy instantly. If that's not a seal of approval, I don't know what is!