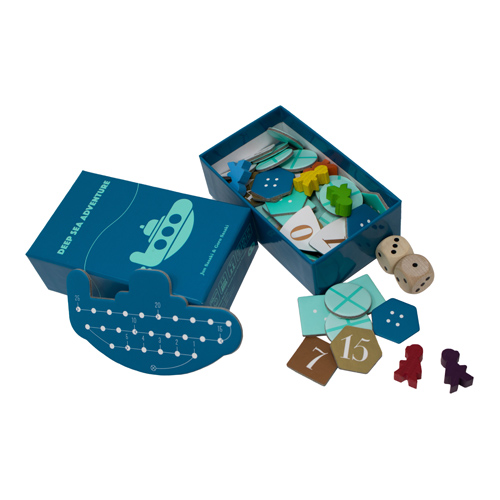 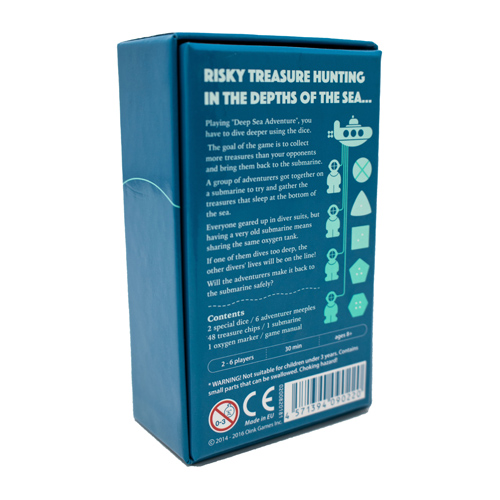 Deep Sea Adventure might best be described as a whole lot of game in a small box. It’s part of Oink Games, a Japanese company, whose insistence lies in that their games come in teeny-tiny boxes. Deep Sea Adventure comes in a cerulean-blue package, and it’s about the same size as a packet of cigarettes. It’s handbag size; you can fit it in your pocket, no problem. This is a pus…
Read More
Category Board Games Tags 9-11 Years, Best Sellers, Jun Sasaki, Oink Games, Pick Up and Play SKU ZBG-ONK0001DSA Availability 3+ in stock
Share
Share this
90%

Deep Sea Adventure might best be described as a whole lot of game in a small box. It’s part of Oink Games, a Japanese company, whose insistence lies in that their games come in teeny-tiny boxes. Deep Sea Adventure comes in a cerulean-blue package, and it’s about the same size as a packet of cigarettes. It’s handbag size; you can fit it in your pocket, no problem.

This is a push-your-luck game, where up to six players are divers on board a rickety submarine, and each are looking to claim as much sunken treasure as possible. The ‘treasure’ are triangles (0-3 points each), squares (4-7 points each), pentagons (8-11 points each) and hexagons (12-15 points each) and are placed face-down so you cannot see their exact value. The triangles are nearest the surface and the hexagons are on the ocean floor (it’s always the way, isn’t it?).

You roll two dice on your turn (each go up to three, you’ll roll between two and six) and move that many spaces down. No two divers can share the same space, so you’ll leapfrog over people, meaning you can and will move more spaces that the total you roll. You decide whether to claim the treasure you land on, and if you do, you replace it with a generic space token, so everyone still has to include this space on their descent, or ascent back up.

Importantly, as soon as you pick up a piece of treasure, the sub’s collective oxygen supply begins to diminish. It starts on 25 units, but goes down by the number of treasure pieces a diver has at the start of their turn, so it runs out fast! Also, for each trinket you possess, you have to lose a pip from the dice total you just rolled. So your climb back to the surface can be agonisingly slow if you were too greedy and picked up too much booty!

Ah yes, treasure is theoretically worthless underwater – you need to get it back up to the surface to actually score its points value. And herein lies the decisions: do you carry on diving to get another piece of treasure? You’re so close to getting a pentagon piece! Or do you cut your losses now, play safe and head back to the sub?

If you’re still underwater when the oxygen runs out, divers have to drop their treasure where it sinks to the bottom of the ocean into bundles, and they kick to the surface, gasping for air. Alive, but no treasure for their efforts.

Deep Sea Adventure lasts for three rounds. Treasure tokens are only revealed at the end of the round, so you’ll know for the next round how much of risk you’ll need to take to try and beat the current leader… But keep a close eye on that oxygen meter! Deep Sea Adventure never fails to entertain and amuse – good things come in small packages, after all.

Deep Sea Adventure is a push your luck party game that takes 30 minutes. You are wreck divers venturing from a Submarine sharing air as you roll and move out to collect treasure.

For every treasure you take you subtract one from your dice roll (two D6s and they are valued 1-3). Thus you can get stranded. You can return a treasure to a salvaged wreck (the spaces are replaced with void circular tokens) and empty/salvaged wrecks are removed between rounds - Thus, shortening the distance to the higher value wrecks.

Should you not make it back to the sub (once you have a treasure the air counter decreases equal to the treasures you have), due to no air being available on your turn, you pile in groups of three, your face down treasures starting with the further back to the Sub. The next round starts with the first player back (handy for the others and you leap frog others when moving - you can’t be on the same wreck). Rinse and repeat and the player with the higher score after three rounds wins the game!

When I first played Deep Sea Adventure a few years ago the owner said “you can win this game with one point”. This sounded intriguing and I have since passed the wisdom on to others….don’t be greedy!!

The box size from Oink Games puts Tiny Epic to shame (and the games as well in my opinion).

This is one of my main games I get out on the table for newbies. It scales to six players well, it fits in your coat pocket, you literally open the box and tip out the pieces, it is quick to set-up and takes 30 minutes or less to play.

The push your luck element is fun and many players, in the first of the three rounds, have not made it back to the sub (with treasure, due to lack of air). It’s a great learning game where you change your strategy from round to round. There will also be a gung-ho player or two, and those that are conservative, and their attitudes will change depending on their haul after round one and two.

The game could be as short as two turns per round (if players get one treasure). Deep Sea Adventure is also a game of who blinks first….to collect more treasure / who turns around first (this latter point you need to emphasise, as I too have forgotten to announce a few times before turning back).

To get the nautical theme (partially) we even took this on our first cruise last year and attracted some passersby. Plus, with the rather favourable weather (both on the ship and in Europe), we even played it on deck/outside).