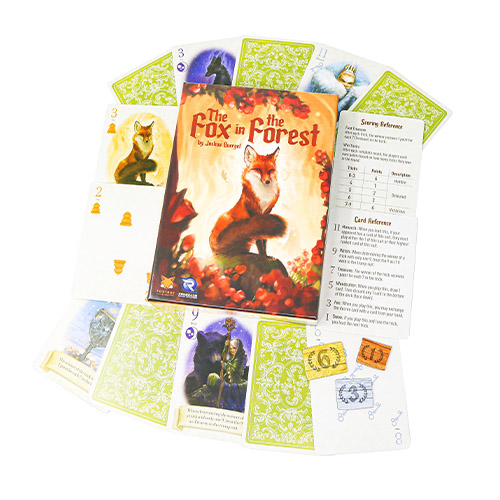 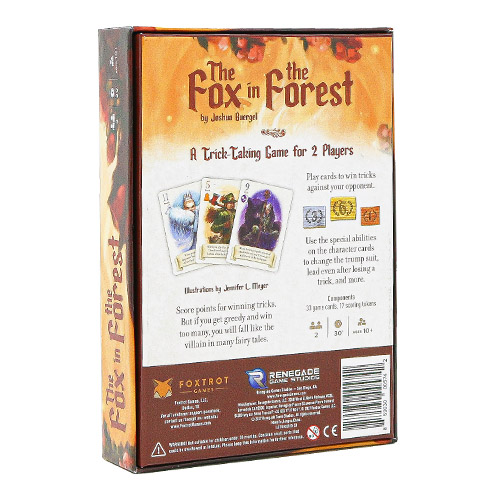 The Fox in the Forest

The Fox in the Forest is a two-player trick-taking game with a unique twist on the status quo. It combines strategy, hand management and just a little bit of guesswork. Each player tries to outsmart the other, whilst themselves attempting not to get caught out. Can you find the right balance to become victorious? The deck has 33 cards divided into 3 unique, and eye-catching suits, b…
Read More
Category Board Games Tags Best Sellers, Golden Pear, Renegade Game Studios, Zatu Silver Award SKU ZBG-RGS0574 Availability 3+ in stock
Share
Share this
75%

The Fox in the Forest is a two-player trick-taking game with a unique twist on the status quo. It combines strategy, hand management and just a little bit of guesswork. Each player tries to outsmart the other, whilst themselves attempting not to get caught out. Can you find the right balance to become victorious?
The deck has 33 cards divided into 3 unique, and eye-catching suits, bells, keys, and moons, numbered 1 to 11. The 6 odd-numbered cards all have different benefits, you can gain extra points for playing a 7, or force players into losing a good card by playing an 11. The artwork on the cards is beautiful featuring foxes, monarchs, and swans to name a few.

Each round starts with both players being dealt 13 cards and one card from the deck being upturned and declared the trump suit for that round – but be careful – playing a 3 enables you to change that suit, so keep an eye on what your opponent is up to! The object of the game is to win a certain number of tricks – winning 0-3 or 7-9 out of 13 total tricks will score you maximum points, with varying points for winning 4, 5, and 6 tricks, giving them game an interesting strategy twist. However, you mustn’t get too greedy, winning 10 or more tricks will score you no points at all, handing the other player all 6 points.

The winner is the first person to 21 points, though if you are short on time, a 16-point target works equally well.

The choice, then, is this: are you playing to win, or playing to lose? No matter which you choose – can you perfect your strategy?

The Fox in the Forest is a two-player trick-taking game from Foxtrot Games and Renegade Games Studios, with designer Joshua Buergel. Its theme is based on an original fairy tale by Alana Joli Abbott – a theme that leads to beautiful artwork of fairy tale characters and woodland creatures.

The Fox in the Forest Gameplay

The Fox in The Forest consists of 33 cards split into three suits and numbered one to 11. The aim of the game is to win tricks, meaning that both you and your opponent will play one card and you want your card to be the winning one. In the most basic play the lead player will play one card from their hand face-up, and then the following player will play a card from their hand of the same suit. The player who played the higher numbered card wins the trick and will lead the next round.

At any time there is one card face-up next to the draw deck, the suit of this card is the trump suit. If you are in a situation where you do not have the same suit as the lead player played you can play a card of another suit instead, if the suit you played was of the trump suit then you would win the trick, if it was not from the trump suit you would lose the trick. On top of all this, the odd-numbered cards all have special powers that may let you cycle your cards, change the trump suit, or even win bonus victory points.

Play will continue until both player’s hands are empty, at this point the players will look at how many tricks they have won. The player with the most tricks will win the largest share of victory points. However if you are cunning and manage to win 0-3 tricks then your greedy opponent will be punished and earn no points, while you earn the maximum of six! The game ends when the first player reaches 21 points.

Being a two-player trick-taking game each trick is incredibly fast, this is further reinforced by their only being three suits rather than the traditional four. However the frequency of special powers on the cards keeps the gameplay dynamic. There are plenty of strategies to attempt and, since you can win by losing really badly, no such thing as a bad hand.

While the even cards are laid out as you would expect a standard playing card to be (e.g the six of moons has a six on each corner and six moons in the centre), the odd cards all feature lovely art that evokes a world of magic and powerful nature spirits. It’s a shame that the theme doesn’t interact with gameplay at all.

The Fox in the Forest probably wouldn’t have impressed me anywhere near as much if not for the ability to win by losing. The biggest point swing in the game comes from attempting to win three or less of the 13 tricks in the round, and it’s not always easy. The best tactic is to always throw away the best card you can and yet still lose, then try and manipulate the trump suit to be one you have little to no cards of.

It’s pretty easy to lose the first four or five, but once your opponent realises what you are attempting to do your life gets a whole lot harder as suddenly both players are desperately trying to fail! It’s great to see the gameplay completely turned on it’s head when this happens!

The Fox in the Forest is a twist on a very traditional genre of card games. There is really no theme to the game, just beautiful art and clever mechanisms. The basics are very simple to grasp and a trick is only two-cards. If you play the highest card following suit you win, or you win if you follow the trump card instead.

However, the card ability on each odd numbered card is where this game gets interesting and can really be a brain-burner. Once you’ve been dealt your hand of cards you can begin to strategise – maybe your hand is so bad that you’re going to try and tank the whole round, or maybe you have a huge amount in a single colour and if you can make that the trump suit you’re guaranteed to win a lot of tricks.

With a bit of strategy in place, it’s then about taking your opportunities, playing your special abilities carefully, and slowly forming a picture of the cards in your opponent’s hand to see if you can manipulate that knowledge to your advantage.

The way that the game penalises you for being too greedy and winning the vast majority of tricks is also great it minimising the occurrence of a ‘bad’ hand of cards – there’s almost always something you can do to get some points each round, even just getting the points from the value seven cards. I still think you can get a bad hand of cards in the game, but it’s not often and because the game plays over a number of rounds, it shouldn’t be a big factor.

The Fox in the Forest is really compact and I think it’s a game that will travel with us a lot – we’ll just sacrifice the point tokens for a piece of paper and the game is just 33 cards. It provides quite a meaty two-player experience, making you think a lot more than you might expect.