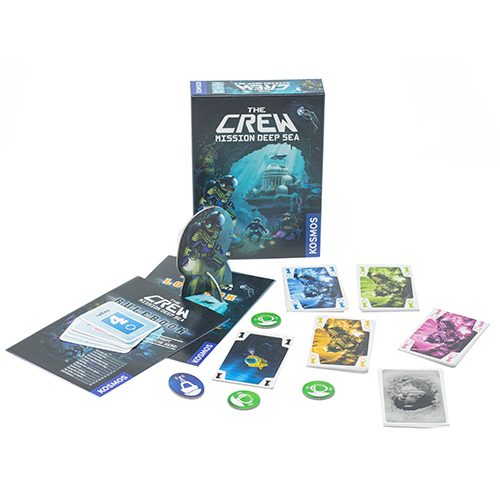 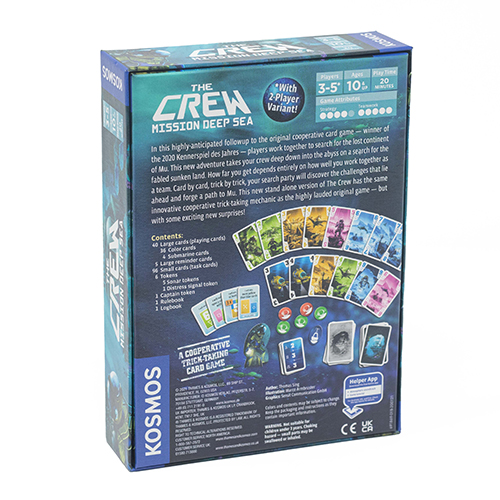 you could earn 2644 victory points

you could earn 2644 victory points

” The Crew: Mission Deep Sea The first Crew came out of no where to blow gamers away and win awards. Combining the classic genre of trick taking with a space theme and co-op twist it won over critics and gamers alike. Now it’s back for round two. Tricking taking is a fairly simple mechanic itself. Hearts or Whist are probably the most famous games to use it. The first player…
Read More
Category Board Games Tags 9-11 Years, Best Sellers, BGG Golden Geek, BGG Top 100, Dice Tower, Editor's Choice, Golden Pear, Podcast Approved, Thames & Kosmos, Value For Money, Zatu Platinum Award SKU Z-THKO-691869 Availability 3+ in stock
Share
Share this
91%

" The Crew: Mission Deep Sea The first Crew came out of no where to blow gamers away and win awards. Combining the classic genre of trick taking with a space theme and co-op twist it won over critics and gamers alike. Now it’s back for round two. Tricking taking is a fairly simple mechanic itself. Hearts or Whist are probably the most famous games to use it. The first player will play a card and the suit of this card is the lead suit and every other player must follow the lead suit if they can. The highest card played of the lead suit takes the trick (cards). Sometimes these rules are tweaked with the introduction of trump cards that always win the trick whether they are the lead car or not. The Crew turned took the idea of trick taking and turned it into a co-op game set in space. With limited communication players had to try and win tricks in certain orders, with certain players winning certain tricks or both and more! It proved to be a tense game of trying to work together, never quite knowing if the card you were about to play would make or break the round. With 50 scenarios to play through that changed the rules of communication and what tricks were needed to win. The Crew: Mission Deep Sea keeps the same tense game play but moves the setting under the oceans and adds some new kinks to its repertoire. Communication is similarly limited to the first game but you can expect more twists and turns in gameplay to keep things tense. Another thing carried over from the first game (2nd Edition) is the artwork on the suit cards forming a panoramic scene. Grab your breathing apparatus and dive in! Player count: 2-5 Time: 20 minutes Age rating: 10+"

The Crew: Mission Deep Space was an outstanding hit amongst gamers of all flavours. Cooperative trick-taking that changed dynamically from game to game. No communication and a heap of silent knowledge shared made for an experience that was superb and addictive. And where do Kosmos go to improve this fantastic formula? Well, normally folk take all great things to space… but they did that. So deep beneath the ocean it is! The Crew: Mission Deep Sea is a trick-taking game for 3-5 players, with a two-player variant, that takes about 15 minutes per game to play.

The premise for the game is that you and your crew are searching for the lost continent of Mu. It's entirely cooperative and requires consideration for everyone's efforts, potential to contribute and options. There are no rewards for being the best cooperator - it's win or lose as a team. Trick taking games come in many different flavours, but the premise is always the same. A trick refers to the cards being played in that current round, with the first player setting the suit and the highest value card winning the trick.

In The Crew: Mission Deep Sea, you'll go through a narrative that takes you on an adventure deep beneath the ocean's calm surface into perilous and dangerous territories. The logbook tracks this for players and also identifies the risk associated to the current game. As a rule of thumb, the further into the adventure you are, the trickier it will be. To begin, all players are dealt cards from the main deck until all cards are dealt. Then, players take mission cards that total the value of the mission's challenge rating. These are drawn one at a time with them all being taken if they remain under the rating. (If the rating is five, players may draw three ones, discard a three and drawn another two.)

Where the game's cooperation comes in is in the objectives set out in set up. When the set up is complete, players take turns to decide which objectives they themselves will complete. The missions are very specific in their objective for completion and failure means a round loss. This becomes even trickier when knowing that players cannot communicate during the rounds! The missions chosen are public knowledge and players can share one card with an associated fact to help others understand their circumstances, but that's it. The game is played until all cards have been played or an objective is failed, with players winning or losing on this fact alone.

I like cooperative games. Despite my very competitive attitude and outlook towards everything, cooperation is my break from the intense need to crush everyone around the table… but The Crew: Mission Deep Sea doesn't give that break in relaxation. It's easy-going, but can be tense. That lack of communication and silence breaks you and leaves you in the unknown, panicking as to whether winning this trick will end the game or guarantee victory… it's an experience provided by this game that's unlike other games I've played, and it's superb.

The Crew: Mission Deep Sea's story is your reason for playing round after round, and it's a nice story. It's not groundbreaking or best selling, but it glues the games together and gives purpose behind playing. Written as a personal log from your point of view, it gives you an idea of what this fantastical adventure entails and the troubles and excitements you encounter… but it's not a big overarching saga that's integral to play game. You could easily play the game without the logbook and still have a whale of a time. However, the journey narrated works for encouraging you to play game after game and drives your want to snap up tricks. Plus, it gives some twists and turns that add in more complications to really challenge you!

Some of the gradually increasing difficulties scale with the narration being told, particularly further into the game. This enables the game to solidly drive the story through gameplay and ensures players know the stakes. Trying to punch your submarine through a whale will definitely be trickier than a smooth descent down the Mariana Trench. But that's part of the charm! And an excellent way to embed the theme and story into the game nicely. For younger players, it'll definitely captivate them, but for those more grumpy it'll be a means to an end. Either way, it's appreciated and executed in a lovely way.

All The Colours of the Ocean!

The Crew: Mission Deep Sea looks good. That's all there really is to it. Each suit is vibrantly coloured in either yellow, blue, green or pink. The illustrations stun and astound, boasting beautifully created nautical scenes. They're vibrant and easy to identify against one another whilst also being printed on a decently sturdy card stock. Perfectly durable for slapping down in the intense trick-taking atmosphere.

Cooperative games take lots of communication and a clear line of direction. This game allows one of those, and it ain't communication! Players need to identify which objectives they'll be able to claim through tricks based on the cards they themselves have. If you've got a tonne of pinks, take any pink objectives. The green four? The objective needing that! It's that simple and yet so tricky. What we found the hardest element is knowing that the tricks weren't for winning, but for assigning appropriately. No amount of tricks claimed by one player will result in a victory… Unless that's a goal! Then go crazy!

Where The Crew: Mission Deep Sea lends a gentle supporting hand to players is with the ability to share one piece of information. Only one, but a key one that'll save the day no end! Players can share one fact about the cards they own to others by placing a card on the table and placing a token on it. At the top means it's the highest value card, the bottom means the lowest value and in the middle means the only value. It's limiting, but integral to supporting the overall mission's success. For example, if someone needs to win a yellow three in a trick, letting folk know some of your yellow values lets them plan appropriately. Remember! The game follows standard trick-taking rules and if you can play, you need to.

This little addition to the players' repertoire of choices stops this being competitive and starts being cooperative. You can only share one fact per game, so it's integral that what players share helps. We found that knowing your co-adventurers didn't help all that much as you aren't trying to outsmart them. You're trying to help them, and no amount of strained or pained looks will say "have you got any pinks?" as clearly as sharing it in a card.

The Crew: Mission Deep Sea is a superbly light, fast-paced and fun trick-taking game with a cooperative twist. It takes all the competitive elements and churns them into a game of working together by simply setting rules for each round. The game structures and drives the game from round to round using a lovey narrative that encourages you to find out what happens next, and with super simple and speedy setup, you're never waiting long. A great choice for newer players or for that laid back, fact-paced filler!