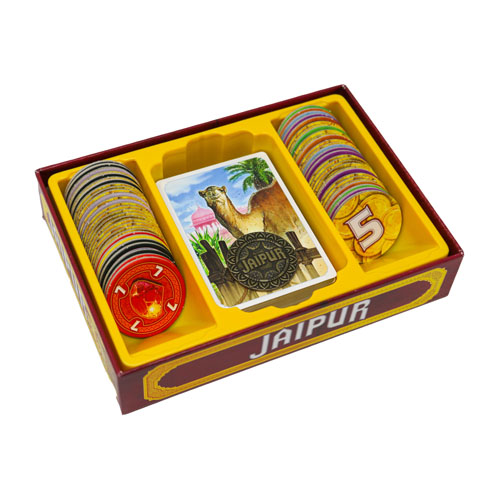 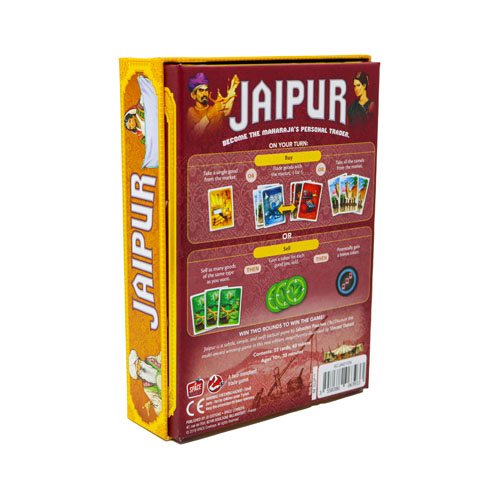 Jaipur is a clever two-player trading game where you cannot afford to ignore the camels. Each turn you will choose to either take cards or sell cards and that’s it! Of course, herein lies the rub as what you take and sell is where the risk and reward of the game lies. Cards will either represent camels or one of six goods. From a central market of five cards you will be taking eit…
Read More
Category Board Games Tags Asmodee, Best Sellers, Fun For All the Family, Podcast Approved, Travel SKU ZBG-ASMSCJAI01EN Availability 5+ in stock
Share
Share this
81%

Jaipur is a clever 2 player trading game where you cannot afford to ignore the camels. Each turn, you will choose to take cards or sell cards and that’s it! Of course, herein lies the rub; the risks and rewards of the game lie in what you take and what you sell.

Cards will either represent camels or one of six goods. From a central market of five cards, you will be taking either any one card, all the camels, or exchanging any number of cards. When you sell, you will take matching tokens for each good that you sell. Good tokens start off more valuable and decrease in value as the game goes on. But on any one turn, you may only sell one type of good, and if it’s one of the most valuable, you must sell a minimum of two cards. Also, if you sell three or more cards, you will earn a bonus scoring token.

As a result, selling is both a marathon and a sprint. Getting one or two high scoring tokens is great, but is it better to wait and sell a job lot? Camels can never be sold, but don’t count towards your hand limit and can be used freely in exchanges. Exchanges are really useful because you control what goes back into the market for your opponent to choose from. ON the other hand, when you draw one card or take camels, the market is refilled from the deck, which could hand your opponent first dibs on the best cards.

So, although you don’t always want your opponent to be 'cameled up', it can be a good way to tempt them into refreshing the market for you. Of course, the person with the most camels at the end of the game also gains five extra points, which can prove crucial.

Jaipur 2nd Edition is a tight, fast, and clever game with lots of great decision-making. You will find yourself battling the same person over and over to settle once and for all who really is worth the most camels!

Jaipur is a fabulous set-collection and hand-management game, which is much vaunted in many ‘Best for 2 players’ line ups- and with good reason. It's quick to learn and play, has some good tactical depth and is beautifully designed and produced. Jaipur 2nd Edition features gorgeous new artwork with the same satisfying gameplay of the first.

Selling involves discarding a set of cards of the same good type from your hand. You take an equal number of tokens from the top of the relevant goods' token stack – all bar one of these stacks of 5 – 9 tokens are ordered in decreasing value. The goods themselves also cover a range of values – gems are most valuable, while hides are least valuable. The three precious goods also carry the restriction that you must sell them at least two at a time. If you sell 3, 4 or 5 of the same kind in a transaction, you draw the appropriate bonus token and these have a hidden value, which also sits within a range. The game ends when 3 of the 6 stacks of goods tokens are depleted, or the draw pile is depleted. Players score the total of all their goods and bonus tokens. There is a final 5-point bonus for the player with the most camels in their herd. In Jaipur 2nd Edition, just as in the original, the best of 3 wins overall.

Brisk, thinky and satisfying. There are a number of tactical considerations to weigh up. Do I get an early sale for a smaller set of goods or hold on for a bigger set? Do I take that growing number of camels rather than a solitary goods card, but in so doing refresh the market for my opponent? Or do I go for high value goods which might be more contested, or scoop up the lower value goods, where I might be able to gather the full 5 quite quickly? How do I manage with a paltry 7 cards in my hand – how many different sets am I really trying to collect? These make for an interesting puzzle but one that doesn’t lead to too much analysis paralysis and so play cracks along at a lively and enjoyable pace.

This simple but satisfying blend makes Jaipur 2nd Edition a highly accessible choice – I have played it with a wide range of family and friends. It comes in a compact format with a highly attractive design and great production values. It comes out at home, at the pub and on holiday – a game for all seasons. I strongly recommend adding it to your collection.

You are a great merchant in the great city of Jaipur. The Maharaja will invite only the richest merchant to be selected as the best trader in all the land. You must compete with your rival to be the first to achieve two seals of excellence. Buy, exchange, and sell goods at the best price on the market while all the while keeping an eye on your camel herd. Make the most money to gain a seal of excellence.

Jaipur is a two-player set collection and card game designed by Sebastien Pauchon. Players trade goods cards to create sets, then sell those sets to make money. There is an element of push your luck and trying to guess what your opponent might do next that keeps you on your toes. Jaipur is fast-paced and has a nice balance of luck and skill that makes it a good choice for passing time and for couples.

During a round, on your turn, you take new cards into your hand from the market or trade them in for goods you want to discard. You can also sell goods to make money. Selling higher value goods makes more money, as does selling sets of three or more. You can also collect camels. Camels have no value but can be used to trade for goods you want from the market. The player with the most camels at the end of a round gets five bonus rupees.

Whoever had the most rupees at the end of the round wins. Best of three rounds wins the game.

You are ready to play!

How to Play Jaipur

On your turn, you may take one of two actions; Take cards, or Sell cards.

If you choose to take cards you can do one of the following:

Choose a type of card you are going to sell. Discard as many of those cards as you want from your hand to the discard pile. Take as many tokens as cards you sold from the corresponding stack. If you sold three or more goods, take a corresponding face-down bonus token from the bonus stack. NOTE: You are restricted to selling a minimum of two rubies, gold or silver at a time.

The round ends when either three goods token stacks are depleted. Or if there are no cards left in the draw pile while trying to fill the market.

Push your luck – The bonus points for selling more goods can be huge. 10 bonus points can be a massive swing so don't write off. Simply collecting five low value but common cloth to get a big bonus. It's my favourite strategy.

Snipe the high-value goods – It's not my strategy of choice but in a recent tournament I played, lots of my opponents sold the first good of everything they could get. The first token in the stack is often more valuable than the rest. Selling the first one or two can win you the highest value goods and slow down your opponent, but you miss out on the bonuses.

Camel Up! – The player with the most camels gets five points, plus camels are useful. Camels give you the option for big plays, you can switch in new goods without it costing you any goods from your hand. You can do a big sale, then on your next turn brings in a whole new set of cards ready for another sale. If your opponent doesn't take them on their turn, then rinse and repeat.

If you have lots of camels and your opponent has none, you are in control of the game. More often than not, the person who wins the camel token wins the round.

Cut your losses – If you are holding out for a bonus but your opponent also starts taking an interest in the same good as you, consider selling early, especially if high value, rare cards are as stake. It's a risk worth considering, and games can be won and lost on it.

Kill the round early – If you suspect you are in the lead, consider forcing the end of the round by depleting three stacks or emptying the market deck. Don't get greedy. Don't give your opponent time to take the lead back.

Poker Face - No matter how much your opponent's last turn messed you up, don't let it show!

I hope you enjoy playing Jaipur. I do! Learn more about the game by reading our review. Also, the second edition has just arrived and is available now!