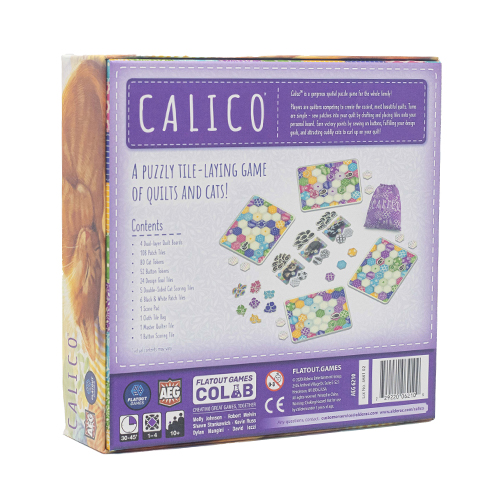 Calico Calico might draw you in with it’s promise of cats and easy gameplay but it’s a devious trick! This is a brilliant mind melting game of optimal placement. Oh and cats. Calico is primarily a tile drafting and laying game. Each round you will play one tile from your hand to your player board before choosing a replacement from a selection of three. The components themselves …
Read More
Category Board Games Tags Abstract, Alderac Entertainment Grouo, Strategy, Zatu Gold Award SKU ZBG-AEG6210 Availability 3+ in stock
Share
Share this
86%

Calico might draw you in with it’s promise of cats and easy gameplay but it’s a devious trick! This is a brilliant mind melting game of optimal placement. Oh and cats.

Calico is primarily a tile drafting and laying game. Each round you will play one tile from your hand to your player board before choosing a replacement from a selection of three. The components themselves are nice thick and chunky tiles, and player boards are dual layered keeping everything in place.

Speaking of the player boards, this is where the action unfolds as you construct your patchwork duvet for the cats to moult on! Before the game starts you will choose or randomly draw three scoring tiles. These will reward you for specific combinations of tiles adjacent to them at the end of the game.

Each tile has a colour and a pattern and the scoring tiles have a request like AAA-BBB this means that the six tiles are either of two colours or two patterns to score, however if you manage to have both two colours and two patterns around the tile you will score more points! This is where the brain burn comes in as you try to maximise your points.

On top of this are cats and buttons! Buttons are added to the board at the point you join three of more tiles of the same colour. Cats have their own specific likes which are listed on their cards. Achieve it and that cat will slump on to your duvet and sleep.

Calico is one of those rare games that is easy to teach and understand but then gives you a lot to think about on your turn. While younger players will be able to play it, understanding the scoring and making best placement can be tricky! However the fun and tactile nature of the game make it a definite winner on game night!

Cats and Quilts; a purrrfect match!

If there was ever a time where we needed the cosy comfort of a warm, enveloping quilt and the calming company of a contented kitty cat, it is now. However, the dream team that is renowned illustrator Beth Sobel (you may have heard of a little game called Wingspan) and designer Kevin Russ have very different ideas in Calico. Please don’t let the cutesy cover fool you. Calico is a complex, puzzly, abstract tile-placement game and, from the look of the sleeping tabby on the box, one which under promises and massively over-delivers!

A game for 1 – 4 players, Calico is very simple to set up. In a normal multiplayer game, each player receives a unique colour coded player board (quilt) and a corresponding set of six goal tiles, four of which are chosen at random. Out of those four, three are then placed on the marked spaces and form a player’s personal objectives for the game.

Three cat cards are also selected from the available pool of ten (showing different levels of difficulty) and two black and white pattern tiles are assigned to each of those chosen kitties. These are the cat's players will try to entice onto their personal quilts as they are sewn together during the game.

The small button and corresponding cat tokens are placed within easy reach and each player takes two coloured patch tiles from the communal bag into their hand. Finally, three more patch tiles are removed from the bag and placed in the central area between the boards to make up the draw pile. And that’s it; it’s sewing time!

Players work on building their beautiful quilts in ways which achieve victory points. For example, if by placing a tile, a player is able to connect at least three patches of the same colour, they can sew a colour co-ordinated button onto any one of those matching patches and that is worth 3 points at the end of the game. Indeed, get a button of each of the six available colours and the rainbow bonus token is yours!

Similarly, if patch placement has secured a pattern sequence printed on any of the cat cards, a little cat token can cosy up onto one of the relevant tiles on that player’s quilt and will score the relevant number of victory points shown on the corresponding card (and underneath the token itself). Play it just right and it is even possible to pull off killer-combo moves gaining cats, buttons, and goals in a single turn; enough point booty to make even the greatest Street Fighter fan weep into their bandaged hands!

Haberdashery Health Warning; once a group or sequence has scored, those patches cannot form another group of identical tiles for scoring purposes……so choose wisely my little sew and sews!

Now, the needle sharp-eyed amongst you will have spotted two things. Firstly, that around the edge of the quilt boards are pre-printed partial/whole patches. These are sew helpful as they can form part of any pattern or colour sequence you are trying to achieve. Secondly, whilst you might have a quilt bursting with buttons and/or covered in cats, there are some meaty victory points up for grabs if one or more of your three objectives can be achieved during the game.

Moreover, if you can place tiles in a way that satisfies both pattern and colour around a particular goal, you’ll be squaring up to stitch up your opponents when it comes to final scoring as the hefty yellow point values become yours for the taking!

Whilst it doesn’t dictate play, I have to give a special mention to the quality and attention to detail that has gone into the components; they are quilt simply wonderful. From the double-layered, chunky player boards which help to lock in tiles during a game, to the thick printed bag, and extra stitching annotations on the patches, the team behind Calico have not left one button hanging by a thread. And that is before we even start admiring the illustrations depicting Coconut, Millie, Leo, and the gang of feline friends (not directly, mind you – have you ever tried to win a staring competition with a cat?!).

Continuing in the same vein, this high level of care carries through into the fully formed solo campaign and the easy to read rule book which also contains the personal histories of the purrrfect pussycats inspiring the game’s creator. It is also encouraging to see a proactive decision by the designer to make this colour-centric game accessible to those players with colour vision deficiency; each patch having a specific symbol correlating to its matching colour button shape so that everybody can play the game to its full potential without being disadvantaged. The use of black and white pattern tiles for the cat cards is also a particularly neat thematic touch given the limited spectrum of colours cats are known to recognise.

Full disclosure time; I am a huge fan of this spatial, creative puzzle and not just because, due to family allergies, this is the only way I can cuddle up with a cat! The depth it reaches is very deceptive; it looks light but plays deep and that’s very clever.

As with other abstract games of a similar ilk (think Sagrada and Azul), Calico requires a lot of forward-thinking in relation to a number of simultaneous, competing objectives and both your plans and ultimate success are dependent upon not only the luck of the tile draw but also the motivations of others. Whilst it is of course entirely possible to play an intense game of Calico in multiplayer solitaire mode, the added crunch really comes when you factor in your opponents; what tiles are they collecting?

Do they know what I am collecting? Are there any patches I can use? Will the placement of a patch achieve one of my goals but ruin all the others I have been building up through the course of the game? Would I be better off scrapping my goals and going for buttons and cats instead? Argh!

Now, this can be a nightmare for analysis paralysis sufferers and the sudden inability to commit can seriously affect the momentum and flow of the gameplay. On this basis, Calico probably won’t appeal to those who like fast-paced machine-gun style rounds and direct player interaction, or to those who dislike luck-driven experiences.

But, similar to other AP inducing games like duelling Battle Line, unique-euro Targi, and runaway bag-building successes like The Quacks of Quedlingburg, the blind panic and fist-shaking frustration these mechanics cause create an exquisite pain and dials up replayability to the max leaving fans desperate for more purrrrrrfect punishment.

Overall, Calico is a game with its claws out and I cannot wait to get scratched again!