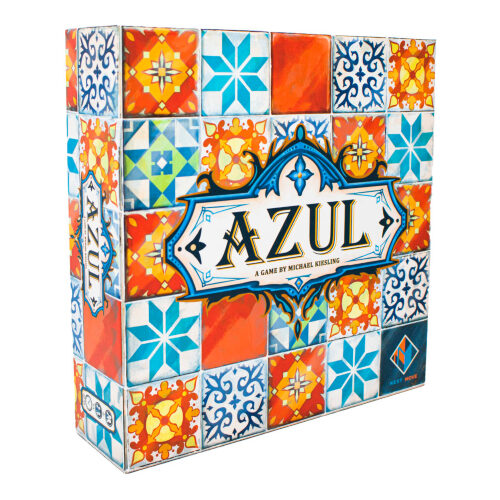 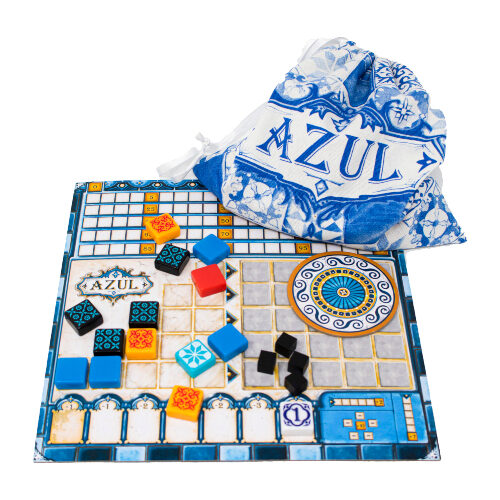 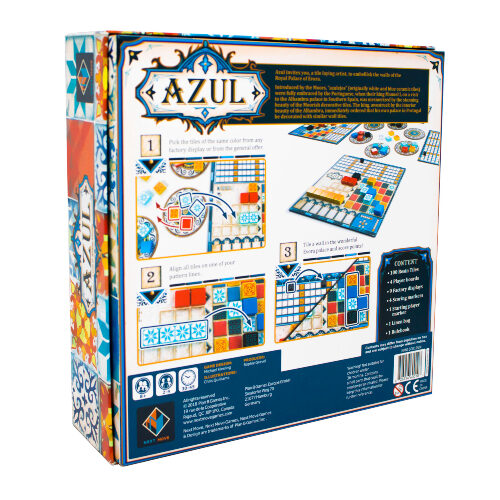 you could earn 3411 victory points

you could earn 3411 victory points

Designer Michael Kiesling and Plan B Games have created board game gold in Azul. This is a tile-drafting, pattern-building game, with set collection bonuses up for grabs. Here you’re decorating a palace with Moorish azulejo tiles. The Portuguese king has commissioned you with a 5x5 pattern. Azul is a challenge to see who can impress the king with their tiled walls!

Traditional azulejos are white and blue, but in Azul they come in five colours/patterns. And we’re not talking cardboard punchboards or wooden tokens for components. The 100 ‘Starburst’-sized azulejo tiles are bakelite material. They make a wonderful clacking noise when jangled in the cloth bag!

To start a round, four tiles get drawn from the bag and placed onto each ‘factory’. Players take turns drafting tiles from any factory of their choice. Whenever they pick tiles from a factory, they have to take all tiles of a matching type present there. Those they don’t draft join a new, separate factory. As the round wears on, this separate factory grows in size, but the drafting of tiles rule applies here, too. Players draft tiles until all factories sit empty.

You’re aiming to collect enough of one tile type to fill in thresholds on your player mat. At the end of each round, if you’ve filled up a threshold, you can stick said tile onto the wall! It’s like Sudoku; once you’ve filled one tile-type onto the wall, it can’t repeat on the same row or column. At first, you’ll collect tiles in a laid-back fashion. But the pinch closes in during later rounds. Your options start to become ever-more specific. Other players can take note of your predicaments. Elements of push-your-luck enter the fray. Especially considering there’s the chance you might get left with excess tiles you can’t place! These class as ‘smashed’ tiles… And that means minus-points!

Azul is a quick game to teach, and addictive to play. This fits the category of easy to learn, but tricky to master. It’s easy to see why Azul has become an overwhelming modern classic! Such is Azul’s wild success, it’s spawned two sequels already – Azul: Stained Glass of Sintra, and Azul: Summer Pavilion. Both scratch the same itch, with tile drafting being the core mechanism.

Plan B Games caught everyone's attention with Century: Spice Road and Golem Edition, so their next game was always going to be under the microscope. The announcement of Azul was met with cautious optimism by most. The game seemed to boast the great attention to detail and components as Century, but there was some fear that it might be too simple.

The first impressions I read seemed to be a little bit cool on the gameplay too, so I didn't rush to play the game myself... but once I did... well that would be telling. (Like you didn't immediately scroll to the bottom for the score anyway!)

In Azul, 2-4 players are drafting tiles to construct their own mosaic. There are some very clever mechanics to make this much more interesting than it sounds though! The drafting part works by placing four tiles on a certain number of factory tiles, dependant on player count. The tiles are randomly drawn from a bag and are made up of four different colours.

These tiles are then placed onto your player board on one of five rows. The top row can take one tile, the next one down two tiles and so on. The tiles you draft can only be placed on one row, and only tiles of one colour can be placed on any row you like. You don't have to complete the rows all in one turn though, but any that you have completed after all the tiles have been drafted add one tile to your mosaic on the same row. This then blocks off that row from being used for that colour for the rest of the game.

If you have picked too many tiles for a row then they fall into the waste row and give you minus points at the end of the game. Also, the first player tile always goes to the waste row. At the end of a round, scoring commences. Starting with your top row you move one tile from any completed row to your mosaic, scoring one point for that tile and each tile in a line touching that one horizontally and vertically.

There are point bonuses at the end of the game for getting five of one colour on to the mosaic and for completing rows and columns but as soon as someone completes a row the game will end that round. 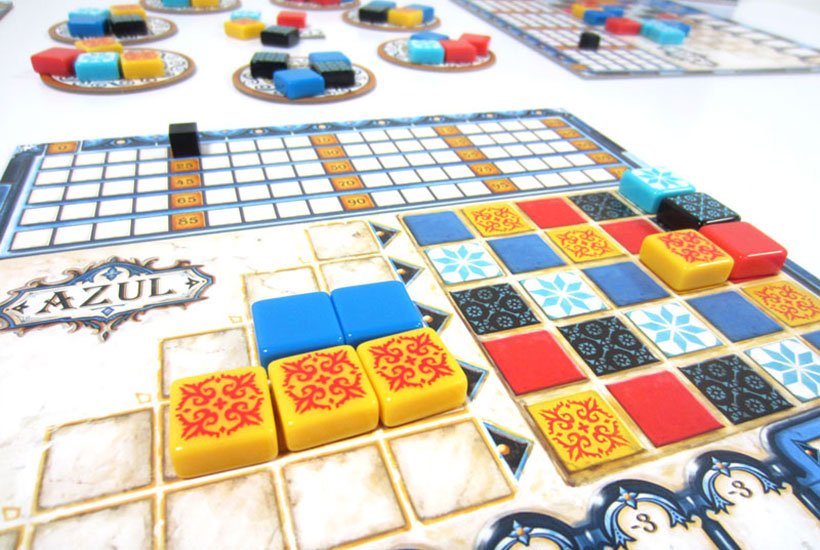 Azul is a fantastic game. The simple drafting and placement rules create a battle for the right number of tiles with the other players. You not only have to prioritise when you make your moves but also try and predict what the other players will prioritise. This can be to help your own plans or simply to hinder others. That's right, Azul looks pretty but can be a nasty game if people hate draft, that is deliberately take what you need or leave you in a position where you will take more tiles than you need.

This can be a turn off for some but I have generally found that players are more concerned with maximising their own points rather focusing on you. The game is very abstract but is beautiful and tactile thanks to the components. Bizarrely in the first printing the first player tile was cardboard instead of plastic, but in the second printing under the 'Next Move' logo the tile is the same plastic as the rest.

Playing Azul made me pay attention to it's designer Michael Kiesling. I have since been building up a healthy collection of his games and find the same elegance in them all.

Azul has gone done incredibly well with new gamers, with them grasping the concept within one turn and often beating me on their first turn. Now it's back in stock it absolutely deserves a place in anyone's collection.