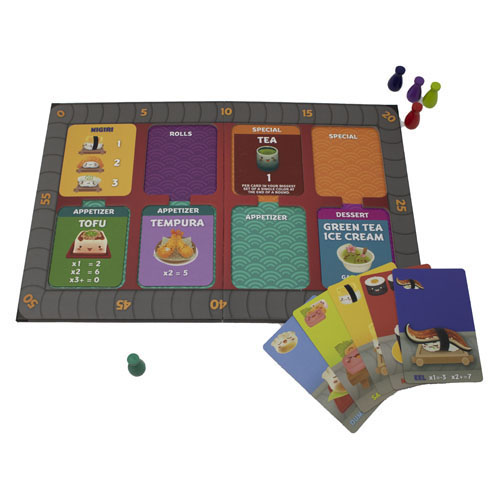 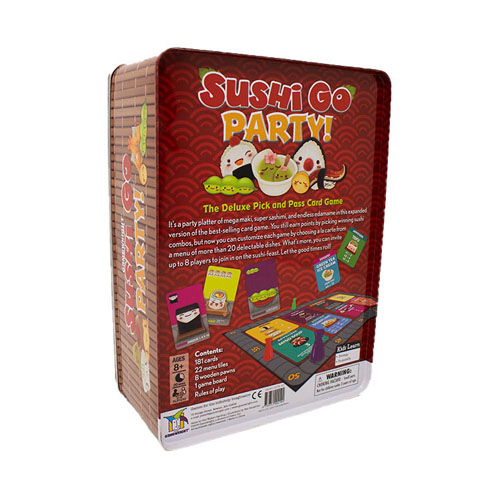 Perhaps you’ve heard of Sushi Go by Phil Walker-Harding, and are wondering how Sushi Go Party differs. Both are by Gamewright, both are card-drafting set collection games, and both are set in a sushi restaurant, where players are ‘grabbing’ dishes as they pass on a conveyor belt. Sushi Go Party, however, offers quite a bit more to chew on of the two – it’s definitely a ste…
Read More
Category Board Games Tags Best Sellers, Big Groups, CoiledSpring, Golden Pear, Great Gifts, Phil Walker-Harding, Podcast Approved, Sushi Party, Value For Money, Zatu Platinum Award SKU TCS-SUSHI_P Availability 5+ in stock
Share
Share this
90%

Perhaps you’ve heard of Sushi Go by Phil Walker-Harding, and are wondering how Sushi Go Party differs. Both are by Gamewright, both are card-drafting set collection games, and both are set in a sushi restaurant, where players are ‘grabbing’ dishes as they pass on a conveyor belt. Sushi Go Party, however, offers quite a bit more to chew on of the two – it’s definitely a step up with regards to variety in gameplay and strategy. It can also play up to eight players.

Each player starts with a hand of cards; simultaneously, they will all pick one card from that hand and reveal it face-up in front of them to keep. Then they’ll pass their hand to the player on their left. Now they pick a card from this new hand, reveal, and then pass that hand on once again, and so on until there are no more cards left. Once all cards have been played, then players add up their sets. The game lasts three rounds, with the combined score of each round being considered to determine an overall winner.

You’ll be aiming to collect sets of different sushi dishes, all of which are worth variable points. Some, like the Sashimi, are worth nothing on their own – but collect three of them and they’re worth 10 points. Others, like the Maki rolls, reward you for having the most of them come the end of the round, so while you’ll pick a card that’s great for you, you’ll also have to consider which cards you’re potentially gifting to your neighbour, or later on, their neighbour! There are also desserts, like the Green Tea Ice Cream, which are collected throughout, but only scored at the end-game.

In Sushi Go there are only eight different types of cards, but in Sushi Go Party there are 22 different cards, meaning you can pick a selection of which ones to play with (the rulebook suggests certain ‘menus’, or you can just decide your own variety). Often, this will result in an entirely different game each time, as players have to work out the value of dishes over others!

There is also a lovely score track to mark everyone’s progress, and it is, of course, a conveyor belt. We really applaud the theme of the sushi restaurant; it fits the mechanics of the game so well. It’s easy to compare Sushi Go Party to Antoine Bauza’s 7 Wonders (another card-drafting, set collection game themed around constructing ancient cities). However, of the two, we feel that Sushi Go Party is more likely to be a hit with a younger audience or a more casual crowd, with its bright, cheery colours and smiling, cartoony anthropomorphic food.

Players will create a "menu" from a selection of sushi rolls, appetisers, specials and desserts and try to score points over the course of three rounds. It is a great introductory game for non-gamers, whilst still being able to hold the attention of gamers.

Set-up in Sushi Go Party is straightforward. The game board is placed in the middle of the table, and all players take a pawn of their selected colour and place it on the zero score space. The menu is created by selecting three appetisers, two specials, a roll and a dessert. Nigiri is used in all menus/games.

The game comes with suggested menus that players can choose depending on the type of game they want to play, or they can randomly select the Menu. The respective Menu cards are placed in the designated slots on the main board and the corresponding cards are all shuffled together.

All players simultaneously take a single card from their hand and place it face down in front of them. Once all players have selected a card, everyone reveals and passes their hand to the player on the left. Keep doing this until all the cards have been played. All players count the points they have acquired in front of them and score the relevant number of points. Desserts do not score until the end of the game, they are the final course after all.

All cards (except the Dessert cards) are collected, new Desserts are added and shuffled in to the deck. A new hand is dealt and play continues this way until three rounds have been completed. After the third round scoring the Desserts are scored and the player with the most points is the winner.

Although the gameplay in Sushi Go Party is simple, the choices are not. Each card, or item on the menu, scores points in different ways. For example, nigiri scores either one, two, or three points depending on the type played. If wasabi is played first this multiplies the next nigiri played on it by three. Tempura scores five points, but only if you have two of them. Sashimi scores 10 points, but only if you have three of them. One dumpling scores you one point, two scores three points, three scores six points and so on.

Each item on the menu scores in a different way and there is plenty of variety. The special menu items mix up the gameplay, for example by allowing players to steal from another players hand by using the spoon. And the menu card allows players to draw four cards from the deck and pick one to play.

The dessert cards also score in different ways, for example, the green tea ice cream scores 12 points, but only if you have four of them. Pudding scores six points if you have the most, and the player with the least loses six points. There are a lot more items than I have discussed above. The replayability is high and there are lots of ways to score points.

Sushi Go Party is such a fantastic game. It is super easy to play and understand, the scoring is relatively easy and is displayed on the main board for all to see, the gameplay is smooth and quick, and it is a relatively cheap game to purchase. To top it off, the replayability is super high for such an inexpensive game.

I love Sushi Go Party. I have played this during my lunch hour with work colleagues (all non-gamers), as well as at the end of a board game club night, and with friends and family alike. It has always gone down well.

I like the fact that depending on the menu selected, the gameplay and how you play/score cards will change. This is what keeps the game fresh and engaging each time you play it. The pre-selected menus are a great addition to assist when selecting what items are to be used for each game.

I really enjoy Sushi Go Party. It's my go-to pick up and pass game for gamers and non-gamers alike. A game that will definitely be in my collection for a long time. If you're after an easy, fun and highly replayable game then Sushi Go Party is worth checking out.

Editors note: This blog was originally published on November 1st, 2018. Updated on December 7th, 2021 to improve the information available.