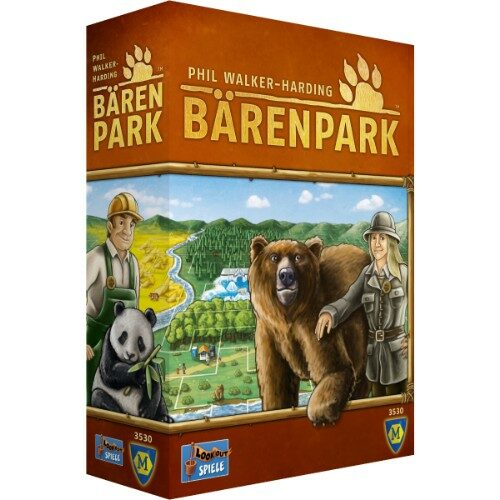 Translated from German, Phil Walker-Harding’s Bärenpark means ‘bear park’. Here, up to four players compete to see who can create the best zoo, which is dedicated to housing different subspecies of bear.

Bärenpark is a gratifying tile-drafting/tile-laying, set collection game by Lookout Spiele. Players start with a single 4x4 grid, the entrance to their park, all of which have different layouts. There are various icons on some of the squares, ranging from ‘level one’ wheelbarrows, ‘level two’ cement mixers, ‘level three’ diggers, as well as construction workers and barricaded pits.

On your turn you place a polyomino tile into your park adjacent to a previously placed tile, taking note of which icons you have covered up. For every icon covered, you get to take a bear enclosure tile of corresponding victory points value (as well as
varying size and shape). Some larger tiles are unique in shape, while others decrease in value, so there is a first-come-first-served nature at play.

However, the puzzle is that you cannot place any tiles in a way that covers up a pit. Instead, once the other 15 squares have been filled, this pit gains a golden bear statue, worth precious victory points. You need to get in early though, because they decrease in value, the later you complete them.

The ‘level one’ wheelbarrow tiles earn you small tiles, such as a 1x1 public restroom, a 2x1 kids’ play park, a 3x1 pathway or an L-shaped river. Neither of these are worth any points, but wow, do they help you out when you’re left with an awkward, specific-shaped hole to fill!

Covered up the construction workers? That means you can extend your park by adding a second 4x4 grid section adjacent to your bear park. The player to first successfully fill up four sections will trigger the end of the game – but the winner will be the person that has scored the most points.

Bärenpark has quite the racing element to it. There are also mini quests worth points upon completion to the first player to achieve them, such as placing, say, a certain number of polar bear enclosures within your park.

There are a lot of lovely things going on in Bärenpark. The artwork by Klemens Franz (of Agricola, Le Havre, and Isle of Skye fame, among many others) is cheerful and pleasant; it’s really quite simple to teach; and it has the bonus of having that added factor of the game ends with you marvelling at the individual zoo you’ve created, sitting there in front of you. Bärenpark has the kind of “Look at the pretty thing I’ve made!” factor, where you’re half-reluctant to take it apart afterwards, and put it back in box.

When you consider the other hugely popular, family-friendly games that Phil Walker- Harding has designed – the likes of Sushi Go!, Cacao, Imhotep, and more recently, Gizmos – it’s no wonder that Bärenpark is such a roaring success.

I'm not much into feng shui but there is something highly satisfying about making things fit. Whether it's the perverse relief of deleting that final phrase that takes you under the word limit on your latest essay, or finding that your new board game fits that space on your shelf perfectly, we all know the satisfaction of those moments.

In his popular game Patchwork, Uwe Rosenburg captured that feeling, tasking players with arranging tetromino style shapes to create a perfect duvet. In Cottage Garden and A Feast for Odin, Rosenburg used the system in slightly different ways again also catering for a heavier crowd with the latter.

Barenpark is firmly at the lighter end of this spectrum, offering the immediacy of Patchwork with up to four players. Each player will attempt to construct the most pleasing bear park, which we all know means the one with the least holes.

Unlike the Patchwork's goal to create the most nearly perfect duvet, Barenpark enables you to easily construct perfectly filled in areas. The challenge here is to be the most efficient at doing so...

Barenpark's box is choc full of cardboard and one of the poorest thought-out inserts you are ever likely to have seen. Once you have thrown the insert away you will find Barenpark's board has places clearly labeled for all its various shaped pieces (although one is wrongly labeled in this version - follow the rule book!). You lay out the boring but essential amenities, the standard and special bear enclosures and give each player a starting park.

What's really interesting is the way you acquire new pieces for your park. Each player starts with an amenity piece, which are useful for filling holes but don't score any points. They will lay this piece on their starting park in a way that covers at least one of the things pictured on it. These pictures relate to what tiles you will be able to take into your hand to place on future goes - amenities, standard or special enclosures or park expansions.

Each empty park tile also includes a hole that cannot be covered until the rest of the tile is full, at that point a player takes one of the bear statues and fills that hole. Bear statues, like the standard enclosures, are in a pile of decreasing value, meaning it's important to be speedy as well as efficient.

I'd also recommend including the 'advanced' achievements as soon as possible. Choose three of them to include in each game to give more point scoring opportunities and possibly make those amenities actually worth some points. Once a player has fully covered their four park areas the game ends and scores are totaled.

Barenpark is undoubtedly fun. The game starts off fairly breezy with players slowly building up and out their parks, but as the tiles become shorter in supply, and the spaces you need to fill more awkward, something changes. What at first was a fairly solitary affair, suddenly becomes a bit more cutthroat. I mean I don't need that last scoring tile, but I can see it would fit your park perfectly so maybe i'll just take it. In game where scores are fairly tight normally making someone have to pass a turn can be an effective strategy.

There is not much downtime as you are placing tiles from your hand so you are usually ready for your go. The only thing that might change is the tile you wanted being no longer available. This means games are usually brisk affairs with set up and tear down being noticeably more complex than the game itself...

Because Barenpark is a light and simple game. for all the charm of its art, the theme is not really there. You are essentially racing each other to complete a puzzle. Outside of the achievements, there are no concerns for how your park stands up as an actual attraction.

There are no rules about the required amount of toilets or cafes. No clever decisions about not placing certain bears to close to each other. And for most people that's fine, but for some the thin veneer of theme will be leave their stomach growling for more meaningful fare.

And yet I have had loads of fun with Barenpark. Despite the lightweight theme, I loved creating my own parks and loosely applying my own rules for rivers and toilets! It's been easy to teach and enjoyable to play. I don't think it quite replaces Patchwork in my collection but it happily sits alongside it.

I love this shop. The choice is huge, the prices great, and delivery really fast.

I love this shop. The choice is huge, the prices great, and delivery really fast.

Sorry, Incannot review as this a Xmas gift

Sorry, Incannot review as this a Xmas gift

Great product, great price and great service. I love Carcassonne and Zatu is my go to shop for cheap expansion packs.

Great product, great price and great service. I love Carcassonne and Zatu is my go to shop for cheap expansion packs.

Brilliant and quick to arrive. Really lovely quality games...have yet to play King domino as it is a Christmas present...but I bought dragonwood last year and we love it!

Brilliant and quick to arrive. Really lovely quality games...have yet to play King domino as it is a Christmas present...but I bought dragonwood last year and we love it!

Service was excellent thank you. We know Dobble is very popular with our nieces so we bought the version for younger children for our grandchildren and great nephew as Christmas presents. We are sure they’ll enjoy it too.

Service was excellent thank you. We know Dobble is very popular with our nieces so we bought the version for younger children for our grandchildren and great nephew as Christmas presents. We are sure they’ll enjoy it too.