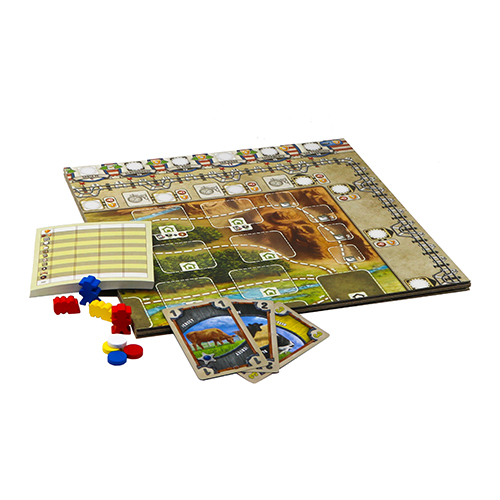 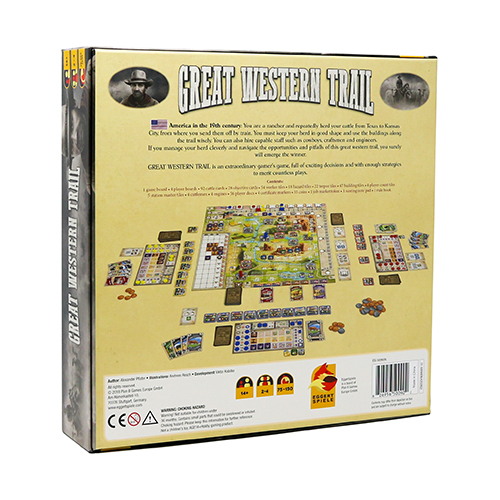 Pay in 3 interest-free payments on eligible purchases. Learn more
Success! We will let you know when this product is available again.
Your email address has been unsubscribed!
Your email address has been unsubscribed!
Notify me when this product is available to purchase!
This email address is already subscribed to this product!
America in the 19th century: You are a rancher and repeatedly herd your cattle from Texas to Kansas City, where you send them off by train. This earns you money and victory points. Needless to say, each time you arrive in Kansas City, you want to have your most valuable cattle in tow. However, the Great Western Trail not only requires that you keep your herd in good shape, but also …
Read More
Category Board Games Tags Alexander Pfister, Best Sellers, BGG Top 100, Eurogames 2020, Golden Pear, Pegasus Spiele, Value For Money, Zatu Platinum Award SKU ZBG-PEG54590G Availability Out of stock
Share
Share this
90%

Great Western Trail is one of the most popular and well-respected modern board games. This is a Euro-style game from designer Alexander Pfister, published by Pegasus Spiele. Up to four players take on the roles of United States cattle ranchers in 19th century. You herd your cows along the ‘Great Western Trail’, terminating at Kansas City. There’s a train waiting to transport your moo-moos off around the country…

There’s a delightful number of mechanisms that dovetail in Great Western Trail. At the heart of things lies deck-building and hand management. You start with a default, low-value hand of different cattle types. The aim is to manipulate your hand so that when you reach Kansas City, you have a hand of unique cattle. That scores you cash, and it also determines how far you can ship them on the train line. You’ll want to deliver to unique destinations, for the top end-game benefits.

The board is like a giant rondel in some ways. On your turn you move along the trail, in a point-to-point fashion. You execute the action on the spot you land on. Some places let you buy more cattle from an open market. Others let you hire cowboys (to buy better cows), craftsmen (to place buildings on the trail) or engineers (to move your own train along the track). Some places let you add your own buildings to trail. This lengthens the route to Kansas, but provides passive and active benefits to you!

The more times you drop cattle off at Kansas, the more features you unlock on your player mat. The further along the track you progress your train, the better your train deliveries. There’s so much to love about Great Western Trail – no wonder it’s ranked as the 10th best board game of all time*.

*According to boardgamegeek.com at the time of writing

As 2016 herded out flashy titles such as Scythe, Star Wars: Rebellion, and SeaFall, Alexander Pfister's Great Western Trail stripped back the shiny exterior of its hyped brethren and let players truly revel in the magic below the surface.

Whilst by no means an ugly game (ignoring the deeply unsettling gaze of the terrifying trio gracing the box), Great Western Trail promotes substance over style. Pfister's elegant design is a humbling reminder that it was innovative gameplay and clever mechanics that drew me into the hobby, not stylised plastic or elaborate stretch goals.

So, it's About Cows?

Great Western Trail sees players taking on the role of 19th-century cattle herders, travelling from Texas to Kansas City with hopes of sending off the greatest variety of cows. Along the trail, your ranchers will visit various buildings, sell the occasional cow, clear hazards - or perhaps hire more workers to construct new buildings, expand the railroads, or improve your ever-growing herd.

Your herd is represented by a small deck of cards, with players possessing the same mix of cows at the start of the game. In a traditional deck-building manner, you will optimise the cards in your hand by purchasing higher value cows from markets along the trail, adding them to your deck to draw on future turns.

The cow cards come in nine different colours, with the grey Jersey cows being the least valuable and the purple Texas Longhorns being the most. The catch is that upon delivery you will only profit from each unique cow in your hand. This forces players to sell off any duplicates beforehand at various buildings in return for a small sum of money and the opportunity to draw new cows as they replenish their hands.

But this trail is one way only. You will eventually reach Kansas, sell your cows, and deliver them as far as their value takes them. Selling an impressive hand might grant you 18 or more dollars, enough to place one of your player markers on the high scoring San Francisco, whilst poor herds may result in delivering to cities worth negative victory points.

Turns are short and sweet; move up to three spaces and perform one or two actions as depicted on the tile. Upkeep is similarly slick, occurring only when a player reaches Kansas and requiring just a quick placement of tiles. This makes a refreshing change from many other Euros where strict, predetermined upkeep phases often have a jarring effect on gameplay.

First glances at the game's dense iconography and wealth of components could suggest an unforgiving, heavy game. Yet, whilst it's certainly not a light game, the simple turn-by-turn process gently eases players into its vast plains, dropping key information along the trail and ensuring a good understanding of how the game works upon players' first trips to Kansas.

This elegant flow of gameplay allows players to feel a sense of satisfaction at their mastery of the game's interlocking mechanisms, and their own strategies, making for a hugely rewarding experience you'll want to revisit again and again.

The bewildering mix of deck-building, tile-placement, hand-management, and point-to-point movement somehow never becomes too complex. At times you may feel overwhelmed by choices, but ultimately your actions make sense. Decisions of where to deliver your cows seamlessly lead to more decisions on whether to increase your hand size or your movement points and which actions to reveal on your player board.

Pfister's design is a testament to how new games can continue to refine and adapt familiar concepts, and stylishly highlights the longevity and creativity of the industry.

Why Should I Play?

So many heavy Euros are lacking in accessibility. Not only in terms of complexity but also their cost, or sometimes even their availability. Great Western Trail will more than scratch that Euro itch, without frying your brain or your bank balance, with it commonly retailing at less than £40.

For this price, you get an elegant and intuitive experience sure to remind you of just how clever games can be. Furthermore, Great Western Trail offers a decent amount of replayability to an already addictive game, with its various starting setups and double-sided building tiles.

The components are relatively polished but functional, and the art style injects just the right amount of theme. You can't go wrong with a cowboy meeple and it helps make the game stand out from the arguably overused themes of Medieval building or European trading.

If You Weren't Convinced Enough…

Great Western Trail mimics the freedom and vastness of the old west, letting players choose their own routes to victory. You might be happy with your lowly herd and choose to make a living installing train stations, employing your workers as station masters for end game bonuses. Perhaps you'll move into the construction business, capitalising on the land and forcing players to pay you as they trudge through each of your ten potential properties. Either way, it's down to you.

The way the game pans out is largely left in the hands of the players. Eager for more player interaction? Construct more buildings. Do you want to quickly finish the game before someone else does? Sprint for Kansas! Maybe you need a couple more turns to grasp those few extra points. Make sure you lay down hazards before filling the worker column which acts as the game's timer.

Even refilling the market of cow cards is largely down to players, with this only happening automatically twice during the game.

If I hadn't sold it enough, Great Western Trail is a truly excellent game worthy of a place in your collection. If you're looking for a slick but meaty Euro game that stands out from the competition, you can't go wrong with this bovine brain tickler. So saddle up, grab a partner (or three), and get on down that trail!

2021 also brought us Great Western Trail Second Edition, featuring new art, better quality components, a mini-expansion, and a solo mode. Perfect for fans of the original or anyone who enjoys some solo board gaming.