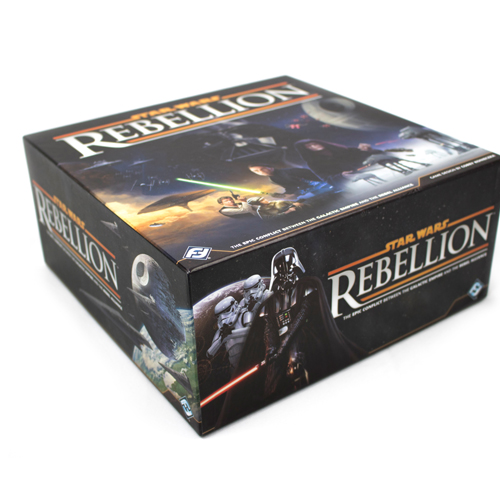 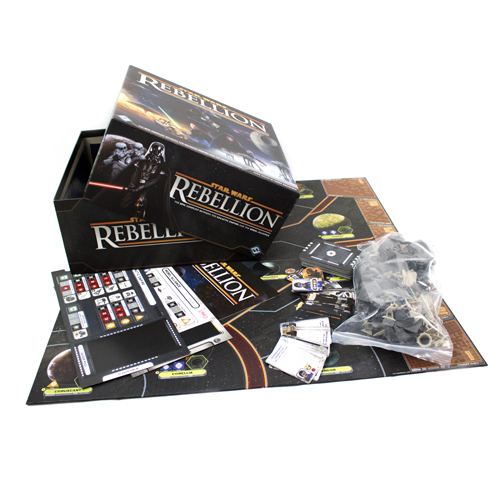 you could earn 7739 victory points

you could earn 7739 victory points

If you are looking for an epic Star Wars in a box experience you may as well just hit add to cart right now. Star Wars Rebellion is a grand zoomed out game of cat and mouse across the galaxy. One team will take control of the smaller and weaker Rebel Alliance. Their job is to evade the Empire while lobbying other planets to join the revolt. You are outmatched by a well sourced, funded and evil Imperial Empire, so causing a galaxy wide revolt is your only chance!
The Imperial Empire player just has to find the Rebel base and destroy it. With their legends of Stormtroopers and superior numbers in almost everything this should be a walk in the Endorian Forest… right?

The board features a map of the galaxy, with planets and systems that fans of the franchise will recognise and relish. At the start of the game the Rebel player will secretly decide which planet their base will start on. Hoth? Right. I mean it’s got to be Hoth for the classic double bluff? Yet even if your double bluff fails you can up and move before the Empire has time to amass it’s forces and then mouse hunt will start again,

It isn’t just the grand scale that plays out in Rebellion though. Each side has access to leaders, classic characters from the saga that will help sway the battle by taking on secret missions, and living out classic moments from the original trilogy or making new ones completely.

Featuring over 150 plastic miniatures of the films iconic vehicles this is a game for players and collectors both. Once you have finished your first play you will no doubt want to swap sides and go again! May the force be with you!

"Use the force Luke!"

"I'm trying father but it's rusted shut and this spanner is giving me a blister."

First off, I have two confessions. The first is (and you may have already noticed) I'm not a huge Star Wars fan. I like it, I'm just not fanatical about it. The second I'll get to later.

'Star Wars Rebellion' is essentially a two team cat-and-mouse game where you play as either the Empire (who has to find the rebel base before the rebels either win over the minds of the people) or the Rebels (who have a massively inferior army so try to survive until they've become more popular than the Empire).

The premise is simple: The Rebels locate their base on a planet of their choice and keep it hidden and the Empire have to find, land on whichever planet it's based (which automatically draws out their army) and defeat it.

The Empire is a massive war machine, which starts with a big army that gets bigger, turn after turn and sends out probes, leaders and forces to eliminate planets from the possibilities of where the rebel scum are hiding. The Rebels are a rag-tag bunch of lovable rogues that in turn, do roughly the same but in a bid to expand their popularity throughout the galaxy and play mind games with the Empire: 'Did they move there to protect the planet or gain influence?', 'Did they deploy for a reason or as a cunning ruse?' etc.

Gameplay includes carrying out missions which require leaders with the requisite abilities to gain favour, capture or subjugate planets or capture other leaders. Battles and fleet movement are a cleverly balanced cat-and-mouse where a leader must be present to pull the forces to a system but once there - they can't leave again whilst a leader is present - something the Rebels get to use to great advantage. The Empire on the other hand - have a weapon that can blow up entire planets. This, on top of the 'bluff' mechanic, makes for quite a tactical night ahead.

And it's a huge game, particularly for an essentially 'two-player' game but that's one of the things that attracted me to it - it's good to have something a bit more meaty to get into on a wet and windy Friday night if most of your friends are all out celebrating any excuse to celebrate by going out.

As you'd expect, there's basically two of everything, from miniature armies to mission decks to battle types (air and ground) and dice colours. There's even two parts to the enormous game board and (tenuously) parts to the box - which is fairly weighty and needs to be lifted with two hands. The game itself can be played with either two or four players although I prefer the two player variant as it's quicker, there's less arguing and the victory (or defeat) is amplified, so there's more to play for.

It's a fairly heft box and it's chock full of stuff. The miniatures, whilst I felt they were nicely detailed - the death stars (there are three) even need to be assembled and sit gloriously upon their own stands - are overall a bit small and feel brittle (and would not suffer being leant or stood on) the troopers and X-Wings particularly so - presumably, so they all fit in the box and on the board but I think that, that could have been rectified by making the planets slightly larger. It's testament to the look and feel of the game however, that while unpacking said box, I found it impossible not to hum the theme tune - which lasted a while as it has a fair bit to set up before you can finally get your teeth into it. The art style is definitely based on the films, with each character resembling a painted version of their respective photograph and each ship a faithful reproduction.

And that brings me to my second confession: It took the best part of two and a half games, to actually be able to play and enjoy the game. A fact I blame entirely on the 'Learn To Play' manual which was clearly written by and/or for particle physicist students on their 2nd post-grad, while on a gap year from an English language doctorate. Well, not quite but it clearly wasn't written to be plainly understood - why use three words when twenty seven will do! Sorry, I meant 'Why does one, in transit to a second, pose that a sentence may be structured (see Appendix. 27a) so as to elongate the sentence in gratitude to the words (paragraph c), given, a total to be numbered no less than twenty and six and no more than one less than twenty plus nine!'

And yet, for all it's massively over-wordy two-manual setup, it's a fairly simple game that once you've grasped the basic concept, let's you sit back and enjoy your time at the table. Less of a war game than the miniatures would suggest, 'Rebellion' is much more tactical and enjoys a 'poker face' strategy which amplifies as the game progresses and the Empire inevitably closes in. For whilst the Rebels try not to give away the base location - the Empire hides it's probe results for fear of the rebels relocating the base - thus any telltale signs are potential downfall. That's the true joy of the game for me and I'd imagine it to be even more fantastic if you were a hardened Star Wars fan.

If you plan on reading the boxed manuals, instead of turning to the web or (in my case, asking) a friend for help - My advice would be to ignore the rule where upon, knowingly or unknowingly if you break a rule - you automatically forfeit the game, at least until you've become a bit more fluent in the gameplay. It's a fairly redundant rule anyway - if you unknowingly break a rule - how do you know you've just lost unless someone uses it to their advantage for an instant win? Particularly as you'll most likely be playing with a friend, who'll be quick to point out 'You can't do that!' before you've done it anyway.

If I have any gripes (apart from the manuals) it would be that the game feels restricted to the movies, as opposed to the whole Star Wars universe, as most of the missions are based on things you've seen in the movies rather than the possibility of including the cartoon or graphic novel universe as well. This narrows down the scope of the game, for good or bad but maybe those will turn up in expansions in future, who knows? I'd also have liked slightly bigger miniatures (and I'm an artist, with 'piano players hands' so big fingers or dexterity aren't an issue for me) and slightly bigger cards, particularly the probe and battle decks.

Whether you instinctively hum 'Dun duuuun dun-dun-DUN-duuun' or 'Dun dun dun, dun-da-dun, dun-da-dun'' upon hearing the words 'Star' and 'Wars' together (and in that order) 'Star Wars Rebellion' is a game that will entertain you and leave you feeling like you either single-handily saved or destroyed the galaxy.