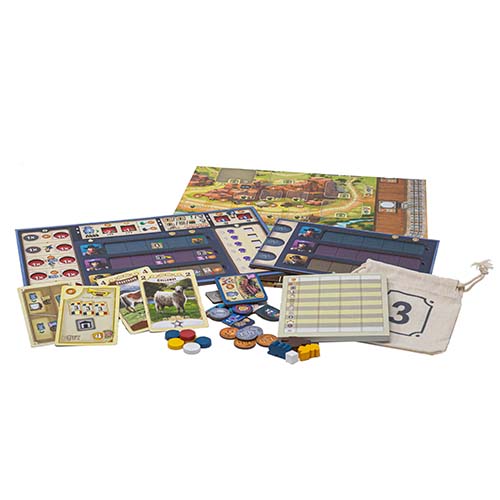 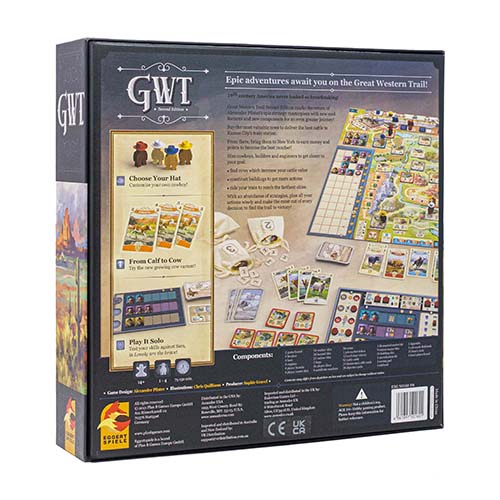 you could earn 3109 victory points

you could earn 3109 victory points

Great Western Trail, or ‘GWT’ to its fans, is a tried-and-tested modern classic of a game. Designer Alexander Pfister is now regarded as one of the industry’s top minds when it comes to creating marvellous Euro-style titles. This is the second edition of Great Western Trail, published by Plan B and Eggertspiele.

The core of Great Western Trail passes over from v1.0 to 2.0 – you’re still playing as rival cattle ranchers. You move along the trail itself (which is a bit like a giant rondel), selecting which action to take. You’re juggling hand management, deck-building, set collection, and your finances. You want to have a hand of unique cattle cards by the time you reach the trail’s end (Kansas City).

What’s new in Great Western Trail 2.0, then? This isn’t a mere art refresh. (Although, that’s always welcome! The hazards, for one, are no longer Native American teepees, but Caucasian bandits.) The game now has much-coveted dual-layered player boards, so the discs and cubes don’t slide about as much. There’s also a new solo mode, as well as new private buildings for each player. There’s also a mini-expansion with maturing Simmental cows. You buy these as calves, but if you have one in your hand when you reach Kansas you swap it out for a value-two Simmental (and later on a value-3, if you do it again).

And even more great news? This second edition of Great Western Trail is set to be the first of a new trilogy of games! If that doesn’t make you go yeeeee-haww! then nothing will…

Great Western Trail is one of my favourite games. It is a permanent fixture in my top 5. So, when a second edition was announced I was interested but also a little peeved, it seemed a little too quick. Of course, this isn't just a reprint, but the start of a trilogy of games using the solid mechanisms found in GWT.

The vast majority of Great Western Trail 2nd Edition remains the same, with a few tweaks and a little smoothing. It has been given a lick of paint all over and given a sleeker design in line with the visual for the intended trilogy. On top of that, a solo mode has been added, along with some new cattle!

Start Of The Trail

If this is your first dabble into the cattle rearing west, then you need to know what to expect. Through a combination of deck building, rondel movement, set collection and careful planning. You will attempt to build up the trail, breed cows and sell them far and wide.

On your turn, you will move up to your limit, which can be improved on your player board. Landing on a neutral or one of your buildings will allow you to activate the actions on those buildings. But landing on an opponent's building only lets you use a basic action.

Placement of your buildings will be crucial as some require opponents to pay you to move over them let alone use them and you can force your opponents into some tough decisions on their route up the trail.

I mention a rondel earlier as this is what GWT reminds me of most. Usually, rondel is circles and fairly fixed in nature. Given that once you reach the top of the board you come right back down to the bottom it does seem like GWT offers an editable and growing rondel of actions.

The Good, The Bad And The…

Actions on offer will allow to build new buildings, buy new cattle, hire workers, gain coins and more. Often the strength of these actions is determined by the number of relevant workers that you have access to.

Moving your train further up the track will allow you cheaper access to further cities to sell your cows but to sell your cows you need to have a variety in your hand. Two of the same type will only count once towards the distance you can travel once. Each station has a numerical value, add the value of your cows to reach further and further.

This is where the deckbuilding comes in. Ideally, you want a good mix of cows, but a lot of the actions reward you for discarding two cards the same. Do you grab a load of cards that are the same risking a bad sale or mix them up and have potentially fewer actions?

This new printing actually comes with an insert this time. As with the inserts in some of Plan B's other games it just doesn't hold things in place. Otherwise, the components are mostly good. With dual-layered boards that function well, yet bizarrely don't have a dual-layer for the 2 and 3 player adjustment. It is not a big deal but just seems odd with the rest of the things that have been considered.

The additions to gameplay are mostly small, with exchange tokens and a new breed of cattle the biggest of them. The exchange tokens are very welcome giving you more options and the ability to

run through your deck quicker. A welcome addition that I think was part of the expansion for the first printing.

The new breed of cattle is cool too. Bringing calves that actually get older as the game goes on into the mix. It's a fun addition that is easy to add and brings more than you might think to the game.

GWT 2nd Ed also brings an official solo mode to the game. This is a point chasing affair but an actual automated opponent with difficulty levels and ways to tweak the difficulty further should you become adept at beating the AI.

Player interaction works at a good level with buildings you build causing the route to be longer, and also adding potential costs for the other players. The cow market can become quickly depleted if you dally and competition to place out station masters is fierce.

Truth be told it's hard to remember the older game in comparison. From memory, it does seem easier to rattle through your deck, and the exchange tokens certainly help with this, but I also may just be better at the game!

Whatever the reason it has made a welcome return to my table, and I am thoroughly enjoying the gameplay once again. The mix of mechanisms, combined with multiple strategies to try and tame and the pleasing movement around the western style rondel make for an excellent experience. It is absolutely one of my top games of all time.