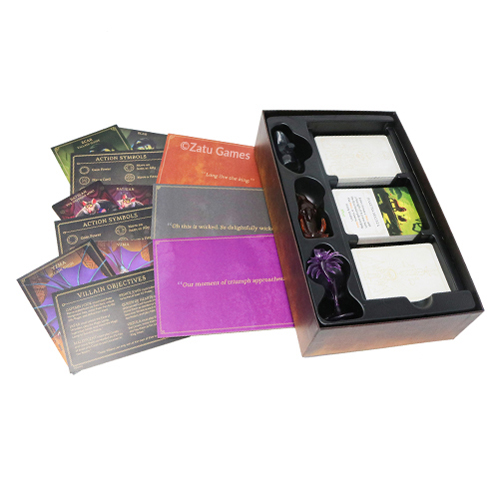 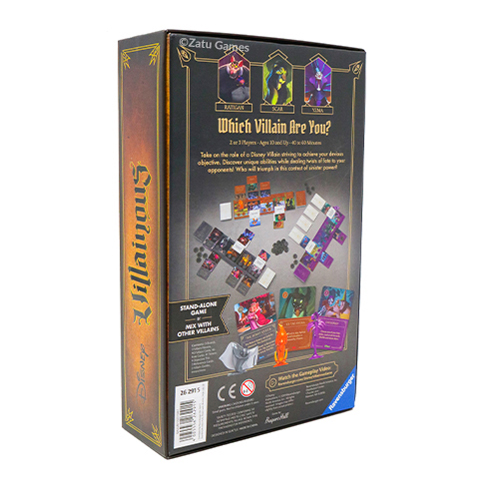 In Disney Villainous: Evil Comes Prepared, each player takes control of one of three Disney characters, each one a villain in a different Disney movie, specifically Scar from The Lion King, Yzma from The Emperor’s New Groove, and Ratigan from The Great Mouse Detective. Each player has their own villain deck, fate deck, player board, and 3D character. On a turn, the active play…
Read More
Category Board Games Tags Disney, Disney: Villainous, Ravensburger, Zatu Silver Award SKU TRV-26291 Availability 5+ in stock
Share
Share this
75%

In Disney Villainous: Evil Comes Prepared, each player takes control of one of three Disney characters, each one a villain in a different Disney movie, specifically Scar from The Lion King, Yzma from The Emperor's New Groove, and Ratigan from The Great Mouse Detective. Each player has their own villain deck, fate deck, player board, and 3D character.

On a turn, the active player moves their character to a different location on their player board, takes one or more of the actions visible on that space (often by playing cards from their hand), then refills their hand to four cards. Cards are allies, items, effects, and conditions. You need to use your cards to fulfill your unique win condition.

One of the actions allows you to choose another player, draw two cards from that player's fate deck, then play one of them on that player's board, covering two of the four action spaces on one of that player's locations. The fate deck contains heroes, items, and effects from that villain's movie, and these cards allow other players to mess with that particular villain.

Disney Villainous is a 2-6 player competitive game in which you get to play as the bad guy! Working on your own nefarious plot, you’ll aim to complete an objective befitting your choice of Villain. If you’re unfamiliar with Disney Villainous, check out this review post by Lauren Campbell! Today, we're reviewing the latest expansion, Evil Comes Prepared. What’s great about the Disney Villainous Expansions is that you can also play them as standalone games for 2-3 players. You don’t need to own the base game! This means one of the expansions can be the perfect way to try the game before committing to the others. However, bear in mind that gameplay can feel much nicer with a higher player count, as there’s more opportunity for player interaction. In a 2 player game, you’re the sole option for your opponent's ‘fate’ attacks and this can become irksome. The main appeal of each Villainous expansion is, of course, the new playable Villains…

Watch out! Evil Comes Prepared brings with it the Treacherous Scar, whom I’ve never quite managed to forgive, from the beloved The Lion King; Evil Sorceress Yzma, from The Emperor's New Groove; and an unusual choice, but a great addition, Crime Lord Ratigan from The Great Mouse Detective. The choices here feel slightly more obscure which is great because they’re bound to be somebody’s favourite. It’s time to give some of those lesser known villains the limelight! The gameplay works exactly as in other Villainous titles, with each villain working towards their own objective to be declared the winner. If you're new to Villainous gameplay check out this handy How-To-Play article. The Evil Comes Prepared expansion adds some interesting dynamics. All three of these villains have a twist thrown into their schemes, keeping you on your toes, but some objectives do feel much more easily attainable than others.

As with the other expansions, Evil Come Prepared features three new objectives: Each of these new objectives most certainly have their challenges! Whilst Scar’s objective seems relatively simple, he can only begin working towards it once he has found and defeated Mufasa. Ratigan’s objective can switch once Basil is revealed from the Fate Deck, effectively rendering his previous plot useless. And Yzma has four mini Fate Decks which she must search in order to locate Kuzco, and if Kronk is moved too much he stops being an Ally and transforms into a Hero! These objectives add new dynamics and strategy into the game. Whilst you want to be able to ‘fate’ your opponents to hinder their progress, you may well end up doing the opposite, so each attack becomes a risk. For the most part, this feels well-weighted and makes sense during gameplay, but at times (particularly with Scar) you end up helping far more by ‘fating’ than if you hadn’t. I almost wish there was an option to not play a fate card if neither of the two appealed but alas, those are not the rules and pesky Scar has bested me more than once as a result.

As with every Villainous game I have encountered, the components here are great. Personally, the only gripe I have is that Ratigan just doesn’t feel as nice as the other tokens. I’m not sure if it’s the colour or shape, but something about him feels a bit cheaper than the rest. The player boards are reminiscent of the films without being direct stills and the artwork on the cards doesn’t disappoint. I particularly like the design of the back of Scar’s deck!

We Got a Bone to Pick With You!

One other thing perhaps worth mentioning, whilst neither positive or negative, is that Scar’s deck doesn’t have much variety compared to the rest of the Villains in the series. It may well only be by a few cards, but it’s quite noticeable. It makes sense in terms of his objective and his character, but it wasn’t as much fun to draw a new card/cards into your hand with him.

I think this expansion brings with it some interesting developments to the game, and a great opportunity to mix things up if you own the previous expansions. The new objectives are more complex and require careful planning and risk management. Honestly, this one wasn’t my favourite expansion. However, there are some decent options within this game that pose a threat for the tougher characters in other expansions. For example, I think Yzma with her four differing Fate Decks would be well suited to playing against The Evil Queen from the Wicked to the Core expansion. Both characters have multifaceted objectives, and require a certain level of cunning to excel. That’s not to say I wouldn’t want it in my collection. It’s still a great addition and a great stand-alone with all the villains being fairly evenly-matched. Sometimes, the luck of the draw just really affects how easy one's objective may be. If you’re not sure about Evil Comes Prepared, check out Perfectly Wretched and, my favourite, Wicked to the Core!