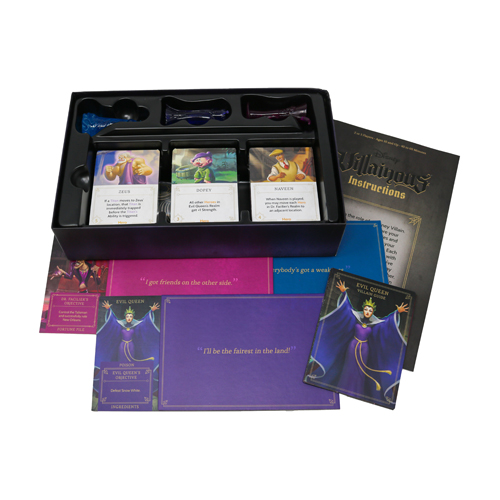 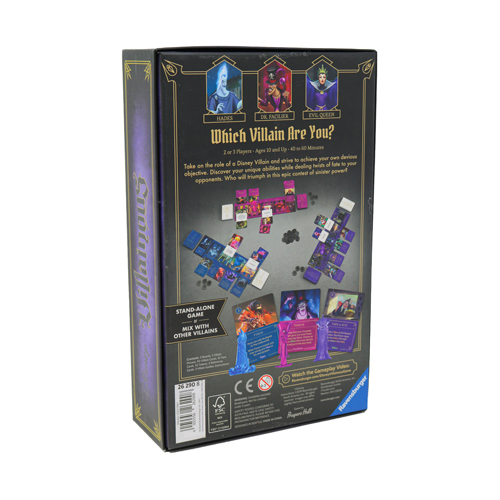 In Villainous: Wicked to the Core, each player takes control of one of three Disney characters, each one a villain in a different Disney movie, specifically the Evil Queen from Snow White, Hades from Hercules, and Dr. Facilier from The Princess and the Frog. Each player has their own villain deck, fate deck, player board, and 3D character. On a turn, the active player moves their ch…
Read More
Category Board Games Tags 9+, Disney, Disney: Villainous, Ravensburger SKU TRV-26290 Availability 2 in stock
Share
Share this
85%

In Villainous: Wicked to the Core, each player takes control of one of three Disney characters, each one a villain in a different Disney movie, specifically the Evil Queen from Snow White, Hades from Hercules, and Dr. Facilier from The Princess and the Frog. Each player has their own villain deck, fate deck, player board, and 3D character. On a turn, the active player moves their character to a different location on their player board, takes one or more of the actions visible on that space (often by playing cards from their hand), then refills their hand to four cards. Cards are allies, items, effects, and conditions. You need to use your cards to fulfill your unique win condition. One of the actions allows you to choose another player, draw two cards from that player's fate deck, then play one of them on that player's board, covering two of the four action spaces on one of that player's locations. The fate deck contains heroes, items, and effects from that villain's movie, and these cards allow other players to mess with that particular villain. Villainous: Wicked to the Core is playable on its own, and its characters can also face off against those in the Villainous base game from 2018.

Disney Villainous is a 2-6 player competitive game in which you get to play as the bad guy! In the Wicked To The Core expansion, working on your own nefarious plot, you’ll aim to complete an objective befitting your choice of Villain. If you’re unfamiliar with Disney Villainous, check out this review post by Lauren Campbell! What’s great about the Disney Villainous Expansions is that they can also be played as standalone games for 2-3 players. You don’t need to own the base game, which means one of the expansions can be the perfect way to try the game before committing to the others. However, do bear in mind that gameplay can feel much nicer with a higher player count, as there’s more opportunity for player interaction. In a 2 player game you’re the sole option for ‘fate’ attacks which can become irksome. The main appeal of each Villainous expansion is, of course, the new playable Villains…

Wicked to the Core Expansion

The first expansion, Wicked to the Core, brings with it some excellent villain choices. From the first animated feature film Snow White, the truly wicked Evil Queen. The loveable yet loathable God of the Underworld, Hades from Hercules, and the power hungry witch-doctor Dr. Facilier, from the Princess and the Frog. The gameplay works exactly as in other Villainous titles, with each villain working towards their own objective to be declared the winner. If you're new to Villainous gameplay check out this How-To-Play. These new villains have similar gameplay styles to the base game and, unlike other expansions, it doesn’t feel as though new mechanics are being introduced. That being said, this expansion was really enjoyable and felt very well-balanced in terms of difficulty.

“Who is the Fairest One of All?”

Wicked To The Core features three new objectives: I love these new objectives. I particularly found the Evil Queen wonderful to play. These objectives are not quite as simple as they seem, of course. Before the Evil Queen may defeat Snow White, she must first play 4 unique ingredients in order to brew her poison. All the while, those seven dwarfs will be thwarting her plans, boosting Snow White’s strength significantly. Poor Dr. Facilier has the potential to rule, but only if he can use his powers to align his fortune. One wrong move from a fated attack can prevent a carefully planned strategy! And whilst Hades’ objective is the most straight-forward, there are plenty of opportunities to defeat the Titans. And you’ll want to do so early. Those guys have some powerful moves once they’re moving closer to Olympus. All three of these journeys are so captivating that you can often be so into your own plan, that you forget to ‘fate’ and scupper the others plans... but in all three it’s so vital! You need to keep your eye on the ball in this game and make sure you’re a few steps ahead of your opponents in order to succeed... because they probably have something nasty in store for you!

As with the other expansions and the base game, the components are of high quality. The art work on the cards and player boards evokes the movies. The player pieces feel and look like collectables. There’s something magical about holding these forces of evil in your hand, ready to unleash their powers on your opponents!

Final Thoughts on Wicked to the Core

I was really impressed with the Wicked to the Core expansion. To me, the interchangeability with the base game works superbly with these three additions, without having to worry about the difficulty levels. Though certain villains need a more strategic approach, they feel well-weighted against each other, and none of the three felt easy by any means. Gameplay times reflected what was intended, a 40-60 minute game. Conversely, Perfectly Wretched had us playing for over 180 minutes in one game, which felt like a tough slog by the end. This expansion also played really well in a two-player game. We both always felt engaged in our own plots, yet stayed keenly aware of the need to ‘fate’ each other in order to falter the other’s plans. You need to stay aware of damage control, but none of the attacks seemed to devastate our strategies, rather just temporarily set us back. As with all of the Villainous titles, a certain amount can depend on the luck of the draw. This game, however, seems to balance luck and strategy so things felt fair. The Wicked to the Core expansion, for me, is a must have for the Disney Villainous family (I’m not going to lie...they all are). But it’s my favourite. It has a great mix of love-to-hate bad guys and plays well at both the lower and higher player counts. However, if you’re not sure about these three, why not check out Perfectly Wretched and Evil Comes Prepared?