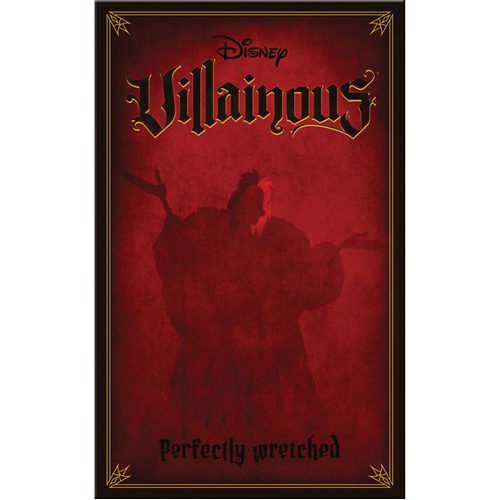 you could earn 2018 victory points

you could earn 2018 victory points

Add to Wishlist
In Disney Villainous: Perfectly Wretched, each player takes control of one of three Disney characters, each one a villain in a different Disney movie, specifically Cruella de Vil from 101 Dalmatians, Mother Gothel from Tangled, and Pete from Steamboat Willie. Each player has their own villain deck, fate deck, player board, and 3D character. On a turn, the active player moves their c…
Read More
Category Board Games Tags Disney, Disney: Villainous, Ravensburger, Silver SKU TRV-26843 Availability 5+ in stock
Share this
79%

Disney Villainous from Ravensburger saw players as villains from popular movies. Disney Villainous: Perfectly Wretched is both an expansion and a standalone game. You can play it as a 2-3 player game in its own right. You can also get your evil on by combining it with the main game, or the other expansions. This means you can combine up to six villains, all cackling their way to victory!

In Disney Villainous: Perfectly Wretched, the core gameplay remains. Each player plays as a different villain: Cruella de Vil (101 Dalmatians), Mother Gothel (Tangled), and Pete (Steamboat Willie). When you play as a villain, you get your own ‘fate’ deck of cards and a player board. Like the base game, each villain has a wonderful 3D symbolic faux-glass player piece.

Each villain has a unique win condition. Cruella de Vil wants to reveal and capture 99 puppies. Pete has four modular mini-goals he needs to achieve on each of his four locations. Mother Gothel needs to earn ten Trust tokens, while keeping her Rapunzel ‘hero’ card away from Corona. Each win condition is asymmetrical and provides a fun-filled back-and-forth between the players.

On your turn, you relocate your villain to a different spot on your player board, taking the action(s) there. Often this involves clever hand management! Your cards are all linked, of course, to the villain’s film. Some are characters, others are items, and so on. Your villain’s win condition revolves around their cards. But, being a perfectly wretched villain, you can attempt to trip your rivals by messing with their fate deck…

Disney Villainous: Perfectly Wretched expansion is yet another wonderful addition to this series. Disney fans will love this… if they don’t mind being the villain of the piece!

Disney Villainous is a 2-6 player competitive game in which you get to play as the bad guy! Working on your own nefarious plot, you’ll aim to complete an objective befitting your choice of Villain. If you’re unfamiliar with Disney Villainous, check out this review by Lauren Campbell!

What’s great about the Disney Villainous Expansions, is they can also be played as standalone games for 2-3 players. You don’t NEED to own the base game, which means one of the expansions can be the perfect way to try the game before committing to the others. However do bear in mind that gameplay can feel much nicer at a higher player count as there’s more opportunity for player interaction. In a 2 player game you’re the sole option for ‘fate’ attacks which can become irksome.

The main appeal of each Villainous expansion is, of course, the new playable Villains…

Perfectly Wretched introduces the wicked crone Mother Gothel of Tangled, the dastardly Pete from Steamboat Willie and the main selling point of the expansion, the murderous, puppy-hating Cruella De Vil from the classic 101 Dalmatians.

The gameplay works exactly as in other Villainous titles, with each villain working towards their own objective to be declared the winner. If you're new to Villainous gameplay check out this How-To-Play.

Essentially as you work towards your own unique goal, you're going to want to slow down your opponents. You'll do so by playing the heroes from their realm to thwart their evil plans. It’s both really enjoyable and entirely infuriating to see these ‘Heroes’ pop up and ruin your strategies.

My recommendation would be to have a really close look at your objective and the cards that will be available to you in your deck BEFORE you shuffle and draw your first hand. For all three of these villains there are certain cards in your deck that are essential to your success, but it can be a pain to get a hold of them if there’s a bad shuffle. You’ve gotta be ready to discard cards in this expansion!

The three Villains in this expansion and their objectives are well suited to each other, but that doesn't mean they're the best Villains out there (at least for me!). Personally I found all three of their objectives more than a little frustrating. A lot of their goals revolved around having the right cards at the right time, and though you could argue that's true of a lot of games, the ease in which you can be set-back in this game felt slightly unfair.

For example, one of Pete's mini-objectives requires him to have 4 items present and one location. Now he only has 4 items in his whole deck, so should other players choose to continually gang up on Pete and have him discard one of those items, he essentially needs to shuffle through his entire deck again in order to try to complete that goal. He has cards that allow him to do that, but it feels pretty tedious.

That being said, this is true of the other Villains objectives. This game definitely requires more strategy and damage control than the base-game, plus I’d recommend setting aside a decent amount of time (a single two player game took us three hours, which for me is a little long for Disney Villainous).

Whilst the iconic Cruella De Vil was the most eagerly anticipated villain in Perfectly Wretched, my favourite of the newcomers was definitely Pete. The nod back to early Disney was great and I thought his deck being black and white cards was a lovely touch.

As with all of the Villains across the Disney Villainous games, the artwork and components are lovely. The cards are high quality and beautifully detailed, the player boards really evoke the realms of our antagonist and the player pieces truly capture the essence of each Villain. They feel like collectables. You want to own them. (At least I do.)

I am really glad I have this game in my collection. I want to have the opportunity to mix up gameplay across expansions, to allow my fellow players to choose ‘their’ villain and to experience the different styles of objectives. As a two player game, I did find this expansion a little frustrating. It felt almost like we were going around in circles, one player taking a set closer to victory, the other knocking them back...that player getting one set closer to victory etc. However, we were evenly matched and it never felt like one player had it harder than the other.

I definitely think this is one to introduce into your collection if you’re a fan of any of the previous Disney Villainous titles. This expansion definitely requires a fair amount of strategy, and could be a great challenge for families, with the adults taking on the more complex roles of Pete and Mother Gothel. Or for players who really like to get their teeth stuck into a role in which they’ll need to be incredibly cunning to win….hey, you are villains after all!

If these three don’t inspire you, why not check out the other expansions, Wicked to the Core or Evil Comes Prepared. Perhaps you’ll find your antihero there!