RRP: £50.99
NOW £37.50
RRP £50.99
Earn 3750 Victory Points
Success! We will let you know when this product is available again.
Your email address has been unsubscribed!
Your email address has been unsubscribed!
Notify me when this product is available to purchase!
This email address is already subscribed to this product!
In Le Havre, a player’s turn consists of two parts: First, distribute newly supplied goods onto the offer spaces; then take an action. As an action, players may choose either to take all goods of one type from an offer space or to use one of the available buildings. Building actions allow players to upgrade goods, sell them or use them to build their own buildings and ships. Build…
Read More
Category Board Games Tags BGG Golden Geek, BGG Top 100, Dice Tower, Golden Pear, Uwe Rosenberg SKU ZEG-MFG3518 Availability Out of stock
Share
Share this
87% 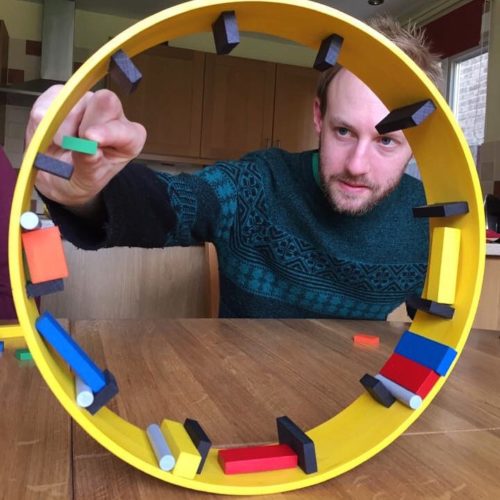 In Le Havre, a player’s turn consists of two parts: First, distribute newly supplied goods onto the offer spaces; then take an action. As an action, players may choose either to take all goods of one type from an offer space or to use one of the available buildings. Building actions allow players to upgrade goods, sell them or use them to build their own buildings and ships. Buildings are both an investment opportunity and a revenue stream, as players must pay an entry fee to use buildings that they do not own. Ships, on the other hand, are primarily used to provide the food that is needed to feed the workers.

After every seven turns, the round ends: players’ cattle and grain may multiply through a Harvest, and players must feed their workers. After a fixed number of rounds, each player may carry out one final action, and then the game ends. Players add the value of their buildings and ships to their cash reserves. The player who has amassed the largest fortune is the winner.

Le Havre: The Inland Port is a two player game, which shares some of the themes and style of Le Havre. This is very much about producing goods and using available buildings in order to amass wealth.

Typically a game will take 30 minutes, so Le Havre: The Inland Port is a lot faster than its bigger cousin. Play is turn-based where players purchase buildings with coins or resources or utilise those buildings which will likely produce resources. After each completed round, more buildings become available and the game continues.

The game utilises a production wheel which is a very interesting and innovative mechanic, though a little hard to explain in a review. Le Havre: The Inland Port is one of those games which is best learned with a test run through with all the components laid out. It’s worth it, Inland Port is a neat and fun game, and as expected from a game by Uwe Rosenberg, is beautifully crafted.

So how does it play?

The short answer is surprisingly well.

Set Up – Each player takes three Franks, a warehouse board and goods as indicated, You also pick up a game board also known as the production wheel.

The game is played over 12 rounds in which players can take a certain number of actions, this number increases in later rounds. Each round is split into three parts:

Beginning Phase – New buildings enter play. There are 31 in total and they enter play in a fixed and set order.

Buildings which are used generate resources in a wide variety of different ways, all of which are well explained in the rules booklet, and as a rule of thumb the more spaces they are away from the production wheel pointer the more they produce. Buildings used in this way are then just like purchased buildings, placed in the sector of the production wheel immediately to the right of the pointer.

To make things even more interesting, it is possible to pay One Frank to use the opponents’ building which again is moved to next to the pointer. Yes, I know this may sound a bit confusing, it’s hard to explain, but it is a really neat mechanic and is actually easy to grasp with the components laid out. These buildings have various effects, mostly they generate more Franks or increase the quantity of goods in the warehouse.

Play then moves to the next Beginning Phase and new buildings become available. After the 12 rounds are completed the game is over. Victory is determined by wealth. Buildings are worth Franks, some buildings are worth more than others and those coming out in later phases are often worth more.

Resources might be worth Franks – it depends on having the right building, which is very much part of the strategy within Inland Port. Plus any Franks in hand are counted. The winner is the player who has amassed the most Franks.

All the components within Le Havre: The Inland Port are of good quality. The boards are on solid stock and well printed. The buildings and counters are equally solid. The rulebook is well laid out and has good examples of play.  Ultimately it’s a high production standard Euro game on par with its bigger cousin.

Play takes around 30 minutes, so Le Havre: The Inland Port is a pretty quick game. The mechanics (though hard to explain) are easy to pick up and are extremely elegant. The game would benefit from some sort of counter to aid recording the number of actions taken in the main phase but this is not a deal breaker.

If I have a concern it is that nothing is left to chance, everything is visible, there are no random factors. I worry that this might produce a sameness of each play, especially between the same two players as they potentially hit on an effective formula.

This being said, because it is possible to use buildings belonging to an opponent I suspect fixed patterns will not quickly emerge, and it is entirely possible that one good strategy is to let the opponent purchase the building and to time this to be able to operate it and deny the opponent those resources. There is a lot going on, and a lot of possible options and things to do each turn, whilst not being so complicated that it becomes hard to make decisions.

If you like Le Havre, which is a good multiplayer game, and want a two player game with the same themes then Inland Port is certainly one to consider.  As would be expected from any game designed by Uwe Rosenberg, it's finely crafted, well balanced, has a degree of challenge, and is fun.

The Good
Innovative goods production wheel.
Fairly easy to learn.
Play is fast. The Bad
The absence of a chance factor may make the game feel static and limit replay-ability.