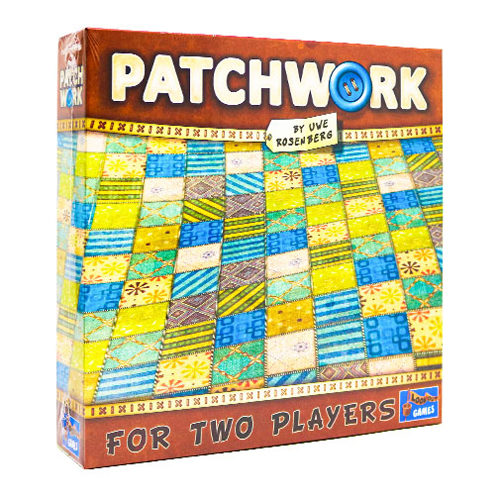 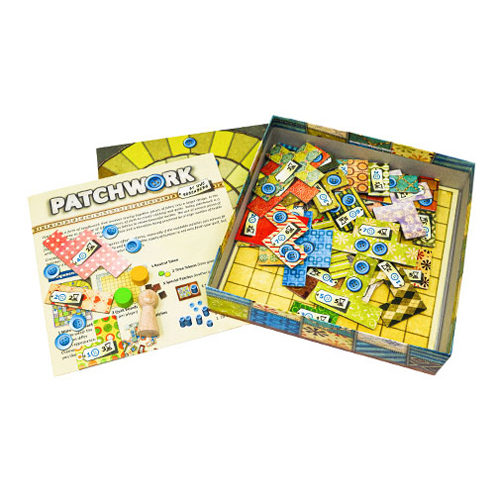 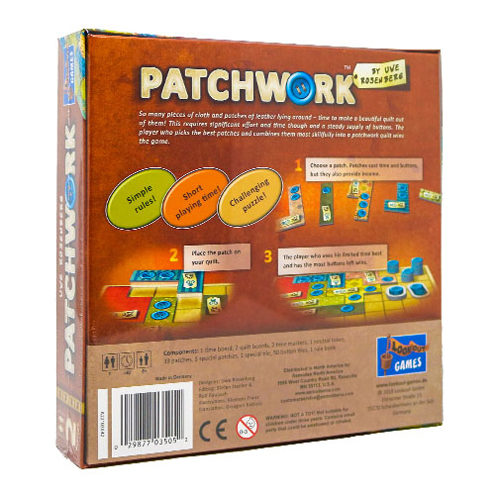 Add to Wishlist
Patchwork is a well-loved two-player tile-laying game from acclaimed German designer Uwe Rosenberg. This tight puzzle of a game has been admired by players around the world since its release in 2014 and remains one of the most popular two-player titles. As its name suggests, Patchwork pits two players against each other in a contest to see who will create the most complete, aestheti…
Read More
Category Board Games Tags Best Sellers, BGG Golden Geek, BGG Top 100, Dice Tower, Golden Pear, Great For Two, Great Gifts, Mayfair Games, Patchwork, Platinum, Uwe Rosenberg, Value For Money SKU ZBG-MFG3505 Availability 5+ in stock
Share this
92%

Patchwork is a beloved tile-laying game for 2 players from acclaimed German designer Uwe Rosenberg. This tight puzzle of a game has been admired by players around the world since its release in 2014 and remains one of the most popular two-player titles on the market.

As its name suggests, Patchwork pits two players against each other in a contest to create the most complete, aesthetically pleasing patchwork quilt. The pieces of this quilt are represented by tiles of different shapes and sizes, which start the game randomly arranged in a circle.

Players then take tiles according to a clever mechanism. They can choose a tile up to three spaces clockwise from the spool (a marker on the edge of the circle). They pay the cost in buttons (the game’s currency) of whatever piece they choose and move their pawn a number of spaces on the time track equal to the value on the tile. Players continue to take pieces until their time pawn fully overtakes the other player’s pawn. If you don’t want to pick a piece, you can pass instead, moving your pawn ahead of the other player’s and taking a number of buttons equal to the number of spots you moved.

You can place the tile that you take anywhere on your 9x9 grid, but you’ll probably want to keep them closer together so that it’s easier to see what spaces you still need to fill. At certain points on the time track, you’ll also unlock 1x1 tiles to help you plug little gaps and receive button income based on the value of the tiles that you’ve placed. Buttons convert into points, but you’ll also lose two points per empty spot on your board, so be careful not to leave gaps!

Uwe Rosenberg’s clever game of Patchwork will have you and your opponent scratching your heads and staring at your tiles as you try to work out how to get the better of each other. Order today to get this two-player classic delivered.

Patchwork is a fairly light two player game by Uwe Rosenberg in which players compete to place oddly shaped patchwork pieces to form a growing quilt on a personal nine by nine quilt board. Each patchwork piece comes at a cost in buttons and in time which the player must pay.

As time progresses with each play of a patchwork piece, the player may earn more buttons or small bonus single patchwork pieces. The game ends when the player tokens reach the end of the time track, with unspent buttons counting as victory points. Patchwork has a “tetris” feel, is quick to learn, plays in around 30 minutes and although simple to play is surprisingly tactical.

I’d known about Patchwork for some time, knew it has good ratings, I thought that perhaps the theme might not be to my taste, or that it would be too simplistic. I must say that upon playing Patchwork I was very pleasantly surprised.

It’s all about the buttons (or is it)

Buttons are currency and they are needed to purchase pieces.  The larger, more desirable patchwork pieces cost more. As the game progresses there are opportunities to earn more buttons. Buttons are not only currency, they are also victory points.  So, what we have here is an economy, but there is a further factor - time.

Time is limited, with each purchased piece time progresses and can never be reclaimed. Run out of time and it's game over, which means with every piece bought two factors need to be considered.

Firstly, how it aids the button economy, and secondly is it worth the time? Finally bear in mind that there is a competitor who will be making the same decisions and will be manipulating time in order to get the best pieces and create a superior economy. It’s cutthroat. 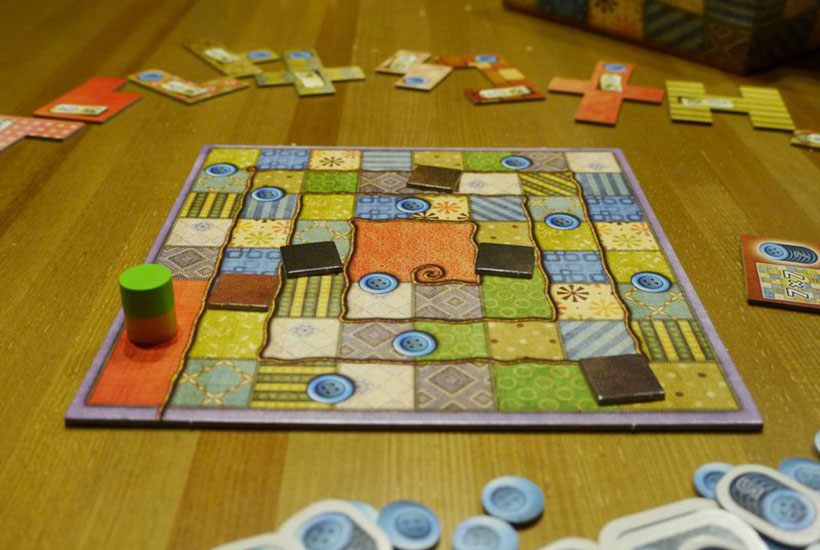 Each player starts with an empty nine by nine quilt board and five buttons.  The various patchwork pieces are placed randomly in a circle around the time track board with each player placing their time token at the start of the time track.  A neutral token is placed within the circle of pieces next to a designated patchwork piece.

There is one further restriction; it is only possible to purchase one of the first three pieces in a clockwise direction from the neutral token, with the token then moving to the replace the piece purchased. Manipulation of how this neutral token moves and the patchwork pieces which become available is a key component of strategy. As the time token moves forward on the time track one of two other things can happen.

Firstly as the token moves onto or over a button space the player receives income corresponding to the number of buttons on the tiles on their board. Secondly the player owning the first token to move onto or over a single square patchwork piece may claim that piece for free and play it.  One other rule with the time track is that turn order is determined by who is last on the time track, so it is entirely possible to have two or more consecutive turns.

Play continues until each player has run out of time, at which point the winner is determined. Each player gets one point for each unspent button.  Each player loses two points for each uncovered square on their board; there is also a points bonus for the first player to form a fully filled seven by seven square.

Patchwork is a little gem. There are three things happening; building the button economy, managing time and the consequences of time, and manipulating which patchwork pieces are available. It is not really about the patchwork pieces or making a quilt, it is about managing an economy in a time efficient manner and competing to do so against an opponent.

That the Patchwork pieces are laid out in random order introduces a random element and ensures no two plays are going to be identical. Patchwork is simple, easy to pick up, elegant, fast and cutthroat.