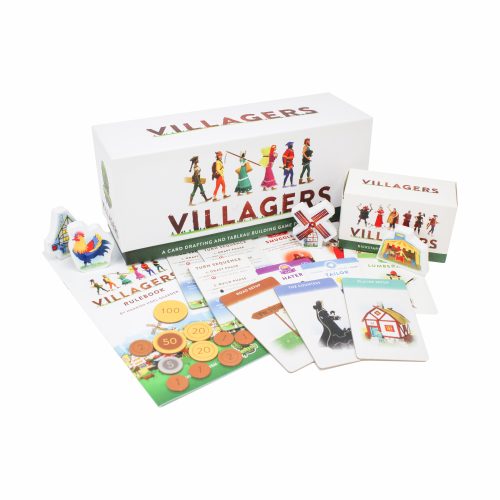 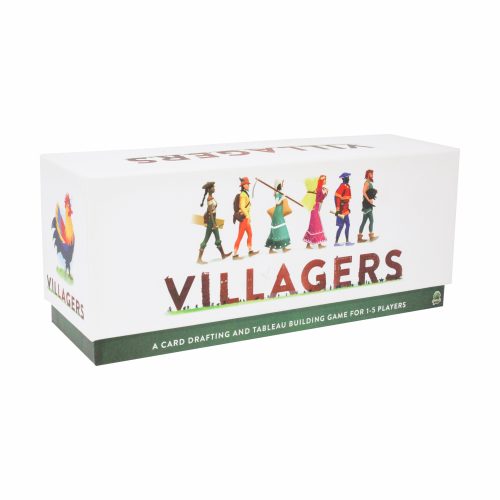 Games often grab your attention with their looks, be this the actual artwork or graphic design. We might not be bird watchers, but we can appreciate how good the art is in Wingspan. Villagers is a game that created an incredible amount of hype and had an incredible run on Kickstarter. It didn’t hurt that designer Haakon Gaarder also created some excellent character art and graphic…
Read More
Category Board Games Tags Sinister Fish Games, Villagers SKU ZBG-SIF00030 Availability 3+ in stock
Share
Share this
75%

Games often grab your attention with their looks, be this the actual artwork or graphic design. We might not be bird watchers, but we can appreciate how good the art is in Wingspan. Villagers is a game that created an incredible amount of hype and had an incredible run on Kickstarter. It didn’t hurt that designer Haakon Gaarder also created some excellent character art and graphic design on a stark white background.

Thankfully, Villagers has the gameplay chops to back up the great look. Like Wingspan some of the hype surrounding the game may have given the impression that it is more complex than in reality, but in the case of Villagers there is more than enough depth here. The game is a card drafting and engine/tableau building game where you are trying to rebuild after a plague. Cards representing refugees are placed in a central row called ‘The Road’ each round you will draft as many of these potential villagers as you can feed (indicated through clear iconography, with a maximum of five). Then you will build your village.

Building requires you to have enough building icons (again a minimum of two and max of five) and sometimes to unlock cards. If you have the unlocking card they will earn money from the bank, if another player has the unlocking card you will have to pay that card, otherwise you pay the bank. This is a key factor as if you snag a blacksmith early, that card can earn a lot of money and money wins the game.

To help make sure no-one gets left behind there are ‘basic’ cards that are pretty much always available and can be built ignoring the restriction. These cards are often the founding card of villagers cool ‘stacks’. Each card will be part of a chain or sequence. There are often multiple ways to chain these stacks, but you always must do so in the right order. This may sound confusing, but it is all laid out clearly on the cards.

Villagers is a great card game with a lot of content in the box. The game is easy to play but does need some decision making. The drafting and tableau building work really well and it’s easy to see why the game got so much hype.

Villagers is a card-drafting, tableau-building game for 2-5 players. You play as the founders of a new village during the middle-ages. Over the course of the game you will be selecting new villagers to join you. You'll be building upon the skills of those currently in your village to make sure you’re increasingly prosperous as the game progresses.

You’ll start the game with a hand of five random villagers from the deck, these will come from a variety of professions which are categorised by the types of materials they use; for example you’ll have ‘ore’ villagers, ‘wood’ villagers, ‘hay’ villagers, and so on…

The game will also begin with the ‘road’ which is a row of six villager cards in the middle of the table, and 6 stacks of cards which will work as the timer for the game. Each stack contains a number of villager cards equal to twice the number of players, and whenever a card is taken from the road, it is replaced with the top card in the left-most stack.

Each round of villagers consists of a draft phase, and a build phase. During the draft phase players will take turns selecting villagers from the road until they have taken two. Plus an extra one for each food symbol they have. During the build phase players may play two villagers from their hand, plus an additional one for each house symbol they have. After the second of the six stacks is depleted there will be a first scoring phase. After all six stacks are gone there’ll be final scoring and whoever has the most gold wins. The powers villagers have can largely be split into four types. Cards which provide gold (points) in both of the scoring rounds. Cards which provide gold in the final scoring round. Aswell as cards which give you food or house symbols. And, finally,  ‘special’ villagers which have a variety of different effects.

One of the strongest points of this game is that is plays relatively quickly, with most games running at around 30-45 minutes, and you’re constantly engaged during that time. The turns are lightning fast, and there’s always good cards you’ll want to draft. Importantly, you’ll really feel like you’re achieving something during the rounds of this game, as you build up your chains towards your strongest villagers, and expand your tableau to include a wide-range of gold-collecting powers. And as there are only two scoring rounds in the game, it’s over fairly quickly but still feels like the game has reached its natural conclusion.

As this is mostly a game about building out your personal village, player interaction in this game is fairly low. There are two main ways in which players in the game interact. Through the common set of cards you’re drafting from. Or through some card which have ‘padlocks’ which may require you to give money to other players in order to play them. If you like games in which you’re mostly working on your own little area and there’s nothing that your opponents can do to mess that up, then this game is definitely going to appeal to you.

Out of the box there isn’t a huge amount of replayability. After a few games you’ll have likely seen all of the villagers which the game has to offer. That’s not necessarily as bad as it sounds though.  In Villagers, having familiarity with the cards makes it much easier to discern which strategies you want to employ. Of which there are several which all seem very well-balanced. Also, I’ve brought this to the table many times since I purchased it. I’ve enjoyed each game as much as the last. Since this a card game with a relatively low cost, you should definitely get a good number of plays for your money.

Another great aspect of this game is the cards themselves. The artwork is very clean and colourful, with a charming simplicity to the villagers. Perhaps more importantly, the graphic design is perfect. It’s very clear what each card does and which rules relate to it. This helps keep the gameplay nice and smooth, especially for teaching. The game also comes with cardboard coins to keep track of your gold scoring and some nice separators. All in a compact box.

Villagers really feels like it does something different from all the other cards games I’ve played. Its strongest points are that it’s fast, engaging, and looks great; which are three things I’m always looking for in a card game. It’s also easy enough that it can be played by less experienced gamers. However it still has some interesting decisions about which cards to draft and play. As a bonus, it also scales really well from 2 to 5 players. This is particularly due to the extra professions types you add into the deck for 4 or 5, although I think I like it best at 3 players. If you’re after a new, affordable, strategic card game then I definitely recommend this one.