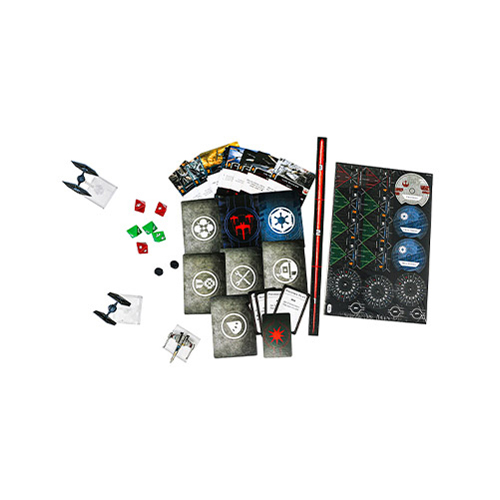 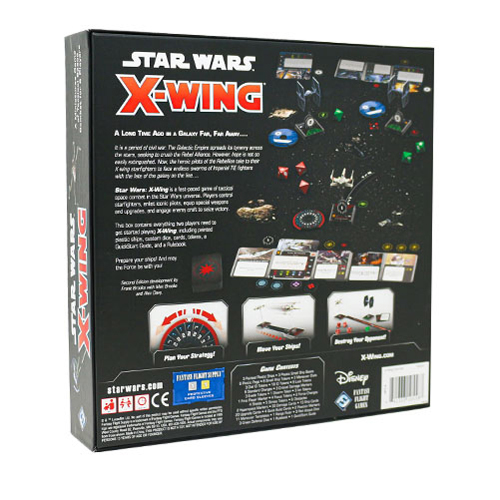 you could earn 3279 victory points

you could earn 3279 victory points

Star Wars X-Wing Second Edition follows in the footsteps of its predecessor, the second edition takes everything the first edition did well and refines it, creating a more fluid gameplay experience! Take control of your very own galactic squadron as you take to the stars and take on your opponents in inter-galactic battles, playing with your favourite starships! During a one of thes…
Read More
Category Miniatures Tags Fantasy Flight Games, Galactic Empire, Podcast Approved, Rebel Alliance, Star Wars, Star Wars: X-Wing SKU ZBG-FFGSWZ01 Availability 3+ in stock
Share
Share this
85%

Star Wars X-Wing Second Edition follows in the footsteps of its predecessor, the second edition takes everything the first edition did well and refines it, creating a more fluid gameplay experience! Take control of your very own galactic squadron as you take to the stars and take on your opponents in inter-galactic battles, playing with your favourite starships! During a one of these starship dogfights, [layers will utilise unique abilities, all to give them an advantage while engaging in fierce combat. Every ship is different, each with its own set of cards, detailing manoeuvres ranging from gentle banking turns to aggressive Koiogran turns. Each round will begin with a player selecting (in secret) a manoeuvre from each of their ships specialised dials. As soon as this decision has been made, the ships take slight and you will both begin moving the ships, weaving throughout the galactic battlefield, using your manoeuvres to gain the advantage over your opponent. With its intuitive mechanics and refined gameplay, the second edition really brings a great gameplay experience to both beginners and veterans of X-Wing. With the Core set, you will receive two TIE fighters along with one T-65 X-Wing miniature, all with their own manoeuvre templates, dials, cards and dice. The miniatures are all beautifully pre-painted, meaning there is no need for long hours to be spent painting each intricate model, a big draw for people just starting out! Remember, the Core Set is just the beginning of the X-Wing universe! There are numerous expansions to enrich your experience and extend the gameplay, while also allowing players to build up a full hangar bay’s worth of ships, ready for battle! Player Count: 2 Time: 30-45 Minutes Age: 14+

We start this review?

Why, with an opening crawl of course!

So, let’s get down to the nitty-gritty and not ponder over what has been, I’d rather we chat about what we have now. And if like myself and multitudes of others you fell in love X-Wing First Edition, believe me when I tell that you are about to do the same all over again; and if this is your first journey to a galaxy far far away via some bits of plastic and a collection of cardboard, well the same applies to you. Oh, but that means it's actually the first time for you guys then, right?

Anyways, before we get down to the basic mechanics of the game for those of you who have never played before, lets first have a quick chat, for the benefit of X-Wing veterans, about why Fantasy Flight Games (FFG) felt it was time to reboot Star Wars X-Wing, and, what the changes will mean for you as X-wing vets.

What it boils down to is this (according to Andrew Navarro, head of studio for FFG) the design space for which the base game was designed was starting to break under the weight of the mechanical complexities, which became apparent once they started to add more and more ships and expansions. Which meant that for each new ship they added, it just felt like that they were just bolted on to the core experience with a vast amount of text and explanation to try to make each ship feel unique.

But all this did was to add more and more weight onto the original core experience so that it began to suffocate under the weight of all the extra mechanics and so became not so much fun. Whew!

And now to give the veterans a wee taste of what to expect in the new game, in no particular order:

This gives specific characters, those who have the force, and have a force rating represented on their card in purple. These characters are given force points to spend, which essentially boils down to having the ability to manipulate the outcome of either an attack or evade roll. Like a mini focus token if you will. And guess what? You can regenerate one token at the end of every round. Some characters can regenerate at other times.

This enables the designers to have the ability to tweak points costs live so as to keep new and old ships balanced and gives the game further longevity.

Some pilots now have an icon in their action bar which is represented by first a white Focus symbol with a small white arrow pointing to a red barrel roll icon. Which is essentially giving some ships which may have been lacking in abilities a mini push the limit ability. So, I lied, push the limit is kind of still in there!

In the First Edition some ships, for example the Millennium Falcon, had the ability to have no restriction of firing arc. This was a nightmare if you were ever up against at ship like this! And made the whole manoeuvring side of the game redundant. Now, you have to plan ahead as to which quadrant or quadrants you wish to aim at by using an action. Thank goodness! Oh, there’s a cool new cardboard indicator that goes on the base of your ship! Enjoy!

Upgrade to ships base design - Bullseye Arc! Zone indicators on the base! Icons!

Well that’s all kind of self-explanatory. The bullseye arc, not every ship has this ability, but many upgrade cards give you this ability. ‘Crackshot’ for example, allows you, if you are attacking and they are in your bullseye arc, to cancel an evade roll by the defender.

However, it been slightly curtailed and is less of dramatic leap, especially on large based ships. The use of a middle line down the centre of the ‘1’ templates is used and although It does lessen the distance when rolling with small based ships, it does however balance the game more. When using for medium ships you turn the ‘1’ template on its side.

So, when using say torpedoes as one of your upgrade cards in the past, they were a one-shot deal and incredibly powerful. But once used the card was goosed! Now, although it may now be as powerful, you can now recharge your missiles and reuse depending on how many recharges it has Huzzah! Same goes for R2D2, recharge that droid!

Good news, all your old ships are can be used, all you'll need is an upgrade pack for your choice of Faction, Rebel etc.

One last titbit for the vets – S-Foils open and close!

That could actually be for vets and newbies! It’s really cool! Yup on certain models, the wings can open and close and will effect your attack value and manoeuvrability, depending on if they are open or closed.

Well, I reckon there’s enough in there to whet the appetite of most veterans. And to be honest, there is loads more cool stuff that’s been tweaked but I just don’t have room on here to tell you everything. So, let’s give the new players a wee taste of what’s in a game of X-Wing.

First off, you are going to love this game, but don’t let me cloud your judgement, get out there and try it for yourselves. X-Wing is played over a series of rounds and as a new player it is advisable to play the quick start rules then move on to the advanced stuff once you’ve mastered the simple stuff. What follows is a brief breakdown of a full player’s turn.

You have two players and they decide which faction they will be. If you have the basic core set that’s either Rebels or Empire. Mark out a game area on a table or floor which is 3X3 Foot and choose a side to play on. There are cool cardboard obstacles like asteroids which are in the box set and can be placed for added fun.

The player who has the lowest squad point chooses who goes first, otherwise randomly choose who goes first. Now start playing. And may the Force be with you.....

So, there you have it folks, X-wing in a nutshell. And to be fair I really have skimmed over the surface of the rules like a T-65 over the surface of the Death Star! There really is so much more to this game of out-thinking and out-manoeuvring than my condensed introduction   can ever hope to explain. Suffice to say that if, as a young boy or girl, you longed to join Luke or Han up in the stars dog fighting the enemy and had a yearning to leap into the cockpit of a Y-Wing, or and X-wing or maybe even a Tie Fighter, I know for a fact that once you have your first taste of Star Wars  X-wing, you will feel yourself transported back to that time, I know I was.

And now that I’ve used Jedi mind tricks on you. It's time for me to go over the Dark side and the Light side of the force....

Cons first, just so we can finish on the good stuff. The main thing for me which will turn off a lot of players especially seasoned players who, like me, bought four of every ship as it came out on sale, is the cash outlay for more ships or even the Upgrade packs which, to be fair, aren't that pricey considering, but it is still an outlay that could have been put to say a new faction, like The First Order. Also, there will be those that may have a problem with the game having to rely on an app for the points costs and upgrades.

And finally, the Pros, well again there is just so much I can put down here most of which I’ve already mentioned. I feel X-Wing Second Edition is far superior to the original mainly because of the balancing issues between the older ships and the newer ones, this is now no longer the case. Another bonus is in the older version you had to buy all the factions to try to get the upgrade cards you wanted so if you well collecting just Rebels you found yourself dipping into Empire ships for a specific card. This is now no longer the case, all cards relevant to say Rebels will now be released in Rebel only expansions! Huzzah!

Well that’s enough from yours truly, it’s time for me to get back in the cockpit and blast off to a desolate monster-infested planet known as my place of work, and try to learn the ways of the Force. I wonder if my Jedi mind tricks will work on my boss? ‘These aren’t the reports you’re looking for....’ ‘You don’t need to see my sick line....’