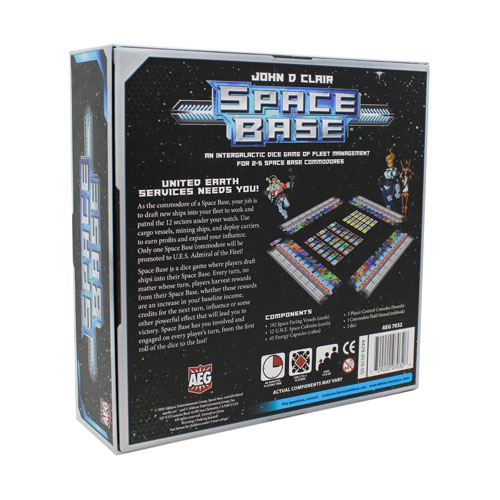 you could earn 3049 victory points

you could earn 3049 victory points

When I first started seriously playing modern board games a game called Machi Koro was very popular. I still have a soft spot for it even though I have probably moved on from the gameplay itself. What has helped is games like Valeria: Card Kingdoms and Space Base moving the genre on, while retaining that addictive draw of rolling dice and activating cards. Space Base’s basics are …
Read More
Category Board Games Tags Alderac Entertainment Group, Golden Pear, Great For Two, John D. Clair SKU ZBG-AEG7032 Availability 3+ in stock
Share
Share this
87%

When I first started seriously playing modern board games a game called Machi Koro was very popular. I still have a soft spot for it even though I have probably moved on from the gameplay itself. What has helped is games like Valeria: Card Kingdoms and Space Base moving the genre on, while retaining that addictive draw of rolling dice and activating cards.

Space Base’s basics are very simple. Over the course of the game you gather cards that have a number on them, on your turn you will roll two dice and activate cards matching both the die numbers or the sum of them. You will want to create an engine, of sorts, that gives you the maximum benefit at the best odds.

The beauty of Space base is that when you buy new cards you turn your old ones upside down and tuck them in under the board with the bottom showing - this becomes a power which can be activated on other players' dice rolls. This creates some tough decisions where you will want to get cards on to their upside down side as soon as possible to benefit from them - especially as you can stack those cards for multiple effects.

On top of this, you are trying to increase your income each turn so you have more to spend in future turns. Space Base gives extra options over Machi Koro that make it a much more attractive game for me. It manages to be avoid the frustration of bad dice rolls and rewards strategic play. Amusingly there is even a card that wins you the game - should you be able to achieve its difficult requirements.

Space Base is easy and quick to play but deep and rewarding enough for repeated plays. It has a relatively compact box for the amount of game you get and the publisher are supporting the game with future expansions, including a legacy style one.

The year of 2018 has been generous to board gamers, consistently pumping out triple-A titles from mainstream publishers and Kickstarter alike. Our warped shelving units are now cramped with enormous boxes packed to bursting point with intricate miniatures, engrossing thematic worlds and artwork that puts Van Gogh to shame (well sort of).

Yet, nestled into a cosy corner lies a modest little box which continues to prove that bigger does not necessarily mean better. Should you accept the job of Space Admiral, done your spacesuit and build your space empire? Or should you remove it from your shelf and make some...space (sorry, I had to).

You know it's all about that base

Space Base, published by AEG,  is a delightfully simple game, first person to 40 victory points wins! Each player takes a board with twelve slots and places the appropriate ship on the allocated spaces.

On a turn, you will perform two actions; roll the dice and collect the reward(s) and/or buy a card. Whoa now! Before you say anything! No, Space Base is not as random as the rules would have you believe, because you may choose how the dice are allocated. You can either choose to allocate the dice individually and activate two lesser cards, or keep them as a whole and gain the reward from a single, more powerful card.

For example, you rolled a four and a five, hurray! Good for you! Now, you can activate either cards four and five gaining both blue rewards, or choose to keep the nine and acquire more valuable resources. These rewards usually range from gaining credits, building economy or obtaining those elusive victory points.

So, now you have a lovely pile of cash burning a hole in your spacesuit...oh wait that's not good. You'd better buy a card from the three-tiered market to add to your empire. However, when you buy a card you spend ALL your credits! You wince and endure as your yellow cube will painfully slide back to the position of your economy track (green cube), regardless of the cost of the card. If you have invested in economy then great! If not, well you probably should.

Once you have purchased a new ship, it must replace one of your current ships in the allocated slot. But do not fear, your replaced ship isn't decommissioned yet! You flip the ship over and slide it seductively under your player board.

Now this is where the game is. When another player rolls their dice, you can greedily grab the red rewards from your flipped ships; allocating the dice the same way you would on your turn! So, Space Base immediately presents players with a simple choice; do you spread your empire out across all twelve spaces and constantly gain rewards, or do you monopolise in a couple of slots and tailor your engine to activate these slots as much as possible.

The Elephant in the Room!

'Now wait just one finger-licking minute there laddie!' seasoned gamers will shout as they peer over to their cardboard laden Kallax. 'Why would I buy this when I own Machi Koro!'. Yes, the similarities between Space Base and the charming dice game Machi Koro are somewhat shocking. However, you can forget about Machi Koro. Space Base straight-up blows it out of the solar system with a laser mounted canon to the face. BOOM!

Unlike Machi Koro, gaining rewards from someone else's turn on every roll immediately eliminates all downtime and keeps players constantly engaged. Dissimilar to many games, you may have one or two dead turns at the beginning of the game, but it does not continue throughout. It's astonishing that this mechanic has not been introduced and streamlined sooner in other games. Relying on dice to create a sense of randomness is widely shunned, but Space Base is an ambassador for how this can be achieved successfully.

Space Base is like a slot machine that you design and rig; you can line it with reward cards or cards that have special powers that enable you to manipulate dice rolls, choose powers next to others or take actions multiple times. Synergizing cards is fantastic and the sense of intergalactic freedom this delivers is out of this world (again, sorry). Minimising the randomness in the game exponentially increases the control you hold over your own engine, which gives you a great sense of gratification when a plan finally comes together.

Even so, it does suffer from a minor pacing issue. Whilst the beginning can be a little slow as you build your tableau, the end game can swing around and smack you in the face before you could say 'why am I being hit in the face by a metaphorical swing!?' You can purchase cards which grant immediate victory points, but completely block a slot on your board.

Once a player generates an efficient enough engine, they will snatch at these until there is nothing left for anyone else. Exponentially increasing the speed of the game is an interesting design choice, which many people will struggle with on their first play-through. Yet, once gamers realise this, it suddenly creates and unbelievably tense sprint finish.

Space can be a Beautiful Place

From a distance, Space Base is a swirling supernova (fourth pun) of colour, which, combined with the sizeable footprint it leaves on the table, makes for an eye-catching affair. People won't fail to spot the (borderline) glow-in-the-dark expanse you appear to be navigating and will peer over your shoulder as their curiosity takes hold. Yet, examine cards under the microscope and the cracks being to show.

Many ships are simply copied and pasted with a different colour, the names of the ships are dull and the artwork itself looks as if it belongs on a smartphone app. On top of this, the iconography for some of the abilities is incredibly ambiguous. This wouldn't necessarily be a problem, except the rule book does a poor job of explaining – and sometimes leaving out altogether – what the different cards mean. Dig a little deeper and you realise that even the box art and name are horrifically tedious and bland – 'Space Base'.

Attempt to entice others with a name like Space Base and you will be greeted with a sea of ambivalently sceptical groans. All this aside, the foldable players boards, acrylic cubes and sparkling dice are all of a high standard, including the well-designed insert.

I love Euro games. The thrill of engaging in intellectual combat with a group of players all vying to prove they can master strategy and mechanics quicker than their opponents is a pastime that brings me great satisfaction. Bending my mind so horrifically, you can find me in a corner adopting the foetal position sometime after the game has finished. Nonetheless, every now and then, it's great to play something that doesn't cause permanent emotional damage.

Space Base is, and I don't use this word often, fun. It delights in both colour and mechanisms which, while simple, offer big choices without the awkwardness of analysis paralysis. It sits proudly on my shelf, waiting for those magic four words – Let's play something light.

Closing Thoughts on Space Base

Space Base is THE best 'throw dice, get stuff' game on the market. Combining streamlined mechanics and perpetually gaining rewards is a great experience for all ages and player counts. The minimal downtime and quick decision making give it a thrilling sense of pace that can be enjoyed by gamers and non-gamers alike.

Yes, it does have it's inconsistencies with it's graphical and design aesthetic, but if you have room on your shelf, you should consider adding Space Base to your collection today.