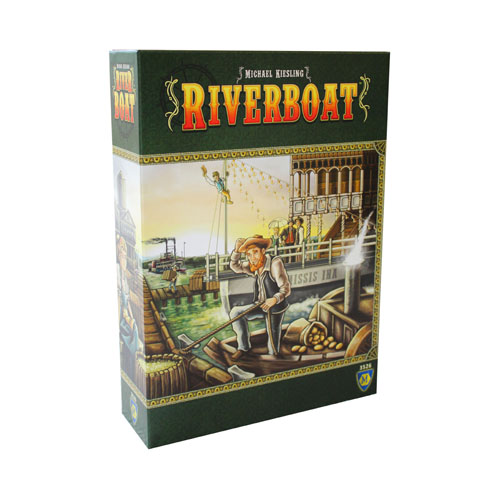 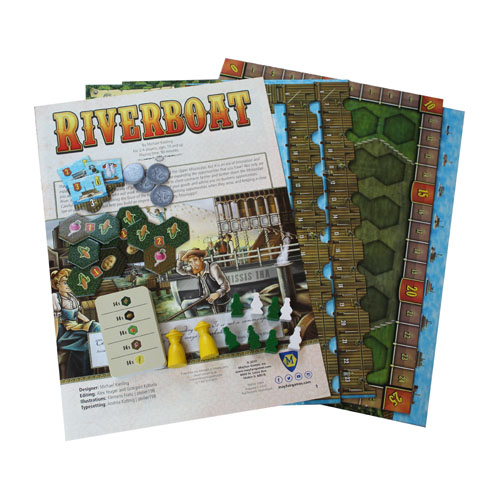 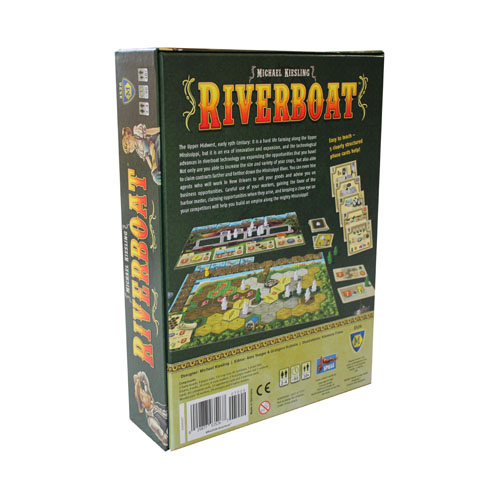 Add to Wishlist
Riverboat posits each player as the owner of a 19th century farm on the bank of the Mississippi River. You need to organize your workers to ensure that the fields are ordered according to their type and harvested when ready so that the goods can be shipped to New Orleans. In more detail, the game lasts four rounds, and at the start of each round players draft phase cards until they&…
Read More
Category Board Games Tags Gold, Mayfair Games, Michael Kiesling, Riverboat SKU ZBG-MFG3526 Availability Out of stock
Share this
80%

Riverboat posits each player as the owner of a 19th century farm on the bank of the Mississippi River. You need to organize your workers to ensure that the fields are ordered according to their type and harvested when ready so that the goods can be shipped to New Orleans.

In more detail, the game lasts four rounds, and at the start of each round players draft phase cards until they're all distributed. The phases then take place in numerical order, with the player who chose a phase being the first one to act. In the first phase, players place their workers in the fields, with each player having the same distribution of colored field tiles, but a different random placement for each player. In phase two, players organize their crops, trying to group like types together, with some fields requiring two or three workers. In phase three, players harvest crops and load riverboats, with a dock needing to be filled with all the goods of a single type before it can be loaded. In phase four, the boats are launched and players can take special actions, with additional victory points possibly coming in phase five.

There were four games released in 2017 with Michael Kiesling’s name on the box. One of these did not have a general UK release (Reworld). Of the other three, many people have a copy of Azul. Many people have played, or at the very least heard of, Heaven and Ale. Both of these games became high profile thanks to the Spiel des Jahres Award and Kennerspiel des Jahres nominations in 2018 respectively. The last of the four games, Riverboat, was nominated for the Meeple’s Choice 2017 award, but in a field of almost 30 games (which also included Azul and Heaven and Ale) this drew little attention. It’s a real shame that Riverboat didn’t receive more acclaim, as it definitely deserves more recognition.

At its heart, Riverboat is a farming game - crops are selected, planted, harvested and then shipped down the Mississippi. However, as with many Euro games, the theme is fairly superficial, and, to be honest, I’m not sure what theme might fit over the mechanics of Riverboat - I think it's better to let the gameplay speak for itself.

Riverboat plays over four rounds, with each round having the same five phases - Cultivation, Planting, Harvesting and Shipping, Opportunity and Scoring. Players start the game with 13 workers available - this supply is likely to deplete through the course of the game, so it is important to manage the number of available workers through the rounds.

Players place eight workers in their fields (a grid of hexes on their player board). A deck of cards is flipped to reveal a colour of field, and players select one field of the matching colour on their personal board in which to place a worker. This is repeated a further seven times. This represents the workers preparing the fields for planting.

Drawing from a random selection, players choose a tile to place under the feet of the workers placed in the first phase. The tiles are made up of one, two or three hexes - and each has one or two crops. Tiles can only be placed where there are workers, therefore careful placement of workers in the first phase can make this phase easier. Larger tiles carry bonus victory points, but can be more limiting in terms of available crops, so should be chosen judiciously. This is repeated until all workers are standing on a crop tile.

In turn, players select workers from matching crops to harvest the tiles. Then the harvested crops are shipped - the selected workers are removed from the board (and returned to the player’s supply), and a riverboat tile is taken from the available selection (and so, finally, the riverboats appear in the third phase). Each boat is numbered - players may select a boat with a number up to the quantity of workers removed.

Each tile awards one or two bonuses, with more powerful bonuses on higher numbered riverboats. The riverboat tile is positioned, left to right, along the harbour side of their board (more about this later). This action is carried out twice, therefore, it is prudent to try to ensure that crops planted in the second phase are mostly from the same crop type. The more workers there are on one crop, the more workers may be removed, and thus be available in future rounds. Workers in un-harvested fields remain on the board until the next round.

Thematically, this is the most abstract phase,as players select a scoring card from a random selection of four. These cards are not scored immediately, however, as this happens in the next phase.

During this phase, players may send out up to two surveyor meeples to score cards (chosen in the opportunity phase) or features on their board. Cards or features are scored immediately, which can lead to some challenging decisions - score early, when the point yield may be lower, or wait until the features will score more, but run the risk that not all features will be scored. After all, a maximum of two surveyors are placed each round. However, players start with only two surveyors and, although more can be earned through the game (such as from Riverboat bonuses), that may be at the expense of earning other scoring features.

There are two main types of scoring features in the game - barns and wells. Wells are placed onto a crop hex of an already harvested field and score one point for each contiguous crop hex of the same type when a surveyor is placed in the well (not the most careful of surveyors!). Barns are placed on an empty hex (i.e. one which has not been planted. When a surveyor visits a barn, players are awarded two points for each hex of a single type adjacent to the barn.

The Harbor and the Harbormaster

At the end of Riverboat, the total of the numbers on the boats which the harbormaster has reached will be awarded as victory points - but only to the player whose harbormaster has made the most progress. Other players will receive half of the summed values. Choosing to progress the harbormaster instead of receiving other scoring features is yet another tough decision to be made in Riverboat.

Four rounds doesn’t sound like many - it sounds like Riverboat might be a game in which you are left wanting “just one more round." However, there are a number of elements of the game which bring it to a natural close, such as all of the spots on the harbour being filled, and large numbers of the hexes on the player boards being filled.

There are many elements of the game which need to be managed carefully - the number of available workers, the variety of crops which are available to be harvested, the number of fields of a given type which are harvested at once (considering the riverboat tile bonuses). All of these mean that there are some planning decisions to be made, but the beauty of Riverboat is that the game gently takes you by the hand and leads you through the consequences of those decisions through the course of the rounds.

This doesn’t mean that the game feel like it plays “on rails” - on the contrary, it still feels like there is a broad decision space. Also, the depth of the decision is not compromised; instead, all players action the same decisions at the same time, making it easy to keep an eye on the progress of others’ boards, and gauge how likely you are to clash over available tiles.

Comparisons to Heaven and Ale are inevitable - both games have hex boards, score intermittently through the game based on adjacency, and score according to tiles of crops of the same type. Note, however, that the end game scoring of Riverboat is substantially more transparent.