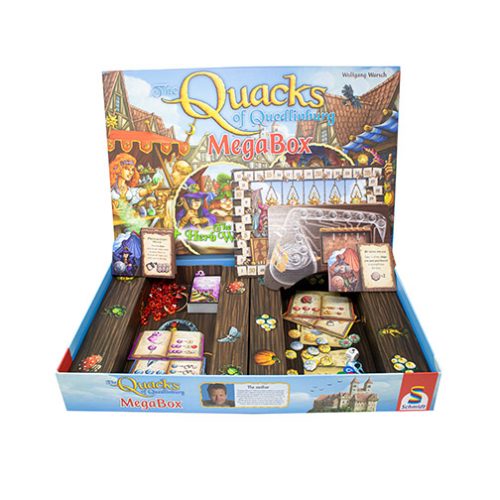 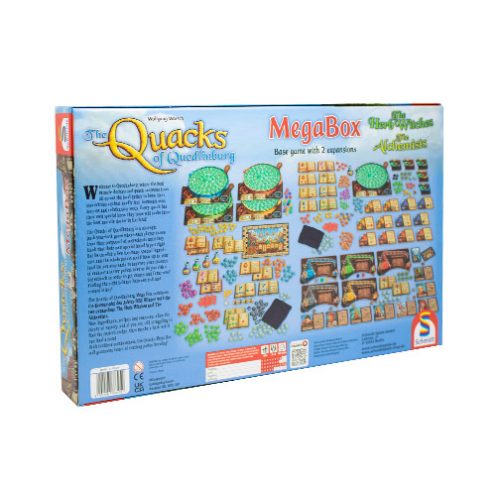 you could earn 4499 victory points

you could earn 4499 victory points

This Mega Box includes the original The Quacks of Quedlinburg, The Herb Witches expansion and The Alchemists expansion, all in one box! In The Quacks of Quedlinburg, players are charlatans  or quack doctors  each making their own secret brew by adding ingredients one at a time. Take care with what you add, though, for a pinch too much of this or that will spoil the whole mixture…
Read More
Category Board Games Tags 9-11 Years, Editor's Choice, Zatu Exclusive, Zatu Platinum Award SKU TCS-QUACK_MEGA_BOX Availability 3+ in stock
Share
Share this
92%

This Mega Box includes the original The Quacks of Quedlinburg, The Herb Witches expansion and The Alchemists expansion, all in one box!
In The Quacks of Quedlinburg, players are charlatans  or quack doctors  each making their own secret brew by adding ingredients one at a time. Take care with what you add, though, for a pinch too much of this or that will spoil the whole mixture!

Each player has their own bag of ingredient chips. During each round, they simultaneously draw chips and add them to their pot. The higher the face value of the drawn chip, the further it is placed in the swirling pattern, increasing how much your potion is worth. Push your luck as far as you can, but if you add too many cherry bombs, your pot explodes!
At the end of each round, players gain victory points and coins to spend on new ingredients to add to their bags, depending on the strength of the ingredients in their pots. But players with exploded pots must choose points or coins  not both! The player with the most victory points at the end of nine rounds wins the game.

Since its publication in 2018, Quacks of Quedlinburg has become a household name amongst board gamers and has even won the coveted Kennerspiel des Jahres award. The premise of the game is a simple one. Over nine rounds, players brew a potion and try to get it as packed as possible without it exploding. Being both easy to teach and addictive to play, it has cemented itself as one of the gateway games into the hobby. Since then, the base game has been joined by two expansions: the Herb Witches and the Alchemists. These three games have all been collated into one, truly mega 'Mega Box' edition.

Come Right up And Try Your Luck

For those of you who aren't familiar with Quacks, let me explain how it works. Each round players simultaneously draw potion ingredients from a bag without looking and mix them into their potion. These bulk out the potion and help you buy more ingredients at the end of each round, which is called when everyone stops adding ingredients. You may think why not just keep adding ingredients?

Well, there are some dangerous chips in the bag called Cherry Bombs and if you place too many of them, poof! Your potion goes up in smoke. If this happens you have to choose whether to collect victory points or to purchase new chips. This try-your-luck gameplay is what makes Quacks so accessible to newbie and veteran players alike. As you develop you add more and more chips to your bag, evening out the odds and eventually pushing them to your favour. These chips also have different abilities that can help your game strategy or get you a bonus after the round is over.

As players draw their chips simultaneously, Quacks plays in roughly the same time regardless of player count. However, the more people you have the greater your chance of seeing someone's potion explode, which really is a highlight. With more people the atmosphere is just more fun, as the familiar sounds of tense decision-making fill the room.

The first of the two expansions included in the Mega Box is the Herb Witches. This expansion allows for a fifth player and adds some fun tweaks to gameplay. The first change is a new ingredient: Loco Weed. This has varying properties depending on which recipe book you choose to use. The next change is an overflow bowl, which sits next to your board. If you ever reach the end of the potion track, you can place chips in here for a tasty bonus at the end.

I must add, however, neither I nor any of my friends have ever got to the final space on the track. The final addition is the titular witches themselves. This brood allow three different one-time perks that can help get you out in a tight spot. This expansion doesn't really change much in terms of gameplay, but it does add some fun extra variations to the base game.

The Alchemist expansion brings with it a little more theme than the Herb Witches. This add-on has players treating one of three patients of peculiar maladies, such as Wing Ear or Chicken Eye. The aim is to develop a cure by moving your token to the end of the Essence Track on your Alchemist board, which sits at the top of the regular board. As this marker progresses, it triggers unique bonuses which can grant extra tokens, rubies, or even victory points. The more varied the ingredients you add to your potion, the further you can develop your remedy. Like the Herb Witches, this expansion doesn't add masses, but it does encourage variety and new ways of playing. Plus, the theme is just a little stronger, as you are brewing up a treatment to cure patients.

The Quacks Of Quedlinburg Mega Box is a fantastic way to grab all its board game goodness at a steal of a price. If you're running short on space, this is also a good way to save finding a place for three full-sized boxes. That being said, the box for this is truly huge, coming in at just over 40cm wide. As Quacks is such a good gateway to the hobby, this is a great game to bring out at get-togethers. Plus, if your friends like it then you've got a selection of ways to change it up with the two expansions. Overall, the Quacks of Quedlinburg Mega Box has been a favourite amongst even my least board-gamey friends, and I'll be using it to introduce more people to the hobby.