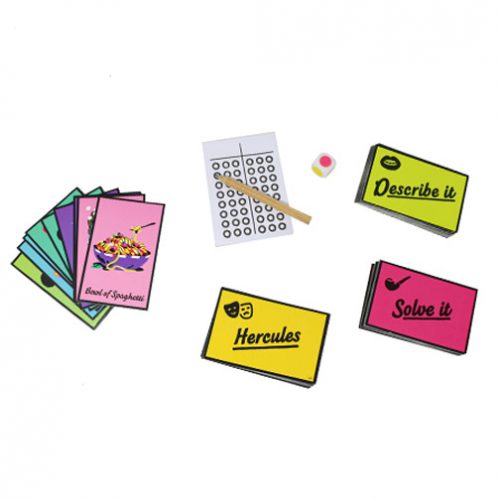 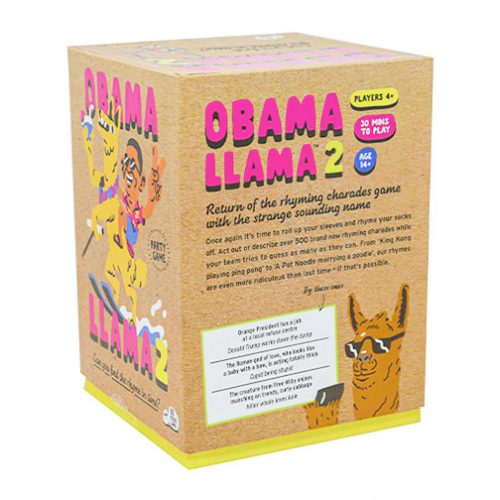 Obama Llama 2 is a reprint of the successful party game Obama Llama, adding in a mixture of funny characters and creatures like Severus Snape and a Tyrannosaurus Rex. The original was just about famous people. As such, this version works a little better with families. Not that you need to know who the person is, but it does help to ease peoples concerns. In Obama Llama 2, players sp…
Read More
Category Board Games Tags Best Sellers, Big Potato, Obama Llama, Podcast Approved SKU ZBP-OB02 Availability 3+ in stock
Share
Share this
87%

Obama Llama 2 is a reprint of the successful party game Obama Llama, adding in a mixture of funny characters and creatures like Severus Snape and a Tyrannosaurus Rex. The original was just about famous people. As such, this version works a little better with families. Not that you need to know who the person is, but it does help to ease peoples concerns.

In Obama Llama 2, players split into two equal teams. The game scales perfectly to any player count and players who don’t want to have the limelight on them can play as the guessers. On your turn, you are running through one of three types of cards as fast as you can. Trying to get your team to guess the rhyme. This can be either ‘Describe it,’ ‘Solve it,’ or ‘Act it.’ This is determined by the roll of a dice.

Describe it cards put a character such as Ronnie Corbett, Michael Jordon or the Pied Piper in a situation where they are all doing something that conveniently rhymes with their surname. Corbett in Orbit, Jordan is a prison warden and The Pied Piper is feeling hyper, for example.
The describers have to try and make their team say what is said on the card as best they can by detailing what is going on without using the words written on the card. “A famous UK comedy duo, big in the 80s, famous for a sketch about fork handles, well one of them is now flying in space,” for example. Solve it works similarly to this, but you are given the description on the card as well as the answer.

Act it works like a game of charades but each answer on the card is about the same thing or person, and this is written on the back of the card. What is taken away in words, is replaced in knowing the subject at hand. The Pope Walking a tightrope is hard to act out, but if your team know it is about the Pope, then the rest should come more easily!

Each card you get right earns your team the right to mark off a circle on the score sheet. For every three marks scored off your team can try and find a match of two symbols in a deck of cards that have been laid out on the table. Each match gets you a victory point counting towards the end game score. When all matches have been found the game ends.

Who would have thought a game could be named after a famous president riding an animal that is almost always mistaken for an alpaca?! Well, Big Potato Games have managed it and they have recently released the second edition to this family favourite, Obama Llama 2!

In this game, players will find themselves having to describe, act out and mime all sorts of rhymes, each as ridiculous as the next, with members of their team frantically trying to guess all three rhymes within 30 seconds. IF you’re lucky enough to gather three points together from your excellent rhyming explanations, then you will have the honour of flipping over cards in the middle of the table, with the aim of finding the matching rhyming couplets, for example, Donald Trump in a rubbish dump! The team with the most rhyming pairs at the end, wins!

Obama Llama 2, created by the Radio 1 DJ Matt Edmondson, in partnership with Big Potato Games, is a great follow on to the original Obama Llama. Bringing 500 new crazy rhymes to the table, players are sure to enjoy the same great gameplay while having some fresh new rhymes to contend with.

I love Obama Llama!! It’s quirky, it’s weird and it gets non-board gaming folk to the table! Everyone I have played this with enjoys it. The second iteration of this game does exactly the same, with some great new rhymes that mix the game up a bit and keep people entertained. The fast-paced gameplay means no one is going to get bored and it is sure to keep you entertained for hours! The game also comes with everything you need to play, so you won’t find yourself rooting around for a pencil to keep score!

If you are tired of charades and want to jazz it up a bit, then this would be the ideal choice! You can not only describe the rhymes but you will also have acting cards where your quality mimes will be the key to your team’s success. Be warned though, as the 30 seconds you have to act out the three rhymes will fly by!

Should you Buy it?

Obama Llama 2 is perfect for all ages and will have everyone at a party engaged and playing along! If you need a game that is quick to learn, easy to play and one that will add great value to any party you host, then this is a game you need in your life!

So, whether it’s George Clooney pulling a mooney, King Kong playing ping pong or Michael Cane suffering a migraine, it is up to you to make sure your team know exactly what rhyme you’re trying to describe or act out. What are you waiting for!? Grab your teammates and go forth and rhyme!