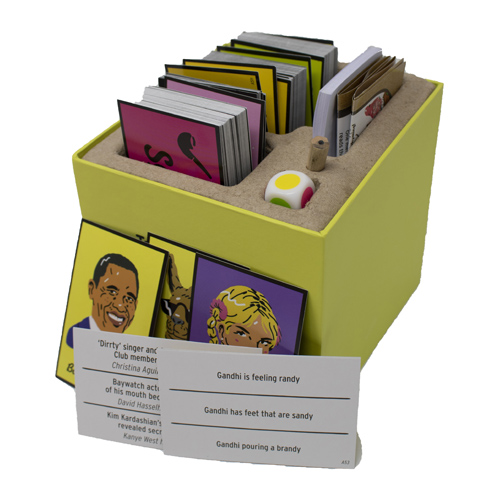 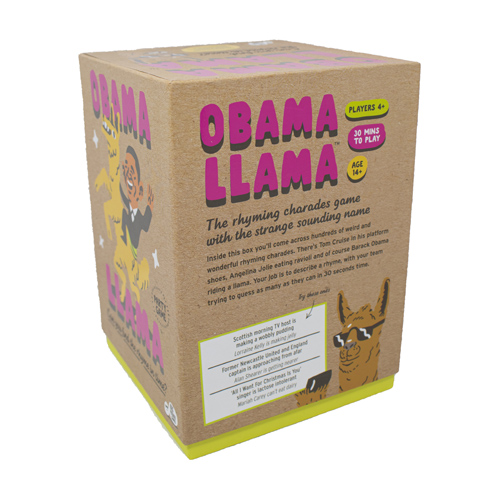 Pay in 3 interest-free payments on eligible purchases. Learn more
Success! We will let you know when this product is available again.
Your email address has been unsubscribed!
Your email address has been unsubscribed!
Notify me when this product is available to purchase!
This email address is already subscribed to this product!
Have you ever wondered how to describe the 44th President of the United States riding an animal similar to that of an Alpaca?? If you answered Barack Obama riding a Llama, then you are going to feel right at home playing Obama Llama, the ridiculous silly rhyming game from Big Potato Games. In each round of Obama Llama, a player must roll a dice which, in turn, will tell them which p…
Read More
Category Board Games Tags Big Potato, Obama Llama, Podcast Approved SKU ZBG-OBLA02 Availability Out of stock
Share
Share this
80%

Have you ever wondered how to describe the 44th President of the United States riding an animal similar to that of an Alpaca?? If you answered Barack Obama riding a Llama, then you are going to feel right at home playing Obama Llama, the ridiculous silly rhyming game from Big Potato Games.

In each round of Obama Llama, a player must roll a dice which, in turn, will tell them which pile to select a card from. These three piles have three different types of cards for the player to read from. Each card will have a rhyme on it, anything from Cara Delevingne on a
washing machine, to George Clooney pulling a moony!

It is up to that player to describe that rhyme to their team, without saying any of the words on the card. Their team can make as many guesses as they please (of course, the sillier the better) and when the right answer is shouted out, the player simply takes another card and tries to describe that rhyme. You have 30 seconds to guess as many rhymes correctly as you can, gaining a point for each correct guess! It doesn’t end there however!

When a team gathers three points, they may turn over two cards from the multiple cards that will be laid out in front of them. There are matching cards hidden within these and it is up to you to find the matching pairs. Once found, keep hold of those cards as the team with most amount of rhyming pairs at the end of the game will be the winner of Obama Llama!

Be prepared for this fast-paced, family friendly game to have you guessing to your heart's content while also having you chuckle and laugh at some of the fantastic guesses this game produces. Obama Llama is a simple to play game, which is great for all the family and will be a hit with kids and adults alike!

Obama Llama had me intrigued by its name alone when I was first introduced to this party game. It consists of a busy concoction of memory, rhyming and acting elements which somehow combine to create a quick-paced, coherent and fun game.

The artwork on the box and cards is very retro and light-hearted, which compliments the quirky nature of the game. All of the components fit nicely into the box and the overall manufacturing quality is high. The instructions are clear and easy to understand and we managed to get a game underway in about five minutes which was great.

Despite the various elements of the game, the primary aim is for your team to guess rhyming phrases. These phrases feature a well-known character or celebrity doing an activity that rhymes with their name. For example, Harrison Ford praising the Lord.

One member of your team will roll a tri-coloured dice for each turn. The dice dictates the type of card they will choose: Describe, act or solve.

For describe cards, you simply need to describe the phrase without using any of the words featured in the phrase. With act cards, your team can see the celebrity on the reverse of the card whilst you do your best to act out what the celebrity is doing. For example Orlando Bloom using a broom. Personally, the easiest cards for players with little celebrity knowledge are the solve it cards. These cards just feature sentences which are read out. Your team just has to guess the rhyming phrase from the sentence alone.

For every correct guess, your team gains a point and for every three points earned, your team gets to have a go at matching two face-down cards. This is where the memory element comes in. There are multiple cards laid face-down at the beginning of the game. When three points are earned by a team, they get to turn over two cards. If the two cards turned over rhyme, your team gets the pair. There are some very amusing rhyming combination cards, with these to mention a few: Tom Cruise and platform shoes, Barack Obama and a llama and Cara Delevingne and a washing machine.

Time for a Rhyme?

Obama Llama has had me chuckling throughout my multiples plays of the game. The rhymes are so absurd that they just make you giggle. Watching people act out and describe these random rhymes is often more amusing than the phrase itself and for a fun-filled party game, this is great.

With each round your team only has 30 seconds to guess as many of the phrases as possible, so the turnaround is really quick and games rarely last beyond 30 minutes. However, if both teams have awful memories then the process of matching rhyming cards is going to take a while, something to consider if you have a head like Dory and don't fancy a game stretching on for more than 45 minutes.

Whilst this game is a silly bit of fun, it is not without some flaws. Firstly, the cards are heavily biased towards modern culture and celebrities. For a modern audience, this probably wouldn't be an issue, but if playing with all generations of your family it may result in a few blank expressions. With the correct audience, this game will be full of laughter at the random celebrity rhymes, but with the wrong audience you will have 30 seconds of bewildered silence each round.

My other concern is that there are not many cards available in the box if playing multiple games with the same people. After a handful of plays with the same audience the rhymes become easily identifiable for the simple reason that you can remember what is on the cards. I'm sure that the game publishers, Big Potato, are aware of this and are no doubt preparing for a card expansion to refresh the gameplay.

Overall I really enjoy Obama Llama. It's a brilliant little party game which has players laughing throughout. It plays really quickly and has great components. It's very easy to learn and really gets your head whirring with different rhyming combinations.

If you're anything like me, then after a play of this game you'll be buzzing with your own rhyming combinations to submit to Big Potato Games. Obama Llama is definitely worth a try and will make you forget your typical game of charades.