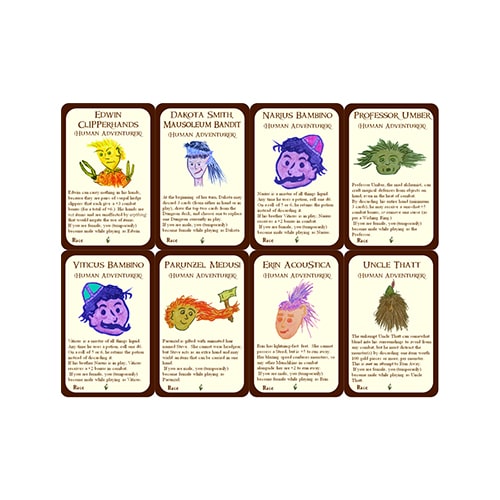 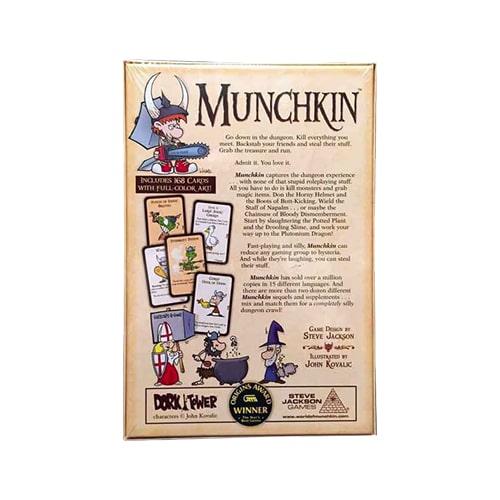 you could earn 1735 victory points

you could earn 1735 victory points

With outlandish and silly jokes that never seem to get old, Munchkin is assured to be great fun for any adventuring party. And while they're laughing, you can steal their stuff.

Go down in the dungeon. Kill everything you meet. Backstab your friends and steal their stuff. Grab the treasure and run.

Admit it. You love it.

Kill the monsters. Steal the treasure. Stab your buddy. Munchkin's infamous tagline couldn’t be more accurate. Coming up to nearly 20 years old, Steve Jackson’s award-winning game is showing no signs of slowing down its onslaught of slaying, looting, and backstabbing.

In fact, a new collectable card game take on Munchkin has recently been released. But for now lets delve down into the original Munchkin’s ludicrous dungeons and see if this three to six player card game is right for you.

So, What’s it About?

Munchkin is essentially a satirical and simplified take on the dungeon crawl experience, casting players as humans, elves, dwarves, and halflings - or a messy combination - as they kit up and face the dangers of the adventuring trade. Brought to life by John Kovalic’s excellent illustrations, Munchkin injects a bit of humour into tired fantasy tropes, lampooning aspects of geek culture at every opportunity.

This tongue-in-cheek approach has proved to be massively popular over the years, with the Munchkin universe expanding into comics, colouring books, toys, clothing, shot glasses, bookmarks, and even other franchise games such as Smash Up! , Castle Panic, and Gloom. Despite a huge variety of expansions offering alternative themes, Munchkin has never become too complicated, with its gameplay remaining largely consistent through a number of editions.

The premise of Munchkin is simple. Build a character out of your hand of cards and advance levels by defeating monsters. The first player to reach level 10 is the winner.

Players will take turns revealing the top card from the Doors deck. This may be a monster which you must immediately fight, a curse, or sometimes a new class, race, or other benefit. Fighting simply involves comparing the combined total of your level and any modifiers from items with the monster’s level. If you win you may advance a level and take a number of treasure cards from the deck.

But this isn’t as easy as it sounds. Upgrading your character’s weapons and armour takes time, as treasure is only rewarded after defeating an enemy. Even if you do manage to race ahead to level nine, your so called friends will waste no time in hindering your efforts. In fact, those long time buddies of yours have plenty of options to stop you dead in your tracks.

Any round of combat can be interfered with by any player. Cards such as Monster Enhancers or Wandering Monsters can buff up the perils a player faces, leading to hilarious escalations as a harmless Potted Plant is suddenly joined by a level 20 Plutonium Dragon wielding a Magic Missile.

On the other hand, Munchkin offers opportunities for joyful co-operation. Perhaps you’re struggling with a bad hand of cards early on, so you ask for help. One player can add their combat strength to yours, hopefully giving you the edge to win the battle.

But don’t expect such graciousness for free! Combat in Munchkin can introduce a decent level of negotiation - or bribery - making gameplay hugely interactive. Your opponents may demand a majority of your earned treasure in return for their ‘heroic’ services, but you can always turn them down and ask the player who desperately wants that Swiss Army Polearm you’re wielding.

Why Should I Play It?

It is in these moments of passive-aggressive negotiation where Munchkin really shines. Gameplay itself is very simple and perhaps overly reliant on luck, but the game’s mechanics for interaction often make for a hugely entertaining experience.

Do you capitalise on your bluffing skills in attempt to make certain players back down from interfering with your combat? Or do you try for the opposite, forcing your friends to blow all their powerful cards early in a combat you were never going to win? Your lowly level three elf might nobly accept an opponent’s pleas for help as everyone else barrages them with monster buffs, content with the knowledge that next turn you’ll safely be able launch a tirade of Level Up cards and steal the win!

It may not be the most intelligent example of satire, but Munchkin’s good-humoured digs at fantasy role-playing tropes and geek culture are sure to generate a few laughs from players. This harmless lampooning could also be considered quite inviting to any newcomers to tabletop gaming.

Munchkin’s lighthearted humour reassures anyone with a slight interest in role-playing or board gaming that this tabletop world of sword and sorcery is more than a nerdy sub-culture demanding to be taken seriously. Munchkin’s satire helps to both embrace and shatter the popular stereotypes of the geek and the nerd, promoting gaming as simply a means to gather with friends.

Hmm, What if I’m Not Keen on the Theme?

Despite being a franchise in its own right, Munchkin has continued to expand its audience through the regular release of licensed editions. Fans can now loot and backstab their way through the worlds of Adventure Time, The Wizard of Oz, The Walking Dead, and many more, drawing players from a multitude of fandoms into Munchkin’s simple and comically sadistic gameplay. Some of these sets can be combined for an even more ludicrous experience.

My own tastes may have shifted over the years, but I can’t deny the importance of a game that performs so well at drawing potentially hesitant people into the hobby.

Munchkin is a great gateway game in more ways than one. Sure, it’s simple and accessible, but it also acts as a guide for players to map out their next steps. Maybe you're drawn into the elements of role-playing and fantasy and wish to explore this more with games like Dungeons and Dragons. Perhaps you like the idea of fast-paced dungeon-crawling and character progression but with more structure - maybe try Descent. Alternatively, you may have realised that luck-based games aren’t for you but you’re attracted to the fantasy theme - look into Lords of Waterdeep, or eventually Gloomhaven.

So, if you’re a newcomer to the hobby or just looking for a light game to play over a few drinks, then I recommend readying yourself for a ridiculous ride through the world of Munchkin!