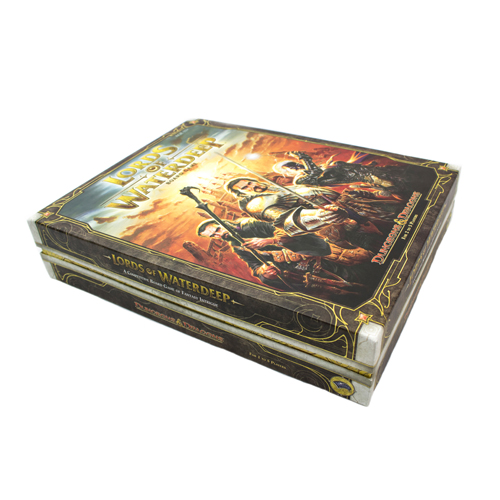 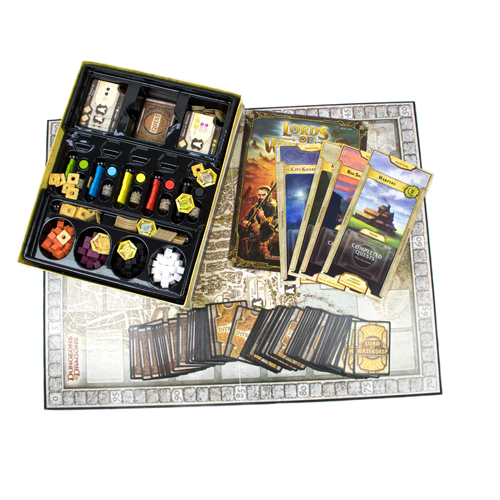 you could earn 3995 victory points

you could earn 3995 victory points

Lords of Waterdeep is regarded by many as a gateway worker placement game. Meaning that it’s a good game to teach people how to play worker placement games. Set in the Dungeons and Dragons universe, you will place your wooden figures (called meeples) onto specific spots on the board, gaining actions or resources and blocking that space from all the other players. To help you focus…
Read More
Category Board Games Tags BGG Top 100, D&D Waterdeep, Dungeons & Dragons, Podcast Approved, Wizards of the Coast SKU ZEG-WTC388510000 Availability 3+ in stock
Share
Share this
96%

Lords of Waterdeep is a strategy board game set in the Dungeons & Dragons universe. Regarded by many as a gateway worker placement game, Lords of Waterdeep sees players vying for control of a sprawling city. You will place your wooden figures (called meeples) onto specific spots on the board, gaining actions or resources and blocking that space from all the other players.

To help you focus in a little at the start of the game, you are given a ‘Lord’ card which gives you an end-game scoring potential. You can choose to let this guide your path through the game or you can ignore it! During the game, you will be attempting to complete various quests. To do so, you will need to hire different classes of adventurers: clerics, warriors and the like, all represented by cubes. Typically, you will try and gain adventurers/cubes as efficiently as possible to get through as many quests as you can. Quests usually reward you with points and come in a number of types - but, in reality, this doesn’t change their function.

As the game develops, you will be able to purchase buildings. These act as extra spots on the board. This means that each time you play the board is a little bit different, and therefore your planning requires some adjusting. What's more, when other players use one of your buildings, you get a reward too!

You will compete for important places on the board like taking control of the first player marker (to guarantee you get those spots), to getting the best choices of the next available quests, all the while keeping an eye on your ‘Lord’ bonus.

There is a simple elegance to the mechanics in Lords of Waterdeep. On a turn, you place out a meeple and gain the benefit. Of course, this doesn’t scratch the surface of the different options you have in that one simple act, options that are made even more interesting when you add in The Scoundrels of Skullport expansion. Lords of Waterdeep is a game everyone should have a least played, and perhaps even own - so what are you waiting for?

Lords of Waterdeep’s box proudly proclaims that name, the words ‘Board Game’, and then Dungeons and Dragons. That’s not unusual considering it’s a board game set in the Forgotten Realms part of D&D, but I’ve seen it put people off, people who consider D&D either a lesser pursuit or not for them.

That’s a shame, as the side panel text is perhaps more important: A Competitive Board Game of Fantasy Intrigue. Why? When you start playing Lords of Waterdeep you find it’s only tangentially connected to role-playing or even fantasy, and is instead a classic introductory worker placement game.

Every player Lords of Waterdeep chooses a faction from the Forgotten Realms world, such as the Harpers, which also tells you what colour you are. Then every player is assigned a random Lord or Lady of Waterdeep, the mysterious manipulator who you play.

This does affect the game as every character awards bonus points at game end for certain quests and building outcomes. E.g. a lord who rewards you points for every completed Arcana quest. Quests? Yes, because the game is about choosing and completing quests, but don’t think there’s any fighting.

You start with a group of meeples who you take turns placing on the buildings on the board, on which you can either take quests, collect resource tokens, build buildings (which everyone can place on) or play special Intrigue cards.

Quests are completed by gathering enough of the right coloured resources, then cashed in for points. There are different types of quests (e.g. Arcana and Commerce), which require subtly different resources and everything has fantastical names so you know you’re sending aid to the Harpers among others. Intrigue cards can block opponents or allow changes to the resource acquisition rules.

The player with the most victory points after eight rounds of full meeple placement and addition of secret goals wins.

Am I sounding a bit vague? There’s a reason for that. In theory the coloured resources represent people, be they fighters or magicians, who you are sending off on quests. So, you collect a quest from the inn, hire enough fighters etc, send them off and profit off the result like a true Lord of Waterdeep. Except, unless you have pimped your game with special coloured meeples, there is a big disconnect. You never feel like a devious lord hiring classes. You feel like someone placing meeples to gather purple and white cubes (etc.) But is this a problem?

As a devious Lord of Waterdeep, perhaps you would just regard people as pawns, and the sensation fits the game. As a human in 2018, you can still have plenty of fun in a perfectly constructed and very well balanced worker placement game that doesn’t drag you into the fantasy tropes people get put off by when they see the cover. Yes, all the quests have themed name, there is good artwork, they tried. It’s just not immersive in the Forgotten Realms sense, just the gaming sense.

Components are nicely done, and an attempt has been made to create an insert which will hold your tokens. Now, I’ve already hinted above how, despite my own satisfaction with the pieces, there’s a demand for shaped meeples to represent mages and their fellows, so your mileage may vary.

D&D nuts are not going to find Lords of Waterdeep as lyrically rewarding as a full RPG campaign. People unfamiliar with D&D are not going to be phased by not knowing what a Harper is. Lords occupies a perfect middle ground between the two, allowing people wanting a light game, an introductory game, to really enjoy it. But if you like hardcore worker placement you can still enjoy a snack here.

Lords of Waterdeep is, to me, the perfect example of light worker placement and one that gets unfairly missed.