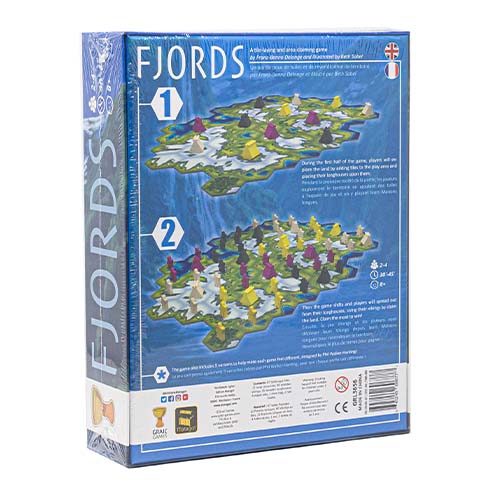 you could earn 3265 victory points

you could earn 3265 victory points

Explore a landscape so stunning that even a Viking would hold their breath in awe… Fjords is a tile-laying game that takes place in two phases. The first one invites the players to explore the fjords around them by laying hexagonal landscape tiles, creating a map that serves as the gameboard. In the second phase, players begin from the longhouses they placed during phase one a…
Read More
Category Board Games Tag 9+ SKU ZBG-GRLFJO001170 Availability 3+ in stock
Share
Share this
76%

Explore a landscape so stunning that even a Viking would hold their breath in awe...

Fjords is a tile-laying game that takes place in two phases. The first one invites the players to explore the fjords around them by laying hexagonal landscape tiles, creating a map that serves as the gameboard. In the second phase, players begin from the longhouses they placed during phase one and will walk the landscape, claiming as much of the plains and cliffs as possible.

The winner of the game will be the player who has claimed the most land. Savvy placements and the ability to plan ahead yet act tactically will be your most important tools.

This new edition of Fjords differs from the original release in the following ways:

The game now plays up to four players.
The game contains five new variants/modules designed by Phil Walker-Harding. These add optional variety and flavor to the game.

Cwm fjord bank glyphs vext quiz is a perfect pangram it uses all 26 letters only once and does (just about) make sense. Whilst there are no cwm glyphs here, in Fjords there are plenty of Fjord banks to vex even the most quizzical!

Fjords is a great looking game of tile laying and meeple placement. The beautiful artwork is by Beth Sobel (Cascadia, Calico, Three Sisters, Wingspan) and the great cover art is even replicated on the inside of the box. The 64 landscape tiles depict various combinations of mountains, plains, and oceans.

There are 22 rune stones depicting 7 different runes either colour-coded for one of the up to four players or neutral colours for general use. The meeples, chunky little Viking farmers with helmets and pitchforks, are one of my favourites. (One of mine had his head missing but we'll say he's a berserker!) and each player also has 4 longhouses.

Fjords gameplay moves through two phases. First, the tile-laying/Exploration phase where you also place your longhouses. You choose one out of four tiles on offer and must place it adjacent to at least two others.

Secondly, the Settlement phase, where the pitchfork-wielding Vikings lay claim to their farmland. They can only be placed next to their longhouse or one of their fellow clansmen. Tiles must be linked by plains to be considered adjacent. Placement alternates until all are placed, or no more can be legitimately placed.

This is where the importance of the mountains comes into play. The tile laying can lead to long fjords backed by impassable mountains with narrow valleys of plains between them and the ocean. A judiciously placed longhouse at the head of such a valley can leave the whole strip for you to populate at your leisure.

Another factor that is not immediately apparent is that when you have finished laying the terrain some areas may be "unfinished" through lack of a matching tile. These gaps become in effect additional impassable barriers.

Fjords hinges on the most effective placement of your longhouses. These can only be placed on a tile that you have just laid. If you have not placed your full four by the end of the first phase you miss out. This can happen sooner than you might think as there may be several unplaceable tiles left over at the end. In the base game, with no runes, it is easier to block areas off for your personal fiefdoms though there are still some perils.

You may happily place a longhouse at the neck of a narrow valley looking to extend the plains beyond it and then never draw the right tiles to do so. There are increasing number and variety of tiles for 3 and 4 players.

Countering the above concepts consider the introduction of the Rune Stones (actually cardboard but let's not nitpick!). There are 6 communal ones that are placed on marked tiles as they come up: all Mountain, a coastal tile, and all Plains and these give scoring bonuses to any player with Vikings adjacent.

More interesting are the individual player runes. The home Rune marks one of your longhouses as special and doubles the score of your Vikings next to it. The other three: Journey, Horse, and Wisdom allow you access to different blocked tiles when placing Vikings. These all make it much more difficult to block areas from your rivals.

The Horse in particular is a game-changer as it allows you to cross mountains up to 3 tiles away. As powerful as these Runes are, each player has only 1 of each so use them wisely.

Each Rune is considered a mini-expansion and you can play with as many or as few as you like. You each get a handy player aid to remind you of their effects. There is a 7 Game suggested order of introducing the Runes which doesn't even get up to using them all together.

You should definitely play one game without them to get the feel of what they can introduce and then it's up to you. Personally, I play vanilla with newbies and light gamers and then introduce the Strength and Water Runes for extra scoring and the Horse and Journey as your get out of jail cards.

Fjords is lovely. The artwork's great, as are the pitchfork-wielding Viking meeples. The production is top quality, it's easy to learn and quick to play - the stated 30-45 minutes is realistic. The tile-laying gives you a different layout every time and whilst the combination of any of 1 to 7 runes is not endless it's a lot (I think it might be factorial 7! i.e. 5040 - maths fans correct me).

Just like the Fjords themselves, I find it hard to judge the depth. As you go along, it all seems very simple. Then you try to set yourself up to control long valleys. Then you don't get the tiles you need and your strategically placed longhouse is sitting at the head of nothing.

Another thing with Runes is, even if you build your own valley, someone can suddenly ride his horse over the mountain and land in the middle of it, possibly even cutting you off from what was once yours!

In the games I've played the scoring has been very close and a few bonus tile scores can tip the balance. Once someone (me) looked like they'd won with a lot more territory but actually lost out because of the bonus tiles to someone else (the wife). Finally, it's good as a family game. It says from 8 years up and that's definitely possible with maybe more emphasis on the tile matching and less on the scoring.

Fjords is a reworking of the game with the same name released about 8 years ago. Then it was only 2-player, with no runes and you just drew one tile out of the bag each turn. Of course you can still play this way but I think having the choice of four tiles is a key element and introduces some level of strategic thinking.

If you like a game that consists of pitchforks then I should've had you in the first sentence of this blog!