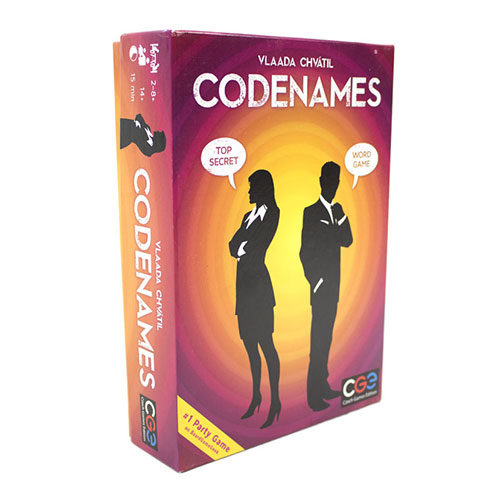 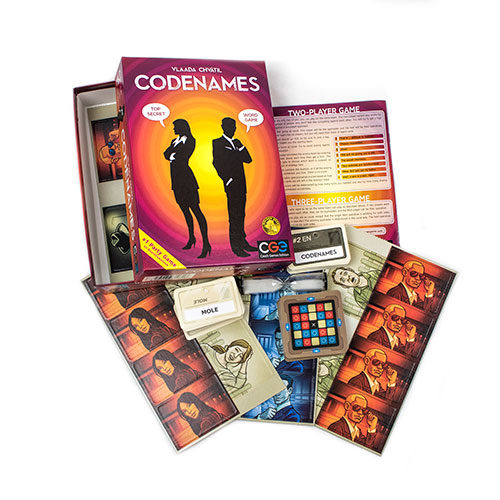 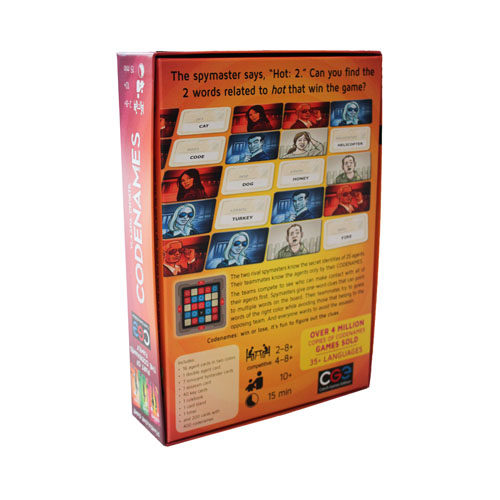 Add to Wishlist
Codenames, a party game suitable for 2-8 players, will see you working alongside your teammates and nominated spymaster to work out where your fellow agents are in the field, while also making sure to avoid the innocent bystanders and the dangerous assassin! Czech Game Edition’s Codenames is a fantastic, easy to play word association game that sees players split into two teams…
Read More
Category Board Games Tags Best Sellers, BGG Golden Geek, BGG Top 100, Codenames, Czech Games Edition, Dice Tower, Editors Choice, Golden Pear, Platinum, Value For Money SKU ZBG-CGE00031 Availability 5+ in stock
Share this
91%

Codenames, a party game suitable for 2-8 players, will see you working alongside your teammates and nominated spymaster to work out where your fellow agents are in the field, while also making sure to avoid the innocent bystanders and the dangerous assassin!

Czech Games Edition's Codenames is a fantastic, easy-to-play word association game that sees players split into two teams, each team having a nominated spymaster. These spymasters are given a grid that details the exact location of all their agents in the field. It is up to those spymasters to communicate the locations of the agents to their teammates. However, there is one big catch! The locations are all associated with words and the only way to communicate these is to give one-word clues!

Once a clue has been given, it's up to the team to work out which words the spymaster is trying to communicate to you. If you select a correct word, well done, you’ve found a fellow agent! Be careful though, select a wrong word and one of three things can happen! You could have mistaken an innocent bystander for an agent, a rather foolish thing to do! You could have found one of the other team's agents, which will simply give them the upper hand! But worst of all, you could find the dangerous assassin. Find him, and it's game over for you my friend!

Work together to find all your agents and you will be victorious and successfully complete your mission! This game will have you on the edge of your seat. Be careful, because when you think you’ve found the word, you may just start second-guessing yourself!

Codenames is a great party game and one that has grown in popularity massively! It's an essential game for anyone's collection and one that is sure to be a hit with all!

OK agents your mission briefing begins here. From now on everything you thought you knew about the world was in fact a lie. There are spies among us and they are not hiding in the shadows, but who are they?

Your neighbour? Your work colleague? The mad cat lady from number 47?

Who is friend? Who is foe?

What is worse is that there is an assassin is hiding in their midst.

We cannot risk a leak. Who do you trust? Your only true friends are your team. So your spymaster can only issue you with covert clues to help you identify those trusted agents out in the field. What intelligence we have to hand tells us that our enemy is in the same situation. Will you and your team be able to contact those agents and bring them in safely before the assassin strikes. Or will the opposing forces manage to recover their agents first? Time is critical.

As always, should you or any of your force be caught or killed, the secretary will disavow any knowledge of your actions.

Agent “X” due to the sensitive nature of this mission you will not be issued with the usual exploding pens, laser watches or bullet proof cars. We cannot risk exposure. Instead we will be issuing you with the following equipment:

Before you rush off Agent “X”. Be aware that the enemy can hear every word that is said and will be actively trying to feed false ideas and leads to your team. You have been warned! 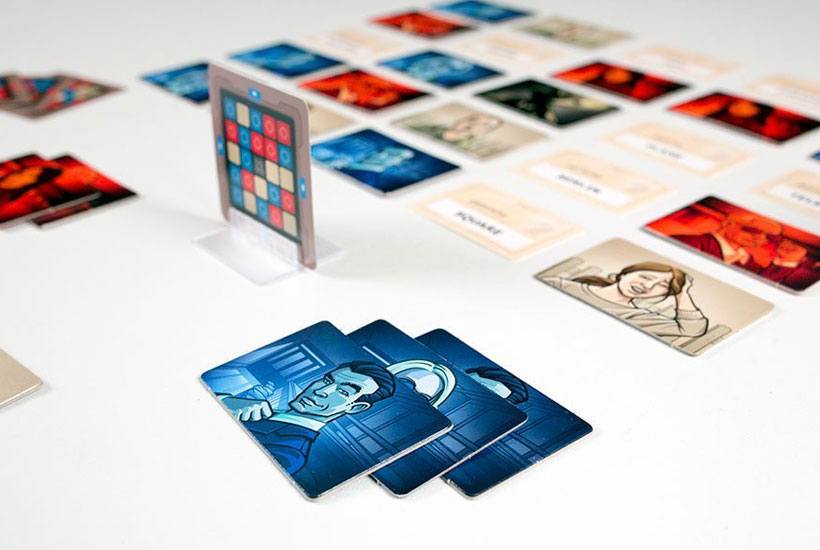 OK agents, listen very carefully I will say this only once. Once out in the field, all communication will be eavesdropped. So from this point on I will only be using the approved code to communicate. You and your team will need to decode the transmission to locate the relevant covert operatives and bring them in from the cold.

Wait what is that….

You have not been issued with the codebreaker?

Assassin on the loose?

Right, old school code-form it is then. As you know all agents are identified by one word codenames. I will issue you with one word and a number. You will use that to decide on the names of the agents I am referring to.

For example if I state “Flying 4," you will automatically know the four agents are, “Plane”, “Robin”, “Balloon” and “Saucer”. Due to all communication being tapped I will not be able to communicate outside those transmissions.

Be careful if you decode incorrectly, if you're lucky you will just point out an innocent bystander. If not, you might uncover one of the opposing spies or even worse the assassin, and he will wipe out your entire force. GAME OVER!

Sounds Easy? Well it is Not!

You will be faced by 25 potential agents. Only the two Spymasters will know the true location of everyone. Using only one word and one number they will try to lead you to your agents, while avoiding the innocent bystanders or the dreaded assassin. You would think that would be easy to do? No one would give a clue that leads you to an instant lose, would they?

Normally no they would not. But that is the beauty of Codenames. Everyone thinks differently and because the spymaster is not allowed to talk, you are up against a tight time limit, the rest of your team is thinking of different words and the opposing team are trash talking and throwing out red herring suggestions to put you off.

All of a sudden Codenames becomes a lot more complex than a simple word guessing game. 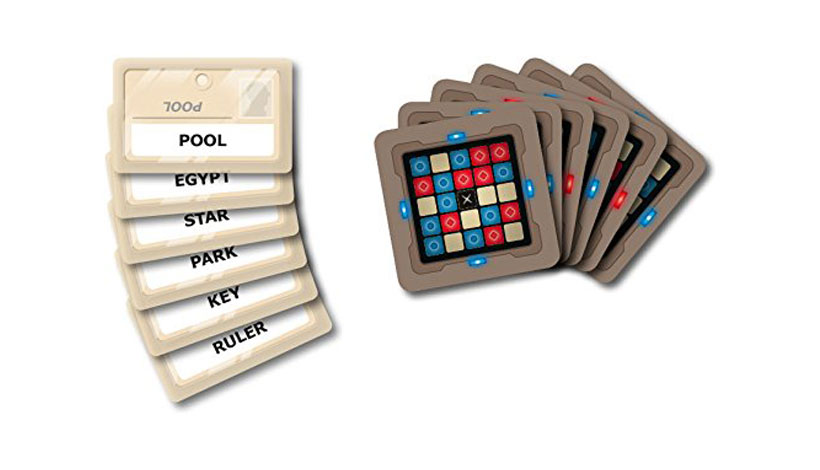 There is not a lot of room for strategy in Codenames. In saying that do not think it is a game of luck either. Well not in the traditional sense. The luck and strategy all come together when you give your clue. Have you strategically picked the best one word clue linking as many of your agents together as possible without hinting at a random word?

Will you be lucky enough that the rest of the team are thinking like you? Here is an example.

Your clue is “White-3.” Your words are Black, Wash, Snow, Rabbit, Paper, Chocolate, Out.

If you said Wash, Snow and Out? Well done you got all three correct. If not? Back to spy school you go. Yes the example I gave was mean because all of the words could be used with white. But hopefully you can see how tricky it can be to interpret the clue.

It is agonising watching as your teammates discuss selecting the assassin as an answer. I mean who would have picked “Skate” when the clues was “Bored”? Really I ask you.

Who is it For?

Codenames is a party game and is best suited for larger groups. I have played with four players all the way up to 12 and the more the merrier. Although, the more timid players might get a bit sidelined with the larger group sizes.

You can in theory play Codenames with just two players but in my opinion it just loses all of the attraction that a social deduction game can bring. I would suggest only playing with six or more players to get the best from the game and the social fun that can occur.

Codenames is a great fun game for groups of six or more who are up for a bit of banter. It can be a good filler in-between some heavier games, allowing for some brain flexing in alternative way. Having played as a family game I have struggled to enjoy it as much. Although for a large family I could see it making its mark.

The components, while not mind blowing, are of a nice quality and given the number of words included you would struggle to play the same game twice. Codenames will remain fun and fresh as long as you enjoy the mechanics of the game with the right groups of people.

I personally am not a big fan of "Social Party" style games but Codenames is the exception to the rule. It does not get to the table a lot but when it does it tends to stay there for a while.