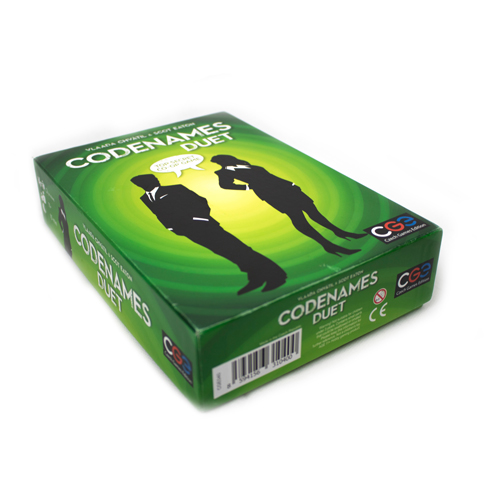 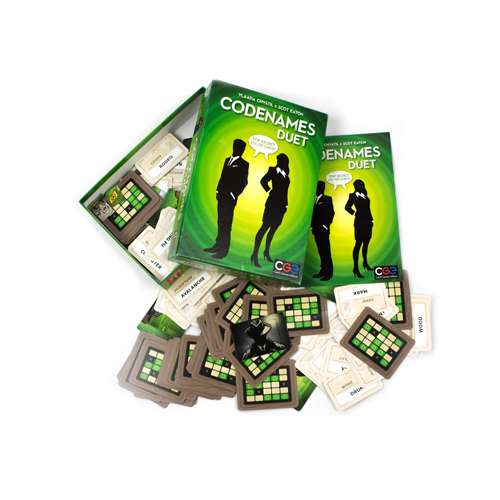 you could earn 1139 victory points

you could earn 1139 victory points

Codenames: Duet is a two-player, co-operative version of the very popular Codenames. Two covert operatives are on a secret mission in a crowded city. Each knows nine secret agents that the other must contact. Communicating in coded messages, they must sneak past three enemy assassins to complete the mission before time runs out. With a grid code words laid out on the 5×5 table,…
Read More
Category Board Games Tags Best Sellers, BGG Golden Geek, Codenames, Czech Games Edition, Great For Two, Podcast Approved, Scot Eaton, Spy Games, Value For Money SKU ZBG-CGE00040 Availability 3+ in stock
Share
Share this
85%

Codenames: Duet is a two-player, co-operative version of the very popular Codenames. Two covert operatives are on a secret mission in a crowded city. Each knows nine secret agents that the other must contact. Communicating in coded messages, they must sneak past three enemy assassins to complete the mission before time runs out.

With a grid of codewords laid out on the 5x5 table, the players take it in turns to give a one-word clue, followed by a number which indicates the number of words on the table that are linked to the clue. The clue giver wants to link as many of the ‘correct’ words as possible whilst avoiding assassins and decoys. There is a time limit on the number of turns in the game and the number of wrong answers that can be accepted, so you need to be more ambitious than giving single clues.

With cleverly designed, double-sided clue cards, each player is given information about the codenames of the agents that the other player must guess. Together you must guess them all, but each side of the clue card has some common agents as well as one common assassin. This extra knowledge can be used to try and deduce even more about what your team-mate is trying to communicate.

Codenames: Duet adds to the spy theme with a campaign where you will travel around different cities. In each city you will have a different challenge with a different balance of timer tokens and acceptable mistakes, forcing you to swap more ambitious coded messages and generally increase your ability to think as a team.

Whilst Codenames: Duet is primarily a two-player game, it can be played in teams with four or more players. But, if you’re looking to play Codenames with a larger group, then you can always checkout the original game, Codenames: Pictures, or many of the other themed games in the Codenames range.

Two covert operatives are on a secret mission in a crowded city. Each knows nine secret agents that the other must contact using their codenames. Communicating in coded messages, they sneak past enemy assassins in an attempt to complete their mission before time runs out. If successful, the agents move on to different cities, being sent tougher missions around the world, ever careful to avoid the assassins.

Codenames Duet is a cooperative word game for two players (even though the box says you can play as two teams). Codenames will be a familiar name to most gamers. The original Codenames is one of the most loved party games, has won the Spiel Des Jahres, and has had a number of sequel releases, which are all available to purchase here. If you'd like to read about the original Codenames, see our review.

We particularly enjoyed Codenames with big groups of friends, so we were nervous about Codenames Duet as a two-player experience, but how does the game play?

Codenames Duet plays much like the original Codenames, but instead of two groups competing against each other, you have two players who must work as a team to find all the agents. As in the original game, you are presented with 25 words you have to guess from. Each player has a private grid that dictates which of the words are agents that have to be guessed, which of the words are clueless bystanders, and which are assassins.

Each turn you have to give your partner a two-part clue, one word and one number. The word should be a link between words on the grid that are agents, while the number is the number of words that need to be guessed. Your partner then guesses as many words as they like one by one, if they guess an agent you cover the word with a green agent card and may continue guessing. If it's an assassin, the game ends as a loss.

If they guess a bystander then their turn ends immediately and they place a bystander token. If they opt to end the turn voluntarily they take one of the green check-mark tokens. These tokens are double-sided and act as an in game timer, with each passing turn you'll be taking one token or the other.

There is an included campaign map, where you travel around the globe activating your spy network. As you progress through the campaign you will have to play the game with different restrictions, such as a more limited number of turns. Or perhaps you aren't allowed to reveal as many civilians. These challenges get extremely hard towards the end.

Codenames Duet does a great job of replicating the gameplay of the original for two players and is a far superior option to the two-player mode in the original. However, it can be a bit more stilted in terms of flow. As both players are taking turns giving clues and guessing them, there is no downtime for the clue giver to think. This, in turn, seems to result in longer pauses, as the clue giver desperately tries to link their words together and avoid the three assassins.

I'm not sure if it's my imagination, but the included words also seem to link together less, resulting in less impressive turns and even longer thinking time. Of course, you can freely swap over or mix the words with other Codenames games to add an insane level of variability to your 25-word grid.

The campaign map is a nice idea and I wish they had done more with it. In practice, each mission simply varies the number and type of counters you use to form the timer. This does add more challenge and certainly adds some replayability, but I would have liked to see some countries using some extra rules, perhaps restricting the types of words you can use for clues or similar.

Codenames Duet is a very interesting translation of a party game. However, I feel it loses the essence of the original Codenames. There is a joy to be had in watching your team debate among themselves until they come to an agreement on which word to guess, sometimes leading each other on the most bizarre tangents. That simply can't be recreated in a two-player game.

Instead you have a more serious game with higher stakes, and this is by no means a bad thing. Codenames Duet does give the essential Codenames experience for two players and while I don't think it's as good a game as the original, it is still a good game.

I'm really impressed by the way that Codenames Duet takes the mechanics of Codenames and makes an addictive cooperative game for two players. I admire the clever design and I'm actually still trying to figure out how the cross-over assassin and the cross-over agent words can be used as information for you to deduce some correct answers.

Even before I figure this out, there are definitely some interesting and helpful situations that can arise. When one of the assassins on your side of the card becomes covered with an agent card, an opportunity opens up for you to use a good clue.

I still think that playing Codenames with a big group is a superior experience. There's a lot more interaction, a higher level of energy around the tables and it's a much more accessible experience. That said, if you do want to play with two players, then Codenames Duet is a much better experience than playing the two-player variant that came in the original Codenames box.

The game provides a massive cooperative challenge for players straight out of the box, but also offers you a way of incrementally increasing your difficulty by moving through different challenges. Some challenges allow more bystanders so you can afford to take bigger risks on high-value clues, but others just stretch the game length but allow you to make no wrong guesses at all, rewarding a slower and more precise style of clue-giving.

I originally wasn't sure we'd keep our copy of Codenames Duet, but it has certainly grown on me over time. The two-player game is a great chance to try and use more focused clues for the one person you're giving them to, so you can draw on life experiences, in-jokes etc, much more than you can in the original. If you normally play with two and think that a word association challenge would work for you and your playing partner, then it's well worth taking a look at Codenames Duet.

Editors note: This blog was originally published on December 19th, 2017. Updated on January 5th, 2022 to improve the information available.