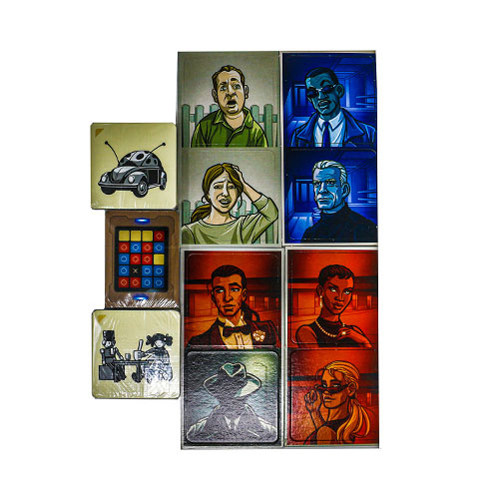 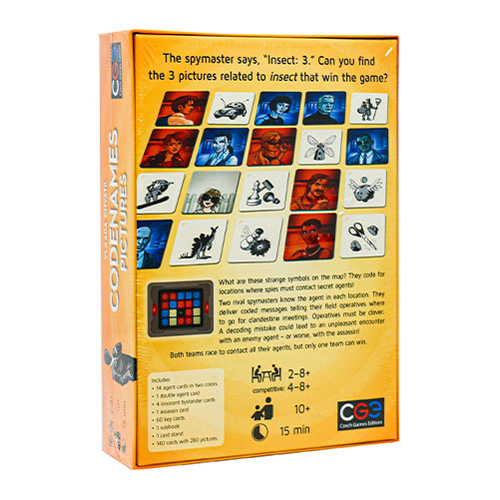 The pictures are a joy to behold, ranging from an igloo with a deckchair next to it, to a hand grenade pineapple hybrid, to a parrot with a microphone, to a mummy wrapped in toilet roll… You get the picture!

The Spymaster will have to think of clues relating to the pictures on their locations but be mindful of the innocent bystander locations and their opposing team’s locations. Oh and, of course, avoiding the Assassin at all costs. The pictures can bring some surprisingly weird and wonderful clues as there is a lot to interpret in the pictures. This makes game suitable for younger children as there are no words to read and the youngsters will no doubt find the pictures intriguing.

Codenames: Pictures even suggests some alternative ways to play, such as combining words and pictures into the same game (if you have a copies of both games) and gives rules for an “Assassin Ending” variant where you must guess the Assassin once you have found all of your agents.

Codenames: Pictures is a fantastic addition to Vlaada Chvátil’s growing Codenames franchise and offers something totally different while remaining faithful to the winning formula.

Being a spy can't be an easy job. They get a bad rep from all the movies! Arrogant, lone wolf, obnoxious, know-it-all... For some James Bond types that may be correct, though I can't imagine how they would stay spies for very long. Being a spy requires a higher level of thinking, and an ability to be on someone's level of understanding. Being able to just get what a group are saying. Receiving messages that are elaborately thought out and cover every base as necessary. You'd need to be able to read between the lines and think outside of the box!

Experts say that playing board games is good for cognition and thinking. They keep you sharp! So, these spies must have played tonnes of board games to be good at their jobs, right? Surely all this playing will help us one day become sharp enough to wear suits and drink martinis. So, the question is... Is there a board game that tests one's abilities to be a forward thinker and decrypt illusive and complex messages? Yes. There is! It's Codenames: Pictures by Czech Games Edition.

Players split into two teams of about equal sizes and they then choose a spymaster and a colour; red or blue. The spymasters sit on one side of the table with the rest of the spies, the operatives, on the other side. The spies in the field aim to meet specific contacts.

To set up the game, lay random pictures cards out on the table in a 5x4 grid. Spymasters then choose a map card that is hidden from the operatives. The map has a 5x4 grid on it with blue, red, beige, and a black square.

The aim for the spymasters is to get the operatives to choose the corresponding picture cards from the map card of their colour. To do this, they need to say a word and a number, like "Car 2" or "Robot 4". The word should encompass as many pictures as possible and the number indicates the number of pictures associated. Operatives don't have to guess the number stated but should aim to do what they can. The first team to make contact with all their spies wins.

A good spymaster will say something that's open but distinguishes pictures from one another. There is a rule of +1 when playing; you say "Dog 3" so you want the operatives to pick three associates cards, but they can choose four. That means your operatives can pick up on any previously missed clues! The problem with being a spy in the field is that the world isn't just full of spies. Make a wrong guess and you might contact an opposing spy, some average Joe, or the assassin. The assassin is the one to avoid at all costs - make contact with this shady character and it's an immediate loss!

Codenames Pictures (designed by Vlaada Chvátil) is for two or more players, focusing on big team play. Having four players or more is the optimum number to ensure a game can be fully played. There is also a two-player variant where you play against the board, effectively trying to get the operative to guess all the locations within seven turns.

The spymaster role requires a lot of thought. The game can easily be won or lost on a single word. Understanding how your other team members may interpret a particular image is extremely important. You must also ensure you choose your word carefully, as many words can have more than one meaning. For example, they could say 'see' or 'sea'. These two words would most likely relate to completely different cards, but the operatives will not know which version of the word is being used.

As the operative, identifying the pictures that relate to the word given can be equally, if not more, difficult. They will need to start thinking about how their teammate thinks. The pressure is on to identify every location before the opponents reveal all of theirs.

In a standard game, you'll be playing across two teams. Head to head. One spymaster and any number of operatives in each team. Being an operative, you need to think outside the box and look at every image in great detail. Read between the lines. The spymaster needs to see links between pictures that they know their co-spies will also see. Balancing that between your team is a delicate act, as the images are random and comprise many elements!

When you're the spymaster of a team, you need to be consistent. If we went elaborate for one clue and blunt for the next, the operatives went mad! Consistency is key. Sure, when you go for the obvious ones you'll get easy, correct responses, but then going technical straight after will cause issues.

Where the problems appear is in the head to head element. Especially when playing with teams of more than two people. Showing cracks in your teamwork will cause tension that can be exploited. It's all fun and games until you dispute a card and it turns out to be the assassin! Suddenly someone is at fault and the team splits. It has to stay fun. The competition is all well and good, but you can't go for the jugular!

In the two-player variant of Codenames Pictures, one player takes on the role of the spymaster with the other player becoming the operative. You need to work together efficiently to beat the board, as the board is never wrong.

The spymaster needs to help the operative find the corresponding coloured locations by stating a single word and number, as in the original. They need to locate as many as possible in each turn. After each turn, the spymaster will reveal one of the opposing colour's locations on the board.

This is where the chase is on! You need to discover your colour locations before the opponents are all revealed. It's a race against time! Naturally, you should win (should!) but there is a scoring chart to determine how efficient a spy you are. Nailing it before any opposing spies are played causes MI6 to ring you up there and then. 1-3 isn't to be sniffed at either. Anything less isn't as bad but not noteworthy!

In the two-player variant, as long as the team can work together and understand each other's thought processes, this game can be won! However, one simple slip up, and the assassin may be revealed! Your game will end in defeat! Or, at best, the opposing team finds one of their locations and you put them at the advantage.

The game itself has a simple concept that is easy to understand and accessible to a wide age range. Although it plays quickly, it still gives an element of tension that will keep you engaged and focused. It also brings competition to the table, and you will want rematch after rematch to find out who the real winner is! It's easy to teach and will appeal to both non-gamers and gamers alike.

The pictures themselves are perfect! They bring together multiple elements; some are creepy, some funny, and some are extremely weird. There may be a little downtime during this game while teammates or opponents are thinking. However, this can give you a chance to think about your own plan of action - so it's not all bad!

We thoroughly enjoy playing Codenames Pictures with gamers and non-gamers alike. It's one we've cracked out at family gatherings and have had a tonne of laughs with! There is no greater feeling than being a better spy than your parents. So, don a sharp suit, rendezvous at "Natural 3," and grab a shaken drink. Never stirred.

Editors note: This blog was originally published on August 15th, 2019. Updated on January 18th, 2022 to improve the information available.