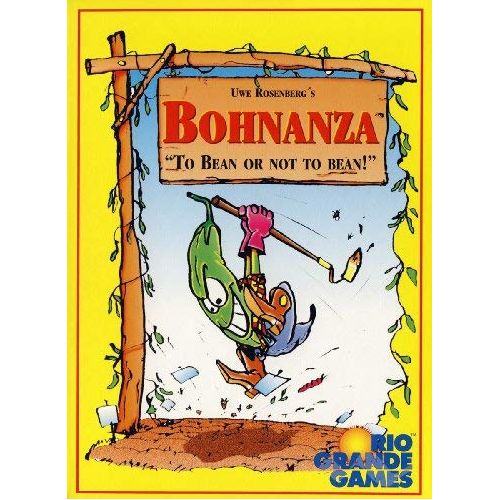 you could earn 1549 victory points

you could earn 1549 victory points

Add to Wishlist
Bohnanza is a set collection, hand management card game all about trading and planting beans. It might come as a surprise to discover that Bohnanza was designed by Uwe Rosenberg (10 years before he created Agricola, Le Havre, Caverna and many other ‘bigger’ games). However, despite being overshadowed by those weighty titles, this card game still provides clever, fun mechanics an…
Read More
Category Board Games Tags Bohnanza, Great For Two, Rio Grande Games, Uwe Rosenberg SKU ZBG-RGG155 Availability 5+ in stock
Share this
80%

Bohnanza is a set collection, hand management card game all about trading and planting beans. It might come as a surprise to discover that Bohnanza was designed by Uwe Rosenberg (10 years before he created Agricola, Le Havre, Caverna and many other ‘bigger’ games). However, despite being overshadowed by those weighty titles, this card game still provides clever, fun mechanics and punches above its weight for a game that has been around for more than 20 years. Bohnanza’s deck consists of many different types of bean. Players (up to seven) will be aiming to plant beans of the same type in one of their two ‘bean fields’, and eventually harvest them to earn coins. Once the deck has been exhausted three times, the player with the most money wins. On your turn you have to play a bean card from your hand into one of your two available bean fields. Only beans of the same type can be played into one field, so if you have to play a different (third) type of bean other than those in your fields on your turn, you must first harvest one of your fields. Players can purchase a vital third bean field for three coins, giving them more flexibility. Bean types earn you differing amounts of coins, depending on how many beans you are harvesting at the time (some beans are rarer than others, and therefore worth more coins for having fewer of them, and vice versa for more common beans). On the reverse of every card is one coin. Harvesting your beans for coins? Simply flip over the appropriate value of cards of those harvested beans to keep for yourself, while the others return to the discard pile. This means, therefore, that there are now less beans of your just-harvested type available when the discard pile is shuffled and becomes the new deck later on. There is a really neat twist in Bohnanza, and it kicks in as soon as the initial cards have been dealt out to everyone. Players can look at but not rearrange their hand of cards. They must always play their top card, and any cards they acquire go to the back of their ‘queue’. Therefore, players need to be clever about how they ‘rearrange’ their order of cards… On your turn you can vocally offer to trade any cards in your hand with the other players. Therefore you could get rid of beans you don’t want and receive ones you do – but be careful, you could be gifting big points to other players! Of course, you may have no choice, because you might want to avoid being forced into harvesting one of your bean fields before you want to, if your next card is a type you’re not collecting! Bohnanza is an unsung hero from Uwe Rosenberg’s collection of board games. It takes strong willpower not to rearrange your hand (like you would in literally any other card game!), but that’s the brilliant thing about it. Believe us, it makes for a lot of fun when it comes to desperate trading of cards! Player Count: 2-7 Time: 45 Minutes Age: 13+

Bohnanza is a perfect example of games not being defined by their components. Nowadays, with Kickstarter tabletop games popping up left, right and centre, a greater emphasis is placed on the components that come in the box than the rules that tie everything together. It feels like most big Kickstarters are now just competitions to see who can put more in a box: more components, nicer minis, finer details, and so on.

Now, let’s look at a very simple game: Bohnanza. Here’s what you get in the box:

These cards are wonderfully illustrated, with the silliness of the artwork definitely lining up well with the silliness of the theme (imagine asking your friends to join you in a game of bean farming). Furthermore, the iconography is near perfect, as all the information you need is easy to spot despite the card art. Card quality is top notch as well, with professional playing card quality stock that would definitely survive quite a lot of use.

In Bohnanza, published by Rio Grande Games, players are bean farmers trying to make the most money. Cards in Bohnanza are beans, with a specific name and value (selling x many will yield y amount of dollars). These cards are essentially sets for players to collect, and the more you collect of a certain type of bean, the higher your payout will be once you harvest them.

Rounds are quick and can be divided into a few phases - planting, revealing and trading, and drawing. Each player has two bean fields at the start of the game,with an option to buy a third field later on. Each field can hold one type of bean. 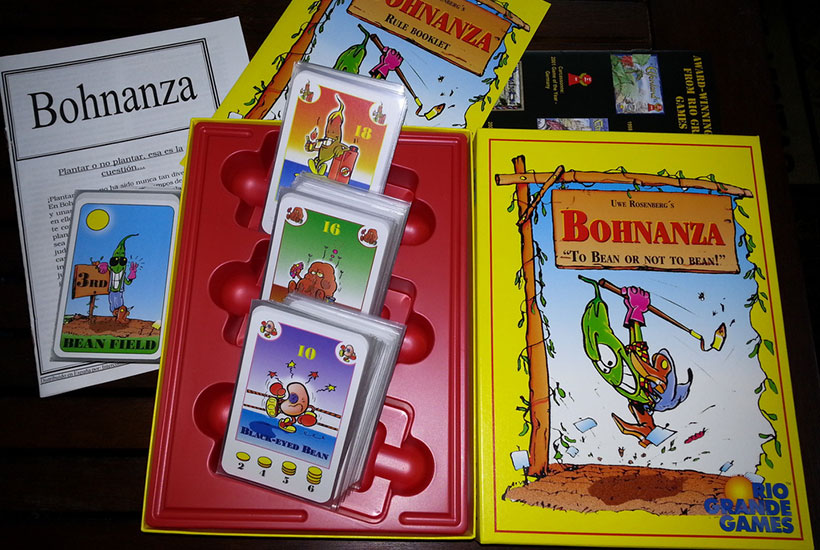 A crucial part of Bohnanza is that players can’t change the order of their cards in their hand, which means that your hand is essentially a conveyor belt of beans, some good and some bad. This brings me to the best part of the game; trading. Players can trade or even donate beans to other players. In this way, you’re trying to get rid of beans you don’t want before you have to plant them, creating an interesting dynamic where giving away cards cards does help yourself, but you don’t really want to give them too much.

This is what separates Bohnanza from other games centred around trading; trading generally benefits both parties, and the winner of the game is generally the player who manages to make small gains over several trades. The free-form trading allows players to really get creative in how they negotiate, as players are constrained by trying to convince others to help them while also trying to cull unwanted cards from their hand. The game can be extremely cut-throat, or it can be really lighthearted. It really depends on your group.

Sometimes it might be worthwhile to deny someone else a card they want, even if it means having to sell off a set that hasn’t been completed. Since there are different amounts of beans in the deck, beans are valued differently.

Rarer beans are harder to come by, but they only require smaller sets to reward you for collecting them. But since multiple people may be vying for the same bean, the competition for that type of bean may go up, and someone who manages to get some of them can capitalise on the competition between collectors. The perceived value of certain beans fluctuates dramatically as some beans get scarcer and scarcer, and players find themselves dealing with a very fickle bean stock market (beanstalk market? Yes. I’m rolling with this).

That being said, much like most games with a negotiating and trading mechanic involved, the mileage you get from Bohnanza really depends on your group. If they love the back and forth negotiations and deal-making, this game will be a hit. If the group is generally quieter and more reserved, Bohnanza can definitely fall flat. 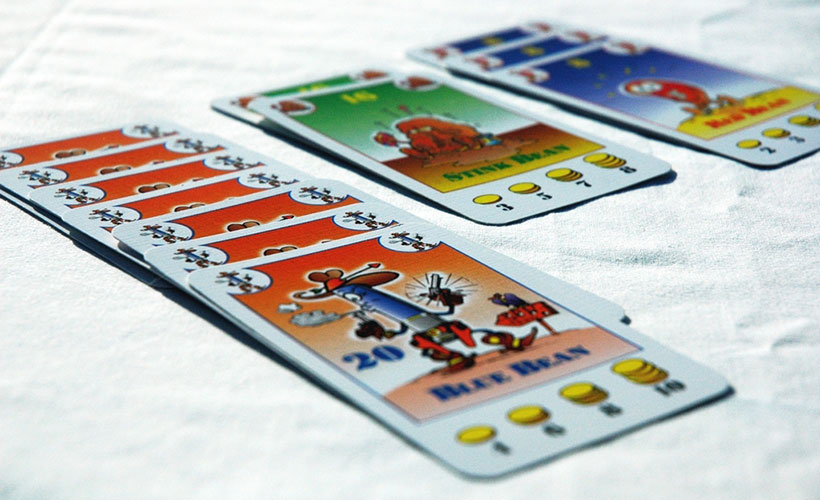 Another key issue with Bohnanza is that it tends to run pretty long. The game ends once you’ve run through the deck between two to three times depending on the player count. This turns a light game about trading beans into a rather drawn out affair. Depending on how well players have taken to the game, it may feel like it’s overstayed its welcome. However, if players are fully engrossed, the rounds can fly by, and these games sometimes feel like they ended a little too early.

A huge plus for Bohnanza is that it can hold up to seven players, although it does have a sweet spot of around five or six. Like many games with large player counts, there’s always the concern of downtime. This is kept to a minimum though. Even though it isn’t your turn, you’re engaged, paying attention to what happens on other players’ turns – what are they planting? Do they want to trade? How many garden beans are left in the deck?

Bohnanza is a fantastic game. It definitely lacks the component wow factor most games have nowadays, but for a small deck of cards that can easily fit in a backpack, it really packs a punch. There’s a lot of game in this small box, and for just over ten pounds, it’s a steal.