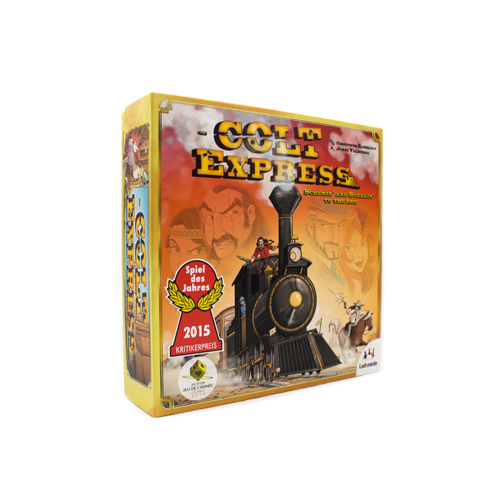 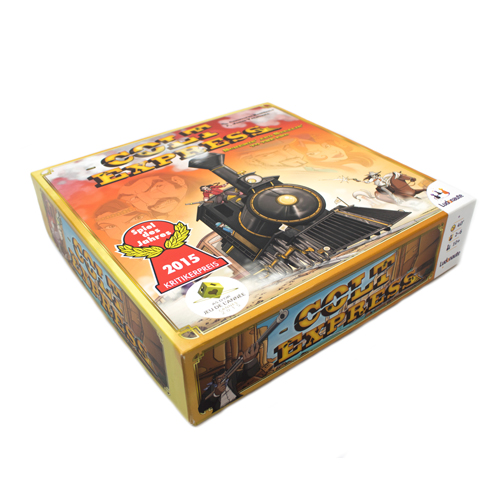 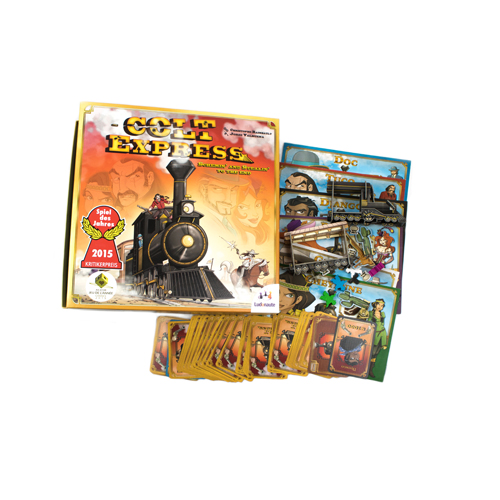 Colt Express is a card-driven, action/movement programming board game that looks like a famous scene straight out of a classic Wild West movie. Here players are rival, caricatured bandits on board a locomotive, attempting to become the richest outlaw during a good old-fashioned train robbery.

There’s no board in Colt Express – instead, the action takes place within physical 3-D train carriages that sit on the table. They look delightful and get players excited straight away (we estimate 10 seconds before you hear the first ‘Yee-haw!’). But these are not just a gimmick from Ludonaute – instead, they quite literally set the scene.

A variety of loot, in the form of $250-$500 purses and $500 gems, is placed within the carriages, and the honourable Marshal Samuel Ford, the one honest man on board, starts in the locomotive car. He’s guarding a briefcase worth an eye-watering $1,000. The bandits – with asymmetrical player powers – start in the caboose, and they have five rounds to scheme and steal as much of this loot as possible.

Each player has a deck of ten cards, with actions that range from:

• Floor Change (onto the roof or down into a carriage).
• Moving (along one carriage or across multiple carriages if you’re on the roof).
• Shooting (a rival bandit and giving them a useless bullet card, which clogs up their deck for the next round).
• Punching (a rival bandit into an adjacent carriage and causing them to drop a piece of loot).
• Robbery (picking up a piece of loot in your current carriage);
• Moving the Marshal (who can also shoot bandits if they’re in the same carriage).

Players deal themselves six cards. One at a time they can play an action card into the common deck; sometimes they’ll have to play them face-up for all to see and memorise, sometimes face-down. Once a set number of cards have been played – these differ, round to round – they are then activated in chronological order, which is when the madness begins… Bullets, fistfights and the dropping of loot occur all over the place, and not always the way players intended them!

Colt Express won the Spiel des Jahres award (the Family Game of the Year) in 2015, and it’s certainly a family-friendly game that players shouldn’t take too seriously. Since you can only see a percentage of the programmed actions, you need to calculate the odds of your perfect move being achievable. However, more often than not, the laughter comes when your plans go out the window and you have to suddenly adapt. If you’re a fan of other program-movement titles such as River Dragons, Robo Rally and Lords of Xidit, then Colt Express is the rootin’-tootin’ ride for you.

How many times have you watched those old style westerns where the bandits rob a train? Have you not also secretly thought “ooh that looks cool. Wish I could do that”? Well now you can courtesy of Christophe Raimbault’s Colt Express. It's 1899 and the Union Pacific Express is heading north to deliver its payroll and 47 passengers. Suddenly the train is attacked by a host of thieving bandits! You and your fellow players will take on the role of hardened bandit outlaws. Shooting, Punching and Stealing. Trying to collect all the loot you can from the train. Watch out though there is a Marshall on this train, and can you really trust your fellow bandits? Of course you can’t. They will do their best to steal more and will even steal from you given half a chance. This is a no holds barred train robbery with every bandit out for themselves. After all there is NO honour among thieves.

What do I get?

Inside your Colt Express game box you will find: 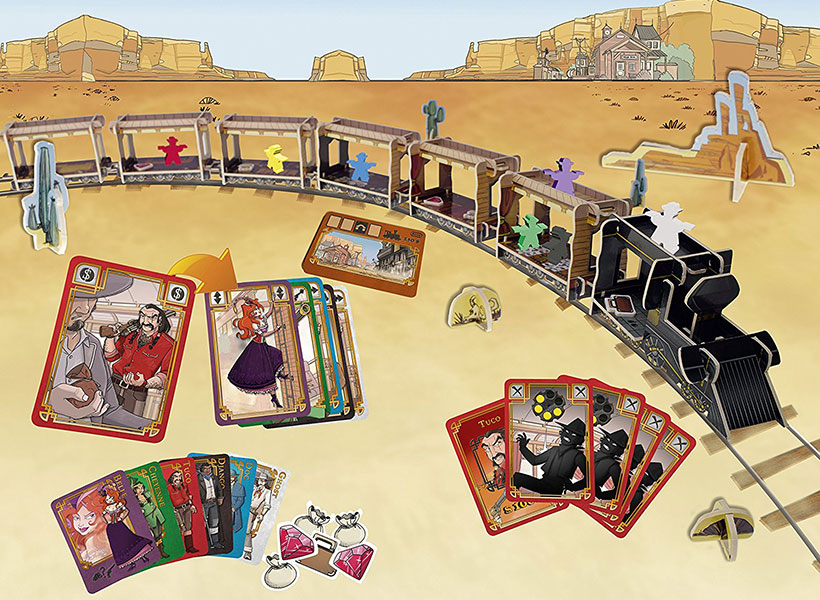 Yes you read that right. Before you can even think about playing a game of Colt Express you will first need to build Colt Express. Don’t Panic! This is nowhere near as hard as you might think. The instructions are clear and concise. No glue needed. All the parts are well designed and once assembled you will discover that the train is nice to look at, sturdy and the locomotive and carriages all connect together nicely.... choo choo. There are also some nice little extras with the terrain pieces assembling to form rocks and free standing cactus. These terrain pieces are not needed for the game but add so much theme it would be a shame to miss them out. What is nice to see is that the game box is designed in such a way that after play the carriages and locomotive store in their own individual sections. Separate from the cards and pawns. Thus protecting them from damage and storing everything nicely.

Right you have built the train cars and the locomotive. So just how do you play Colt Express then? You start off by choosing the deck of round cards based on the number of players. This will define the number of actions each round. Each player chooses their preferred character (you can random deal or draft it is your choice). It is worth noting each character has a special ability which ranges from extra cards to choose from to stronger punches to shooting further.

Once all players have their character they take a deck of bullet cards and a deck of action cards for their character. You will all draw a hand of six cards (abilities might alter this number) from your action deck. These will form your possible actions this round. The round card is turned over. You then move onto the first of the two main phases of the round.

Schemin’ → This first phase is like pre-programming your bandit to perform a set series of actions. All players, in turn order, will select a card from their hand to place in a central pile (usually face up). Yes this will allow others to see what actions you are planning. You will also see what they are planning. The number of cards played is determined by the round card. Once the correct number of cards has been played the central action pile is turned over. This moves you onto the second of the main phases.

Stealin’ → In this phase you will get to see your best laid master-plan go completely wrong with hilarious results. The top card from the central action pile is revealed and the relevant character takes the action revealed. These will consist of:

All actions in Colt Express are obligatory and must be performed if possible.

Then all players collect their deck of action cards along with any bullet cards they have been given (not their own) and shuffles them together. They deal themselves a new hand of six, face down cards. A new round card is revealed and you begin again.

Once the train station card is revealed it signifies the end of the hold-up. Most loot wins, with a nice $1000 bounty to those trigger happy enough to unload all their bullets.

Bullet cards can really cause you problems. This is because whenever you draw one as one of your six cards it is effectively a dead action. This gives you less cards to choose from, making life much more difficult. So as you can see getting shot too often is really bad for your wealth. If your draw is particularly bad you can mitigate it a little by spending an action to draw three new cards. In 2-3 player games you probably wont get too many bullet holes in you. At 5-6 player numbers however those bullets will be flying around the carriages. You have been warned.

This is the moment when Colt Express is either a bullet to your heart or leaves you feeling robbed. If you like to plan ahead, calculate your every move, deduct your opponent's plan and out manoeuvre them to predict the final outcome, you will find yourself on the wrong train. Yes there is strategy in Colt Express but not in the “long game” sense, but much more in the immediate adapt and think on your feet sense of the word. No plan is fool proof in this game. Invariably you will not be where you thought you would. Oh you can try to plan alright. “I will move here, punch him, steal that, jump onto the roof”. Then a rival moves the marshal all of a sudden you on the roof. “Oh my! I will run along the roof, swing my arms to stay warm (it is not a punch honest), inspect the roof, drop down into a carriage”. Usually cards are played face-up and you can get a general feel for what is going to happen and try to plan accordingly. Sometimes they are face down or two together or the order reversed. Think less of it as strategy and more like trying to find order in chaos.

My Thoughts on Colt Express

Colt Express is FUN it is as simple as that. We are talking light, fast, laugh out loud, screw you, take that, shoot him, punch him type fun. The visual appeal is top notch you set up a 3D train on the table with cactus and rocks all around, bandits and a marshal. You will find yourself surrounded by interested people wanting to give it a try. Chaos will ensue as nobody does what anyone else thinks they will. You will find yourself shooting at thin air and punching at nothing. When you do hit someone or steal some treasure you will not be able to stop the “Yeah take that” from escaping from your lips. Do what you think will be the best move, and figure out how to best use it when that move is resolved. Oh and did I mention it uses a 3D train model. If I can stop grinning at the thought of another game just for a moment, there are some flaws. Picking up loot tokens can be fiddly especially if you have larger fingers and knocking pieces flying can and will happen. The random chaos that ensues during a game will be off-putting for the strategy purists (bah humbug). If the train had been made as a flat board the game would have lost a lot of its appeal, as it is the visual aspect that really sells this to gamers.

Colt Express is a game that soars high or falls flat depending entirely on the mindset of those playing.

Disclaimer: I purchased my own copy of Colt Express in order to write my review. This in no way affected the review above.