Add to Basket
Find out more about our blog & how to become a member of the blogging team by clicking here
Aug 10, 2021 Board Games, Reviews Comments Off on Ancient Civilisations of the Inner Sea Review

Caesar stands atop the Great Pyramid of Rome and surveys his empire. As far as the eye can see, from Mauritania in the East to Phoenica in the West, the lands surrounding the Mediterranean Sea are his.

Roman culture had spread along the trade routes, sowing seeds of unrest in the local populace.  Where necessary, sudden violence and overwhelming force had been employed to loot cities reluctant to come into the Imperial fold. Even the Barbarian hordes had proved useful as both an offensive and defensive tactic.

Until, finally, Egypt, Minos, Carthage, even Troy had succumbed to Rome’s influence.

And now, all the Mare Internum was his.

No, not quite all.

A small pocket of resistance remains in one corner of Gaul. The time has come to unleash the Legions’ latest weapons…famine, flood, plague and…Massive Volcanoes

A Scheme of Time and Tide

Ancient Civilisations of the Inner Sea (ACIS), from GMT games, is a historically themed, although not necessarily historically accurate, strategy game for 1-6 players.

Through the course of up to four epochs, civilizations will ebb and flow, expanding and contracting and expanding again as time, tide and scheming take their inevitable toll.

Players will first choose a faction based upon one of the well-known classical civilisations that called the Mediterranean region home.

Then, using coloured wooden disks to represent… almost everything, players expand their civilisation.  Moving into new unclaimed lands or infiltrating a neighbouring civilisation. The early Camps become Settlements that grow into Cities.

A tug of war will follow as players bolster their own civilisation and create havoc for a neighbour by playing cards. Cards representing cultural events such as the use of trading routes and advancing technology. Other cards are the natural cataclysms of famine, flood and plague. Yet more cards are uncultured hordes of barbarians attacking from all compass points.

During this period of jostling for supremacy Wonders can be built to give a unique effect to the owning civilization, usually in the form of additional disks. Disks that act as towns and villages, the armies and navies, the merchants and spiritual leaders of your civilisation.

Wooden disks are also mercenary forces called into play during a period of Competition; that tumultuous time where two civilisations vie for the same space. They are money and barbarian peoples. But they are not Wonders. Wonders are wooden blocks.

A period of peace follows. Of tidying up and putting away. Gathering your thoughts and assessing your progress (or lack thereof). It’s a time for reflection, a time to…eye up the next piece of land you are going to conquer using a Millennial Earthquake!

You may have guessed that the components in Ancient Civilisations of the Inner Sea are primarily multi-purposed wooden disks and cards. And a map. A large, lovely looking, twin sectioned map.

But no, we have good quality wooden disks, blocks, and cards. Everything in ACIS is functional and necessary. What a refreshing change…it means ACIS is a game that stands, or falls, on the merits of its gameplay.

The question is: does it?

At its core, Ancient Civilisations is savage. A bare knuckle, throw sand in their face and kick them when they are down fistfight of a game.

Each round players have the potential to sweep an opponent off the board through combat or cripple a strategy for multiple turns through blocking tactics.  It’s so strangely satisfying to inflict an environmental disaster on your opponent and see their civilization shrivel. Battering it down to a bare reflection of its previous glory.

Argh, someone has done it to you. Hopes and dreams of an empire crushed beneath the boot heels of barbarian hordes.

Then events move in your favour and your influence can spread through merchants and religion until BAM! You hit them with civil war and insurrection.

At least, it is if you are playing with people who share your opinion on take that games.

The single biggest issue with Ancient Civilisations of the Inner Sea is that it tries too hard to mould a riotous take that game into something it isn't.

The rule structure for ACIS allows for,  even encourages, a wide array of play styles. There is a basic game plus multiple historical scenarios. There is guidance on how to make the game more of a sandbox. Want to be peaceful with a focus on scoring points? No problem! Even more aggressive and wargame-like with a focus on conquest. Yup, that’s here too.

The game itself can be scaled from a relatively short 90 minutes to a sprawling all day epic. One to six players can be accommodated. The map can be narrowed or extended. Additional rules are added or omitted at will. Victory can be your choice of any number of things. A first-past-the-post race to 10 or 20 or 100 points, the conclusion of a set number of epochs, an arbitrary time limit…

The degree to which players are free to configure ACIS is impressive, however, this freedom has a price. If you are looking for a historical or civilisation building game this certainly has the theme yet it lacks the detail and historical accuracy of those genres. Anyone interested in complex strategic wargames may well find the game too random, the ever present barbarian hordes too disruptive. Those that prefer multiplayer solitaire non-confrontational games will find that this does not distinguish itself from any one of a hundred other Eurogames. And even with the gloves on and dressed in appropriate safety wear, ACIS can hit hard due to the nature of the cards.

This can create issues in a diverse group. In my own game group there are wargamers, fans of heavy economic puzzles and lovers of party games with high social interaction. In this mixed context, ACIS fell flat.

Out of the box it was too chaotic, too in-your-face, too historical and not historical enough, too focused on points yet needed more ways to score . It needed more combat, needed to be longer and yet was far too long for such a violent game. It split my group like no-other game. Those of us that liked it loved it, however, others are reluctant to try it again.

The key to getting the most out ACIS is to take the time to explore the available options. Success lies in discovering a play style that suits your group and rolling with it. With the right group of like minded gamers this will put you on the road to many hours of  fun, however, it's a difficult journey if two thirds of the group don’t want a second play.

For those that find the initial game or two alienates their group, or who simply don’t have a group, ACIS has a very well served solo game. Be aware it’s fiddly and suffers from all the same sandbox related issues as the multiplayer while losing the elements of a shared ‘take that’ experience.

However, persevere and you’ll find a flexible and thoroughly enjoyable solo system that can be adapted to suit your time, complexity and playstyle needs. That in itself is quite an accomplishment and makes ACIS worthy of your time.

Underneath its historical civilisation building veneer, Ancient Civilisations is a very competitive and often chaotic beat 'em up.

Gamers who take the time to explore ACIS's many configurations will find a thoroughly enjoyable take that experience.

However, by attempting to appeal to a broader audience, ACIS risks disappointing those that expecting something more. 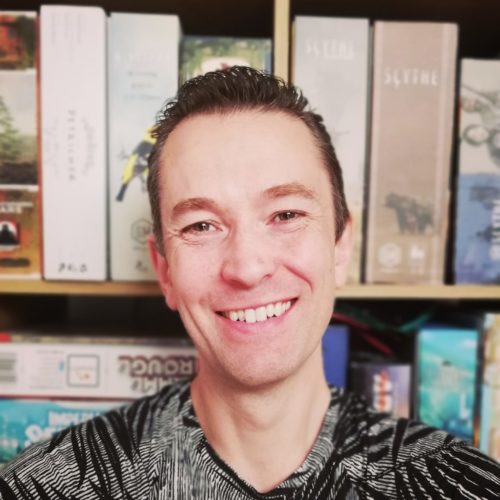 Add to Basket
Board GamesStrategyWar Games