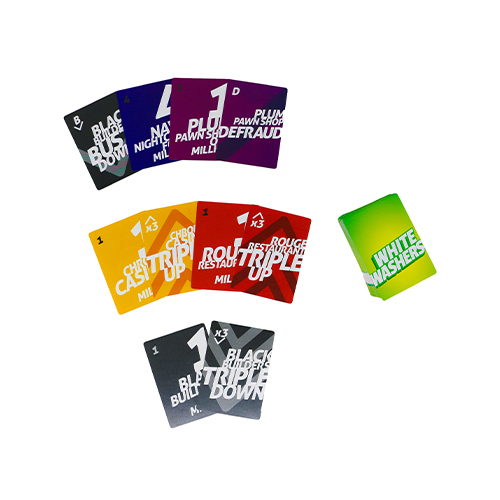 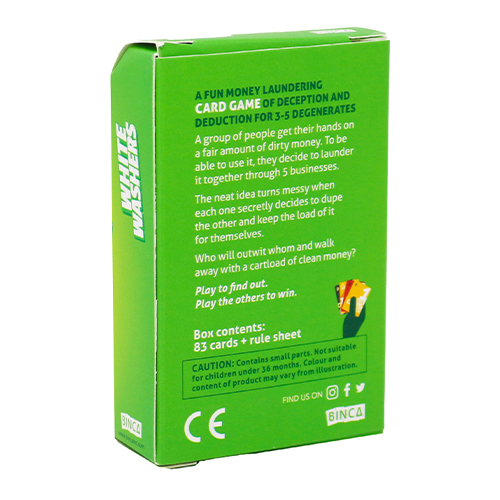 you could earn 149 victory points

you could earn 149 victory points

The Money Laundering Card Game. Clean up your money but not your act in this game of trick & bluff Whitewashers is a game of deduction and deception for 2-5 players. In this game, players try to convert black money into white money by playing cards from their hand to the other players. The aim of the game is to trick the others into losing money while becoming the most successfu…
Read More
Category Board Games Tags Red Knight Games, Sale SKU ZRKG-WW-TR1 Availability 5+ in stock
Share this
55%

The Money Laundering Card Game. Clean up your money but not your act in this game of trick & bluff

Whitewashers is a game of deduction and deception for 2-5 players. In this game, players try to convert black money into white money by playing cards from their hand to the other players.

The aim of the game is to trick the others into losing money while becoming the most successful legit businessman of the lot.

Have you ever fancied a walk on the wild side? A chance to do a few shady deals? Perhaps make a little tax-free profit? Cash in hand, under the table? But how do you keep this from the HMRC? The answer is money laundering. Before you go to contact the HMRC and reveal my tax arrangements, let me explain about White Washers.

White Washers is a light hearted bluffing game for three to five players, based loosely on this theme. You play a character trying to build up five legitimate businesses and passing on dodgy money. This is another venture from BINCA games, a small husband and wife team, who for six years have been offering games in India and the UK. They have four other titles, Fletter, Fletter Fuse, Spill and Quicket.

Players each have a hand of seven cards. These cards represent five businesses. The cards are either of a value or perform an action. The object of White Washers is to build a tableau of these five businesses in front of you. The player whose portfolio is the most valuable once all the cards are played, is the winner. White Washers consists of just one deck of 80 cards, with three reference cards as an aide memoire. The five businesses are represented by 16 cards each. They may be either a value, or perform an action for that business. This game is all about trying to corral your opponents into accepting your dirty money and allowing you to keep the more valuable cards.

Players have a hand of seven cards. These will be a selection of number cards (cash) or action cards; triples doubles bust and defraud. Unfortunately, you may not play cards directly into your own business portfolio. Instead you must aim to play a card so that it is actually is placed by another player into your tableau. On your turn you take one card and offer it face down in front of any other player. You will give them selective information about this card to allow them to make a semi informed decision whether to accept it. You need either to state:

With this limited information a player can decide to accept that card. It then becomes part of their portfolio and money laundering has begun. They might be concerned that you are "pulling a fast one" and could refuse your helpful card. The card then comes back to you and your business interests.

Occasionally an action card cannot be placed legally in your tableau. Here this card is turned to allow all to see its action and it is returned to your hand.

The number cards either create a profit or loss. They are numbered - 4 million (a big loss) to + 5 million (a fantastic profit). Players should try to fill their business ventures with plenty of profitable cards.

The action cards can affect the profits and losses. Triple up and double up cards will influence the card above them. The down cards affect the next card played in the portfolio. These doubling and tripling effects can be overruled if a "bust" card is laid on top of them.

Finally, the defraud card can be very helpful. It is like a Trojan horse. If accepted by a player then the top card of that colour is stolen and given to that player. However, if the player smells a rat and they decline the defraud card, they can steal the uppermost card of the first player.

Once a card is played from the hand another is drawn from the deck. Once the deck is finished everyone plays a final round and the value of the portfolios are calculated. Most players find that one or two businesses have performed well but there is often one that can seriously dent the profits.

White Washers is an extremely portable card game. It is able to fit in your pocket but will be best played at a table. The bright green box is shaped just like an old-fashioned laundry detergent box. This fits the theme nicely of washing dirty money to make it clean.

The cards are of excellent leaning quality. They have a lovely feel to them. The colours and printing go to the edge of the cards. The font is large, clear to read, with no confusion of the cards meaning. Within a few turns it is easy to grasp how the action cards influence the card above and below.

The game states it is for three to five players. We have played with just two and it works just as well. This could broaden its appeal to more gamers.

White Washers depends on being able to bluff or double bluff in offering bad (or good) cards to an opponent. For this reason, it is really only playable with teenagers or adults. It is easy to read my youngest child's thoughts. She almost invariably smirks or giggles when trying to pass a bad card. Part of being a parent is not taking a game too seriously so that you are willing to accept poor cards, purely for the sake of playing the game.

The first half of the game is luck driven to a degree. There are few clues as to whether a card is good or bad. This binary decision does feel like a game of chance. However, when offering cards, one can at least influence some gameplay. It is important to choose cards and select an opponent where it would be a win-win for you. For example, if an opponent accepts the card it might cancel their high scoring card. If they decline it, then a negative card in your portfolio might be wiped clean. This situation does not happen too often during a game.

In the latter half, with many cards from each business in play, one can start to "play the probabilities". At least now you can rationalise whether to acccept or decline cards.

During play there is a little tension and anxiety when receiving a card. Certainly there is a sense of relief when a card is accepted and is actually of benefit to you. Similarly, one does have a wry smile when your double or triple bluff pays off.

As a family we have found a four-player game typically takes 20 or 25 minutes. The final scores and results will all be changed by the final few cards. The outcome never is certain.

As a concept the game is unusual. For me it is not a theme that personally excites me. The bluffing is quite fun. I have found that one game at a time is sufficient, so the game is suitable at the start of a games evening just to get things going. This is a lightweight card game with an element of luck affecting play.

The issue I have is that you know that every other player is always looking to devalue your portfolio. Every offer is treated with scepticism. The fundamental mistrust of others is not often a feature in many games. This can give a slightly negative vibe. There seems to be a slightly unpleasant taste. Perversely, one is happy to play games to win by doing well with positive outcomes, but to win by undermining other's stock is not something that I relish during gameplay. That is why I have not had great feelings on replaying this game. Others may not experience such pangs of conscience, but for me I prefer a positive feeling from games.

Games with deduction and bluffing usually need several players to work. Avalon for example is best with six or seven but with White Washers just two or three players can try to read each other's intentions. The game is light and does seem to have limited immediate replay-ability. White Washers is best considered as a filler game to start an evening. It is good for its price and will be played occasionally due to its unusual theme and if you enjoy cards and bluffing this might be a game to consider.