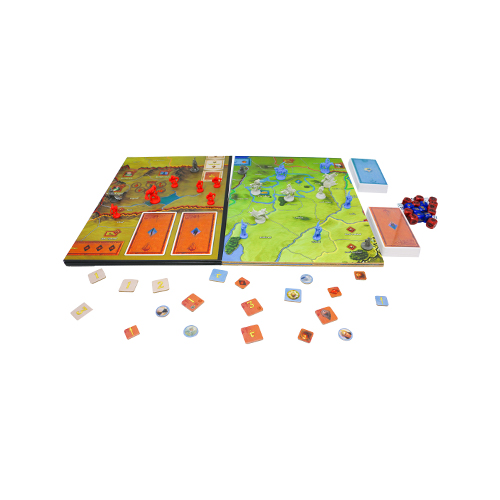 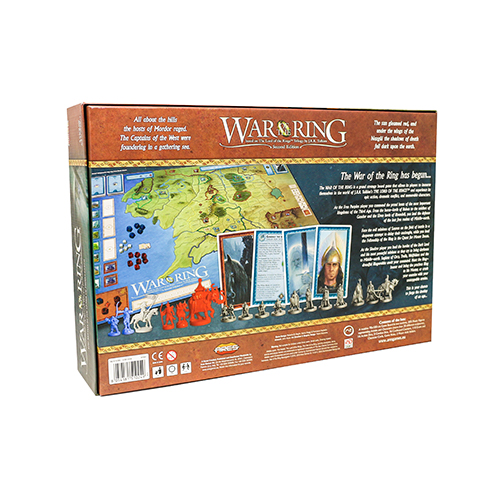 War of the Ring 2nd Edition

you could earn 6679 victory points

you could earn 6679 victory points

In War of the Ring, one player takes control of the Free Peoples, the other player controls Shadow Armies. Initially, the Free People Nations are reluctant to take arms against Sauron, so they must be attacked by Sauron or persuaded by Gandalf or other Companions, before they start to fight properly: this is represented by the Political Track, which shows if a Nation is ready to fig…
Read More
Category Board Games Tags Ares Games, BGG Golden Geek, BGG Top 100, Dice Tower, Golden Pear, Lord of the Rings, War of the Ring, Zatu Platinum Award SKU ZBG-AREWOTR001 Availability 3+ in stock
Share
Share this
90%

In War of the Ring, one player takes control of the Free Peoples, the other player controls Shadow Armies. Initially, the Free People Nations are reluctant to take arms against Sauron, so they must be attacked by Sauron or persuaded by Gandalf or other Companions, before they start to fight properly: this is represented by the Political Track, which shows if a Nation is ready to fight in the War of the Ring or not.

The game can be won by a military victory, if Sauron conquers a certain number of Free People cities or vice versa. But the true hope of the Free Peoples lies with the quest of the Ringbearer: while the armies clash across Middle Earth, the Fellowship of the Ring is trying to get secretly to Mount Doom to destroy the One Ring. Sauron is not aware of the real intention of his enemies but is looking across Middle Earth for the precious Ring, so that the Fellowship is going to face numerous dangers, represented by the rules of The Hunt for the Ring.  The Companions however can spur the Free Peoples to the fight against Sauron, so the Free People player must balance the need to protect the Ringbearer from harm, against the attempt to raise a proper defense against the armies of the Shadow, so that they do not overrun Middle Earth before the Ringbearer completes his quest.

War of the Ring is an area control strategy war game based on the events of Lord of the Rings. The game plays best with two players, on one side is the Free Peoples, on the other are the forces of Shadow.

It uses Action Dice,  which allow players to do things like move armies, play event cards, move specific characters and so on. There are two possible routes to victory; the first is the military route which comes down to conquest and capture of enemy cities and strongholds. The second is the ring, if the ring gets destroyed by throwing it into the cracks of Mount Doom then the player of the Free Peoples wins, if the Ringbearer fails in this quest then the player of the Shadow wins.

This game is huge in more ways than one. Firstly the board is 41 by 54 inches so you are going to need a big table. Then there are a mass of plastic figures representing military units, blue for the Free Peoples and Red for the forces of Shadow. There are also figures for the main characters and others, and four decks of character and event cards. There is a 48 page reasonably well written and illustrated rule book. War of the Ring is a complex game and after set up which can take some time, play takes somewhere in the region of three hours.

So is it worth it? In my view yes.

Why Is War Of The Ring Worth It?

The board is a beautiful depiction of Middle Earth. The character and event cards really bring the theme of the game to life, the figures are solid if nothing special, and the action dice mechanic forces players to constantly make decisions based on what actions are possible.

Combat is relatively simple, as in truth are most of the rules, there are just a lot of them. Play is true to the theme, the player of forces of Shadow is likely to start gobbling up strongholds and citadels as his armies start to rampage across the board, (although the Free Peoples may have the odd victory here and there), whilst at the same time the Shadow will be searching for the Ring.

The player of the Free Peoples has the Fellowship of the Ring and will be trying to sneak the ring into Mordor and ultimately to Mount Doom, whilst trying to mount a holding action with considerably fewer military forces.

Play is compelling and challenging, and the experience really does immerse the players in Middle Earth and bring to life various events and characters. The use of action dice means that each player has to make decisions as to which action to take depending on what face of the die is rolled. This can be things like move armies and start battles, play an event card, hunt for the ring, move the fellowship or a character in it and so on. Usually there is more than one thing which can be done with a die, so there are always decisions to take.

On the characters and the Fellowship, each character has a special ability, Gandalf the Grey for example if slain can come back into play as Gandalf the White, if Merry or Pippin die they "escape" and come back into play, and obviously Strider can become Aragorn.  Then there is the Witch King, bring him into play and laugh at your enemies, but doing so has a cost. Each of these come with their own card describing what these characters can do and an associated plastic mini figure.

In the event cards there are beings like Ents, Grima Wormtongue, Eagles, Tom Bombadil and of course a Balrog, and various items such as the Mirror of Galadriel, all of which have a direct impact on play and are true to the theme. Cards can be used in one of two ways, as events, or to help influence the outcome of a battle. Once again, there is always a decision to take.

If I have any gripes the figures representing the armies of the Free Peoples are difficult to tell apart and I'm not a great fan of bendy plastic figures - but at least they will not break. Secondly War of the Ring does take some time to set up. Lastly towards the end victory or defeat can hang on a single event or dice, it can feel tense, it can feel random, but there is strategy in avoiding the random.

War of the Ring will not be a game for everyone, I'm happy to spend three hours playing an area control strategic war game, especially one this good. Equally I am happy to go through a 48 page rule book, and spend time learning how to play.

It is not a simple game, some people might like to watch the walk through on BoardGameGeek, it explains a great deal:

I have been discussing War of the Ring second edition, obviously there was a previous edition but you'll not see it in many shops. There is also the Anniversary Edition which comes with painted figures, it's beautiful, hard to find and if found will come at a very hefty price.

Currently there are five expansions, these do things like add new characters, or new cards, and some make rule additions - Although none are essential to play.

Ultimately War of the Ring is a two player strategic war game driven by action dice and event cards, which despite the asymmetrical nature, is extremely well balanced. The 96 event cards ensure every play of War of the Ring is going to be different. The game is fairly complex because there is a lot going on, and there are a lot of rules although each rule is simple and the two sided player aid card helps a great deal.

The base of War of the Ring is a solid, challenging and not over complex, two player area control strategic war game. On this alone War of the Ring is a seriously good game. Add to this the lovely presentation and components, how well it brings to life the events and characters in Lord of the Rings and immerses the players into Middle Earth, it really is a winner.

This blog was originally published on April 4th, 2017. Updated on April 27th, 2022 to improve the information available.