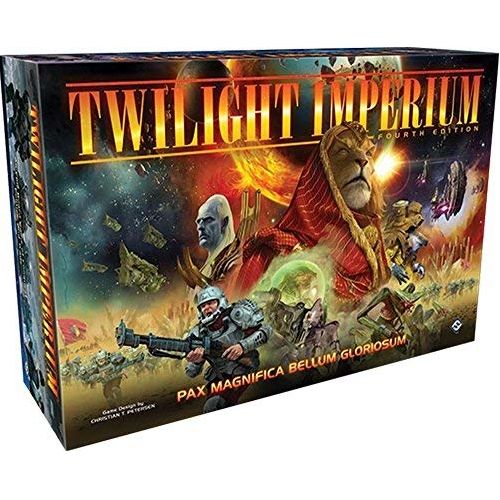 you could earn 10149 victory points

you could earn 10149 victory points

Add to Wishlist
The Lazax Empire has collapsed into the Twilight Wars, and the great races of the galaxy have retreated back to their home worlds, but now the galaxy is stirring once again and the races are looking into deep space towards the empty throne that sits on Mecatol Rex. Will the galaxy fall under the might of military conquest and be manipulated by the galactic council as a new age dawns…
Read More
Category Board Games Tags Best Sellers, BGG Top 100, Dice Tower, Fantasy Flight Games, Gold, Golden Pear, Podcast Approved, Podcast Episode 6, Twilight Imperium SKU ZBG-FFGTI07 Availability 5+ in stock
Share this
85%

The Lazax Empire has collapsed into the Twilight Wars, and the great races of the galaxy have retreated back to their home worlds, but now the galaxy is stirring once again and the races are looking into deep space towards the empty throne that sits on Mecatol Rex. Will the galaxy fall under the might of military conquest and be manipulated by the galactic council as a new age dawns? Welcome to Twilight Imperium 4th Edition!

Each player controls a race in this epic game of galactic exploration, expansion, exploitation and extermination. Command a vast ground army of infantry and Space cannons to expand your empire and exploit the resources and influence of new planets. Send out an armada of Spaceships including destroyers, cruisers, carriers, dreadnoughts, war suns under the command of your flagship to explore the galaxy and exterminate all other races!

Spend your resources to build new units and research new technology or spend your influence to manipulate and vote on laws in the Galactic Council. Each of the 17 different alien races has unique abilities and a couple of unit technologies that no other race can get. Each race is suited to a path to victory, but the only limits are those you impose on yourself.

Will you command the Federation of Sol with their orbital drop ability, the Mentak Coalition with their Ambush and Pillage abilities, the unrelenting Sardakk N'Orr or the brilliant, analytical yet fragile Universities of Jol-Nar.

Twilight Imperium 4th Edition is truly an epic game set in the far off future that incorporates space combat, ground combat, political intrigue, research, trading and out manoeuvring in every sense of the word your opponents as you all race to control Mecatol Rex and seize the crown of the fallen Lazax Empire.

Which of the greatest races shall claim the throne and lead a new empire in to the future?

With over 350 plastic military units, hundreds of different cards and hundreds of tokens this is a game for those who like things epic!

Some people like co-operative games, some people like asymmetric and others enjoy short, funny games. Then there are those folks who enjoy longer, more involved games with varying strategies and multiple ways to win.

If that sounds like you, then Twilight Imperium is likely the board game for you.

A sprawling empire building science fiction game with all the hallmarks of a 4X (Explore, Expand, Exploit, Exterminate) video game, players take on the roles of the various factions in the universe, from the militaristic Barony of Letnev, to the more commercially orientated Emirates of Hacan or one of the eight remaining factions available in the core set.

Each faction starts with a home system, several units making up their fleet and army, starting technologies and faction unique abilities. Starting setup and technology tends to be themed round the faction’s culture, and if you are interested in the lore, you can read all about it on the reverse of the faction card.

Given the differing start up units, technologies and abilities, each faction plays differently which means that if you want to breathe some new life into the game, simply play as someone else next time you play.

In my most recent games I have played as both Barony of Letnev and the Emirates of Hacan, and I can attest that both required different styles of play.

The galaxy is built up using hex tiles dealt out to the players and then placed in turn meaning that the playing area is unique every time.

Most of the tiles are star systems with planets in them, ripe for colonisation or conquest, some are open space and some are navigation hazards that a canny player can place to good effect at setup to hinder their opponents.

Each round of play players select one of the eight available strategies. So, players wanting to upgrade their warships would probably choose Technology, whilst someone in danger of invasion might pick up Diplomacy and a third wanting to mobilise troops could choose logistics, or warfare.

These strategy cards not only give players powerful advantages in that particular area on any given turn, they also dictate the order of play, with the lowest number strategy card determining player one for that round. Players then take turns in that round to move units, attack opponents or enact their strategies. This continues until players choose to pass, having played their strategy and being unwilling or unable to move anymore units.

The primary resource of Twilight Imperium are the planets, each planet representing a production capacity and political influence.

Players can send ships, carrying troops, to uninhabited planets to colonise them to gain these bonuses, or they can invade planets already occupied by other players.

Resources are used to produce military units, as well as pay for certain things including scientific discovery.

Political influence is used when the Galactic Senate is called to session by the Political Strategy allowing new game changing laws to be passed.

The game continues until one player achieves 10 victory points, or the Imperium Rex Card is drawn from the objective deck. In the case of the game ending as a result of Imperium Rex being drawn, the winner is declared based on the player with the most victory points.

Twilight Imperium is a monster of a game, the box being twice the size I was used to expecting from Fantasy Flight, and there wasn’t a lot of wasted space in there. The core game ships with six unit sprues, made up of Troops, Fighters, Destroyers, Carriers, Cruisers, Dreadnoughts and War Suns.

The miniatures are all in one piece, which was a big plus for me as I can’t stand having to glue stuff together.  The game also comes with a massive deck of cards, for planets, political cards, objectives, action cards and technological upgrades, all of which are neatly printed and are shiny.

I suspect some folk may struggle to read the cards, as the writing is quite small. I am not entirely sure what could have been done differently. The tiles that make the game board are sturdy card, with high quality artwork used for the planets.

Perhaps my favourite thing about Twilight Imperium is the ability to progress your technology, giving your ships upgrades was a major selling point for me. I particularly liked that Cruisers could be upgraded to carry troops and move faster, or you could focus on your ground batteries extending their range to neighbouring systems.

Each card tells you what its prerequisite technologies are, so it isn’t actually too difficult to figure what you need to develop next if you have a specific goal in mind.  The largest ship in the game, the War Sun, is developed this way.

For all the things that are good about Twilight Imperium, there are a number of things that players may wish to consider. The game has a long setup and take down time, which can be mitigated if you have friends to help and you are organised with labelled bags and such.

The game itself is also quite long. The Imperium Rex card can potentially end the game early, though truth be told I have yet to see it. Arguably, the game is worth every minute spent playing it, but not everyone will have the four to six hours needed to play. And finally, as with most Fantasy Flight Games I have played, Twilight Imperium has a lot of rules, most of which are quite in depth and detailed. The only counter to that is that many important details are summarised on each faction card.

With all that said, Twilight Imperium is one of my favourite games. The ability to command a Space Empire, with accompanying Navy and Army is really appealing, and the game is more interesting than simply moving fleets about and shooting down your opponent.

Effective use of trade will allow a player to build more ships than their empire size might suggest, or help them advance technologically. Effective use of politics, including players negotiating with one another, can really change the direction of a game. And the differing setups of the factions, combined with these various factors means this game is immensely re-playable.