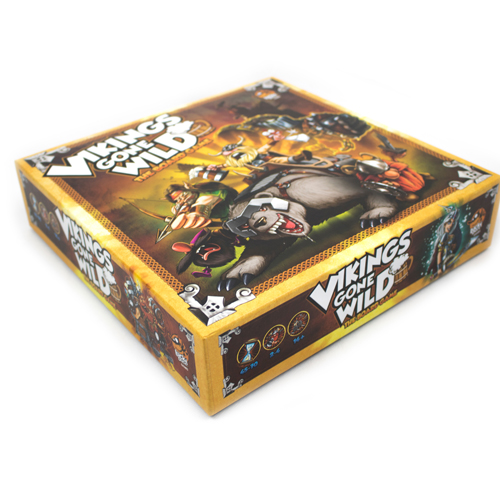 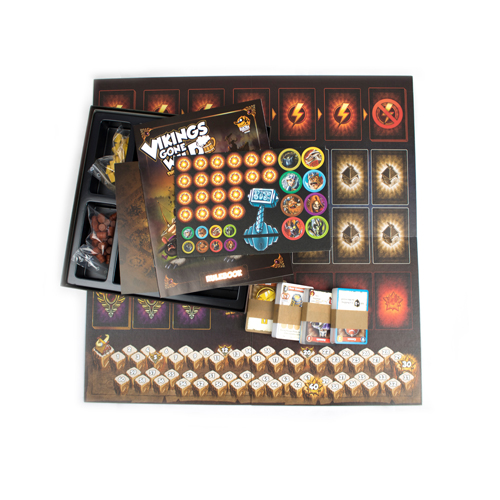 Vikings Gone Wild (The Board Game)

Pay in 3 interest-free payments on eligible purchases. Learn more
Success! We will let you know when this product is available again.
Your email address has been unsubscribed!
Your email address has been unsubscribed!
Notify me when this product is available to purchase!
This email address is already subscribed to this product!
In Vikings Gone Wild, players take the role of heads of clans fighting against each other to prove to the gods who is the best. You will gain Victory Points mainly by attacking other players, defending successfully, upgrading your Town Hall or completing missions. The game ends once a player reaches 40 or 30 Victory Points, depending on the number of players. But the final winner wi…
Read More
Category Board Games Tags 9+, Teens, Vikings Gone Wild SKU ZBG-HPLDG0001 Availability Out of stock
Share
Share this
90%

In Vikings Gone Wild, players take the role of heads of clans fighting against each other to prove to the gods who is the best.

You will gain Victory Points mainly by attacking other players, defending successfully, upgrading your Town Hall or completing missions. The game ends once a player reaches 40 or 30 Victory Points, depending on the number of players. But the final winner will be determined once the 24 bonus points have been attributed.

During each turn, you play the cards in your hand to buy units or defense towers, erect buildings and attack other players. You will have to find the right balance between investing in your economy (buildings, specials cards) and growing your army!

Vikings Gone Wild is based on the app game which has the same name and allows you to play as a Viking leader of a village! The game is published by Lucky Duck Games and raised an impressive $236,949 on its Kickstarter campaign, with 2750 backers.

In Vikings Gone Wild you must attack, defend and build in a specific way in order to score victory points.

The artwork for Vikings Gone Wild is very well done as is clearly influenced by the app. It reminds me very much of the cartoon Asterisk, my kids adore the artwork and it always gets a wow from them.

The game is a deck-builder, buying cards to increase the amount you have and to increase what you can do, and like all deck builders there are a large array of cards to buy from. The key difference here is that once you play a card it's not discarded, instead it's kept until the round ends as it can still influence what happens in that round.

The base game is very easy to learn and my eldest daughter loved it, and could play without any help after a few turns. There are several phases each player must do on there go and these consist of:

After this you then need to discard your cards and redraw up to your hand limit.

We have played this game several times and it has been very well received however it is a bit on the light side and can get very samey, very quickly. Due to this we quickly tried out the expansions.

Its A Kind Of Magic

This was the first expansion we tried and it added spells into the game. This didn't really change the game much and as the spells took the place of other cards that are better it seemed kind of pointless.

The new end game bonus and mission cards were very good though and added a much needed change. Overall this is not a must buy but it does add a different flavour and changes things up enough to make it a good purchase.

This was the next expansion we tried and I have to say that once you have used this expansion you will most likely not go back to the base game. It adds even more end game scoring cards, missions and buildings but the new units are where its at.

The inclusion of walls adds a new strategy to defence and attack, as do the inclusion of flying monsters (these negate the wall defence bonus). As a frequent gamer I don't know if I would now go back to the base game as this is a lot more fun and difficult. There is also a 2v2 mode which will appeal to some however my group don't like working together!!!

A brilliantly designed, colourful game with good mechanics let down by what seems a lack of options. This is however made up by the expansions. Guild wars is a must and really shows where this game can go if they work out how to include a game mode where all expansions are played together. They should maybe look at creating a new expansion that builds on what Guild wars has done to make it appeal more to the serious gamer.

The game is easily one of my favourite deck builders when using the Guild Wars expansion I just hope it can go up one more notch as it really does have the potential to be a very good game. I just feel its trying to appeal to casual gamers and children to much.

That being said its a solid deck builder and with the inclusion of the expansions will keep most entertained for a while.

This blog was originally published on March 6th, 2017. Updated on April 27th, 2022 to improve the information available.