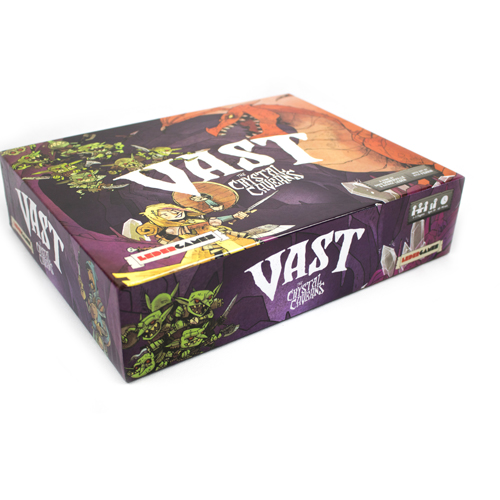 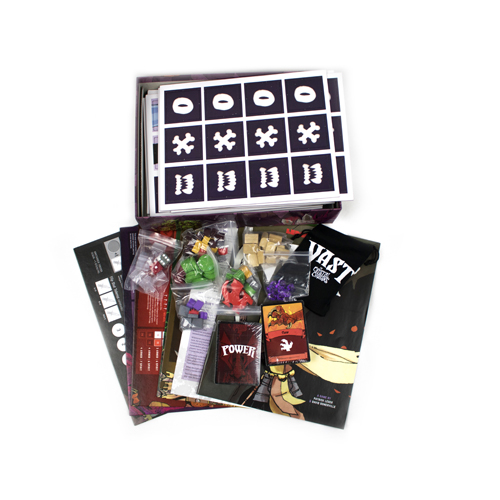 Pay in 3 interest-free payments on eligible purchases. Learn more
Success! We will let you know when this product is available again.
Your email address has been unsubscribed!
Your email address has been unsubscribed!
Notify me when this product is available to purchase!
This email address is already subscribed to this product!
Enter the world of Vast: The Crystal Caverns! Vast takes you and your friends into the torch light of a classic cave-crawling adventure, built on the concept of total asymmetry. Gone are days of the merry band of travelers fighting off evil. In Vast, you will become part of a new legend… Any part you wish! Play as the classic, daring Knight, the chaotic Goblin horde, the colos…
Read More
Category Board Games Tag Leder Games SKU ZBG-LEDVACC01 Availability Out of stock
Share
Share this
90%

Enter the world of Vast: The Crystal Caverns!

Vast takes you and your friends into the torch light of a classic cave-crawling adventure, built on the concept of total asymmetry. Gone are days of the merry band of travelers fighting off evil. In Vast, you will become part of a new legend... Any part you wish!

Play as the classic, daring Knight, the chaotic Goblin horde, the colossal, greedy Dragon, or even the Cave itself — powerful, brooding, and intent on crushing the living things that dare to disturb its gloomy depths. Each role has its own powers, pieces, and paths to victory...and there can be only one winner.

As the ultimate asymmetric board game, Vast: The Crystal Caverns provides a limitless adventure, playable again and again as you and your friends explore the four different roles in different combinations. Play one-on-one in a race to the death between the Knight and the Goblins, or add in the Dragon and the Cave for deeper and more epic experiences, different every time.

I was watching a YouTube discussion last night about area control games, and after only a short while the chat turned into quite an animated disagreement about what the actual definition of the category was in the first place. We can get very hung up on mechanisms in games and what our favourites are etc, however, once in a while a game comes along that challenges much of what we think is known about the way games (should in our opinion) work.

One of my favourite aspects of gameplay is asymmetry. That can be when two opposing players take two very different roles (such as in Descent or more recently, In Between) or where co-operative teams have different abilities they can call upon (such as in Pandemic or Escape The Dark Castle) to aid the team through differing challenges.

Vast: The Crystal Caverns, from Leder Games, bends this principle to new and highly innovative limits with the players actually taking on different aspects of the game and game environment itself.

At its core, Vast: The Crystal Caverns is really just a dungeon crawler, though quite abstracted from what one might normally expect from that description. Players get to choose whether to take on the valiant mantle of the Knight, vanquishing foes and slightly less valiantly looting the joint for all its worth; or trying something a little different. In the base game, there are five roles: The Knight, The Goblins, The Thief, The Dragon and The Cave - yes - The Cave. One player can elect to play as the Cave itself in Vast, and it's ingenious from the get-go.

Even the rule book is deeply unconventional. The core rule book really runs to only about a page or two of general rules, set-up and glossary, but after that every player has their own separate rule book for their specific role. Players are given completely different components to play the game with and totally different player boards that initially look like they've all come from totally different games. The beauty and elegance of the design of this game and how clever the balance and gameplay is starts to become apparent from this moment forward.

Every game needs a win condition - it's the one thing I always check first having played numerous games over the years where I neglected to do so and completely scuppered my game. Vast, as you might be starting to suspect, is unconventional in this regard as well. There are in fact, several win conditions:

So basically, everyone playing has their own completely different agenda from everyone else. This makes the game hugely interesting but also a real challenge to keep track of around the table but all progress information is open so there should be no sudden surprises.

The Cave is laid out progressively, but anyone not playing the Cave needs to bear in mind that this is actually part of The Cave's strategy and a careful eye needs to be kept on how quickly it grows. Once the Cave has placed all its tiles, the collapse begins and once five crystal tiles have collapsed, the Cave has won.

The Knight is probably the most familiar role in the game both thematically and mechanically. The Knight gains 'grit' which allows her to level up and gain new equipment and abilities. Grit is gained by exploring, smashing crystals, declining treasure and even completing side quests! On our first game, the Knight gained grit very quickly and won against the Cave and Dragon quite easily. It was difficult to tell whether some of this was to do with the apparent familiarity or if our friend had just grasped the Knight role quicker than the rest of us. Subsequent plays have not confirmed this.

There isn't space in this short review to go through all the roles in depth, but what is staggering about Vast: The Crystal Caverns is that even though everyone is essentially playing with their own set of rules, mechanics and goals, the game still retains a massive amount of player interaction. There are too many games where you can end up essentially playing a bunch of solo games with little going on between players, but in Vast, all the players are reliant on each other.

The Cave's progress allows the Knight & Thief to find more treasure. The Knight's progress feeds into the Goblins' end game and the Dragon and Goblins can affect the Cave's progress quite dramatically. There are countless other interactions going on in the game, and the very handy quick tips sheet goes through a lot of these other interactions in case players might miss them. It also has a handy summary of rules you might have forgotten or missed (this is a favourite set ion of any rule book for me).

Thoughts on Vast: The Crystal Caverns

The quality of Vast: The Crystal Caverns screams labour of love. Patrick Leder and David Somerville have created an astonishing game experience. The quality of the components, player boards, shaped chunky meeples (or the adorable standees that are also included) rule sheets and player aids are all stunning. It should have been an unholy mess of text to make this game at all playable, but within 20 minutes of getting this to the table, we were all fairly comfy with our own roles and the general rules (of which there are surprisingly few) and playing away happily.

This is probably not the game to bring to a new group or even to a weekly time limited gaming group. It might even be handy to give out photocopies of the rule sheets one week and come back the next to play, with everyone having had a chance to read through the basics. Not essential by any means, but might be handy. There's very little downtime in this game and its pace cracks on refreshingly well. As for replay-ability, roles can be swapped around, different combos tried and there are a myriad of variant suggestions in the rule book that will keep you playing for a good long while.

If you do run out of options, then I can also highly recommend the new expansions (which is actually two boxes, a minis expansion and a gameplay expansion), The Fearsome Foes, which introduces some very interesting new roles, some of which interact more with the base roles rather than as new standalone roles. This can only increase the player interaction even further, and fundamentally, who doesn't want a Nightmare Unicorn in any game?

The new expansion also has a companion box (sold separately) which introduces some beautiful minis for all the base roles and those in the expansion. It's a bit of a bargain at a shade over £20 too. They are all a good size, not just token 15-28mm minis, and will look lovely painted up. They are a great reflection of the already beautiful artwork in the game as well.

Overall, I cannot recommend this game enough. It will not be for everybody as I know some folks really don't get on with asymmetry in games, but Vast: The Crystal Caverns is worth a try as it is done so elegantly and intelligently.

It looks beautiful, will give you many happy replays and is probably one of the most innovative games you will play for a long time.