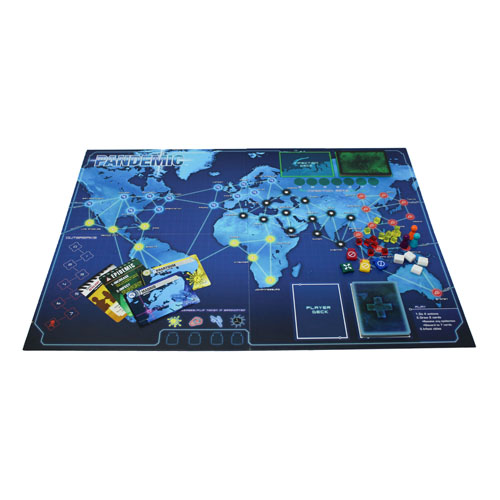 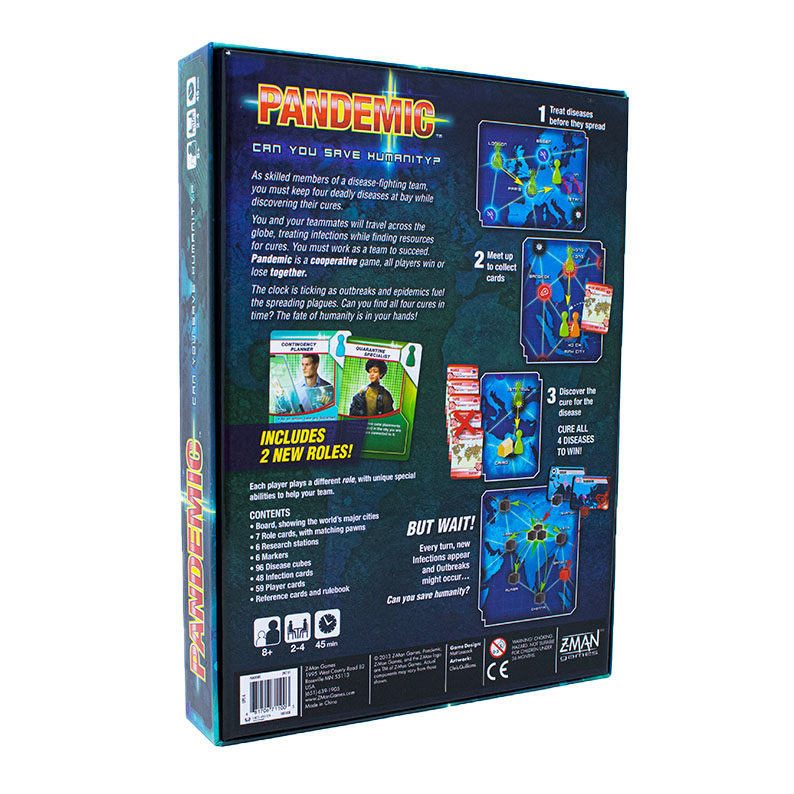 you could earn 2489 victory points

you could earn 2489 victory points

In Pandemic, a game for 2-4 players, you will take on the role of one of seven different, disease fighting specialists, each with a unique skill which will come in handy when tackling four of the most deadly diseases ever known to man. The goal of Pandemic, from Z-Man Games, is relatively simple. Work together to find the cure for each of the four diseases before time runs out. Seem…
Read More
Category Board Games Tags Best Sellers, BGG Golden Geek, BGG Top 100, Dice Tower, Golden Pear, Great For Two, Great Gifts, Pandemic, Podcast Approved, Sale, Value For Money, Z-Man Games, Zatu Platinum Award SKU ZBG-ZMG71100 Availability 3+ in stock
Share
Share this
96%

In Pandemic, a game for 2-4 players, you will take on the role of one of seven different disease-fighting specialists, each with a unique skill that will come in handy when tackling four of the most deadly diseases ever known to man.

The goal of Pandemic, from Z-Man Games, is relatively simple. Work together to find the cure for each of the four diseases before time runs out. Seems simple? Well, not so fast soldier!

Pandemic is a co-operative game where you must work together to identify and carry out the best strategy to getting the cures, while also fighting off the disease, managing its spread and keeping track of which cities could be infected next. Use your specialist's strengths and skills to your advantage and stop the disease from taking over.

Each turn, a player can utilise a multitude of actions, from moving to different cities, tackling the disease head-on, building vital research centres or finding that precious cure by discarding five disease cards.

As the game progresses, the spread of the disease gets larger and the chance of an Epidemic occurring increases. Perhaps the most revolutionary element of this game is the Epidemic mechanic. Draw an epidemic card from the pile and you will infect a completely new city with three cubes, putting it on the verge of an outbreak. The infection rate increases and the disease intensifies, meaning the previously drawn “Infect City” cards are shuffled and put back on top of the deck, laying in wait to be drawn and infect at a greater rate.

If you and your team manage to keep on top of the ever-growing infection and manage to find those all-important cures, you can officially call yourselves disease control specialists. Fail, however, and you will find the world at the mercy of all four diseases, with little else that can be done to save humanity.

Pandemic is an absolute staple, a go-to game for any avid board game player and an essential for any board game collection! The co-operative element paired with the theme makes it an enjoyable, fast-paced game that can be played by all!

The great reviews of Pandemic spread like an epidemic, can a game really be that good? Anybody who has read my blog on the stigma of board gaming and how I got involved will know that this was the first game I played and like other gateway games, Splendor for one, it still has a place in my collection but gets played less and less as I try out more niche games and my tastes change.

The key to getting most out of Pandemic is to immerse yourself into the theme and really look at it as you try to save the world. The premise is that the world is suddenly hit by disease and you play as one of the people tasked with curing said diseases.

There are four diseases to fight against in Pandemic, with each one being represented by a different coloured cube, and making use of one of the seven role's special skills is essential for victory.

Pandemic is a co-operative game and plays up to four people, with each player choosing a specific a role to play in the game. These roles are as follows:

On your turn you're allowed to take four actions. You can select any combination of these actions and you can do an action more than once. The actions you can take include....

You have to work as a team using the above actions and the roles special ability’s to cure all the diseases. The game is very well balanced and by adding or removing the epidemic cards, the game can have varying difficulties which adds replay value as does playing as different roles.

The best way to get most out of this game is to not let any one player take command and work as a team equally. The quality of the components is very good and I love the little plastic disease cubes. The game board is very easy to understand and there is a place for everything so you don’t need a large space to play.

The player’s pawns (or meeples) are a let-down and don’t sit right within the theme for me and this is the only area I can think lets the game down component wise. The cards are of decent quality and even with all the shuffling show no sign of wear. The cards have all different artwork and make sorting the decks out simple.

The game ebbs and flows nicely and one minute you can be close to winning and the next you will have a fight on your hands. You must think ahead and if a lot of one colour cube is very prominent then working as a team to get rid of them is necessary. After a few turns of failing you soon get to understand what you must do to improve and you suddenly start thinking in advance and the games moves along as you get immersed in the world.

This past week I was extremely lucky to speak with board game designer Matt Leacock - the man behind the the hugely successful Pandemic board game franchise. Pandemic Legacy: Season One has been sitting pretty at the top of the BoardGameGeek Top 100 chart since its release and with Season Two now on the way, the excitement is beginning to build.

Alongside the Pandemic series, Matt has also designed other top game such as Forbidden Island and the Thunderbirds board game.

Have a read below to see what Matt had to say to say about Pandemic, future projects and the design process.

I wanted to try designing a co-operative game of my own after playing Reiner Knizia's Lord of the Rings game back in 2000. I was surprised how engaging co-operative games could be - how a "cardboard enemy" could cause us so much excitement and stress. Prior to that, I'd assumed co-op games were harmless educational experiences. I also really liked how, win or lose, my wife and I always had a good experience playing together because the games weren't confrontational.

Pandemics were in the news at that time and it struck me that viruses would make a great unfeeling, scary enemy for the players to battle against. I was also interested in modelling a game with emergent behaviours: creating a simple rule set that could generate interesting play experiences and wild chain reactions.

I never get tired of seeing it on the shelf at the local Target. My favourite thing, however, is when people tell me that Pandemic introduced them into the hobby and got them hooked.

Rob and I knew we were on to something good when we developed it - we watched as our play-testers would binge play two, three, sometimes four games in a row - but we had no idea that the game would be as popular as it turned out to be.

I can give you a few details at this point: The game takes place 71 years after Season 1. A terrible plague has wiped out much of humanity and the remaining cities are supplied with antivirals by floating "havens" on the sea. As players you must venture out into the world to keep cities in supply, but soon you must venture into the unknown in order to find out what happened to your world and to complete objectives.

I can also tell you that owning or playing Pandemic Legacy: Season 1 isn't required. (Season 2 is a fully standalone game, linked by its story line.)

I have about a half dozen other games in various stages of development. Now that I'm working full time on games, I'm able to design about four to six products a year, ranging from full-blown games to smaller add-ons or expansions. Expect to see more products in the Pandemic line, as well as a few other surprises.

Start with the fundamentals: have a good development process that involves plenty of prototyping, experimentation, and testing. Test with a diverse set of players. Blind test and iterate to ensure your game is easy to learn.

For co-operative games, I try to come up with a novel antagonist, made up of a simple rule set, that generates complex problems that are easy to understand but hard to resolve in any one "best" way. Coming up with those cardboard bad guys is one of my favourite activities because it's so challenging. Don't be afraid of experimenting with weird, crazy ideas when you start out. If you don't, you run the risk of being derivative.

When you run a play-test session - especially for a co-operative game - watch and listen to your testers carefully. Don't rely too much on self report, e.g: "that was fun."

Look to see what engages the players physically and emotionally (are they leaning in? are their conversations animated?) and chase that.

I'm not sure! I think if I could easily identify a new project that I was excited about, I would have started on it by now. And I've enjoyed collaborating with people who have been near-complete strangers when we began.

The types of games I enjoy designing most are those that appeal to both casual players and gamers alike - gateway games - so I tend to look for opportunities to design those above others.