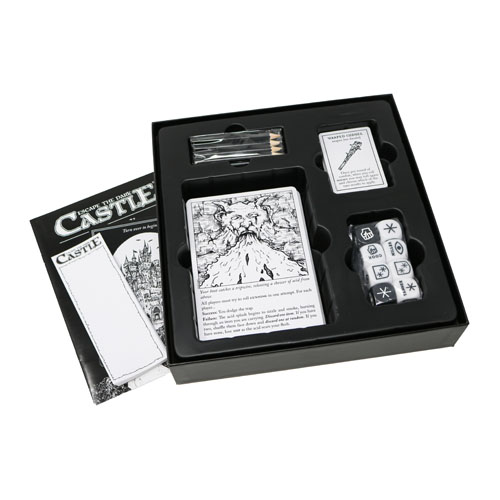 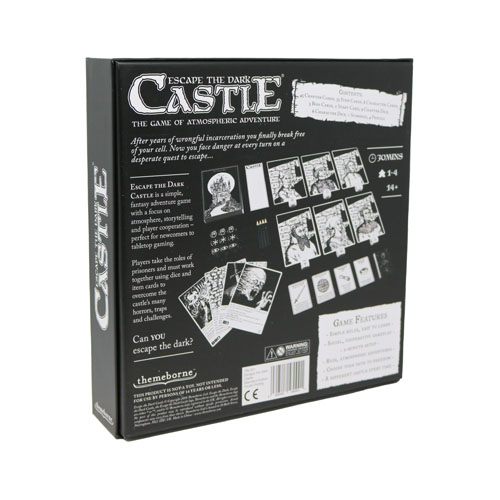 Escape the Dark Castle is a casual, cooperative game of retro-atmospheric adventure. Players take on the roles of prisoners, wrongfully incarcerated in the depths of The Dark Castle. Whether it’s the Abbot, the Tailor or the Cook, each prisoner is represented by a character card and a custom character dice showing that prisoner’s unique endowment of Might, Cunning and Wi…
Read More
Category Board Games Tags Best Sellers, Escape the Dark Castle, Podcast Approved, Themeborne Ltd. SKU ZBG-THETBL001 Availability Restock Expected
Share
Share this
89%

Escape the Dark Castle is a casual, cooperative game of retro-atmospheric adventure.

Players take on the roles of prisoners, wrongfully incarcerated in the depths of The Dark Castle. Whether it's the Abbot, the Tailor or the Cook, each prisoner is represented by a character card and a custom character dice showing that prisoner's unique endowment of Might, Cunning and Wisdom  the game's three traits.

Embarking on a desperate quest to escape, the players must work together to overcome the castle's many horrors, traps, and challenges - each of which is represented by an over-sized chapter card. 15 of these chapter cards are drawn at random from a larger deck to create a unique castle at the beginning of each game.

Gameplay involves one player revealing a new chapter card each turn, in a motion like turning a page of a storybook. There is no turn order. Instead, players decide as a group who will turn the next chapter card, and there are often grisly consequences for the one that does. When a card is turned, the next chamber or passageway into which the prisoners have stumbled is revealed.

Once revealed, the chapter card will explain the situation facing the group and what must be done to get through it. In the style of choose-your-path adventures, most chapters offer the group a choice about how to proceed. Bribe the drunken guards or attack them? Charge the beast or lure it out? Steal from the kitchen stores or keep moving?

Each chapter is a unique mini-game and a variety of mechanics are required to complete them, from push-your-luck dice rolling to the playing of item cards collected along the way that bolster players tactical abilities.
When the players choose to enter (or fail to avoid) combat, all players roll simultaneously to make an attack against the enemy. They need to collectively muster the right combination of Might, Cunning and Wisdom to defeat the foe in question, or risk taking damage.

The goal of the game is for the group to complete every chapter in the castle deck, and then defeat the final boss. To win, they must keep every member of the team alive - if any player is killed the game ends immediately.

Another day has passed, another day stuck in this dirty, wet, foul smelling cell goes by in the Dark Castle. You look around you to see mice scurrying about, each running between bits of bread left on the plates by yourself and your fellow prisoners.. The only light streaming from the small window coming from moon no longer obscured by the cloud cover.. but then one of your fellow prisoners has managed to get a manacle off after months of planning, your escape is near.. As you finally break free of your cell, you find an old wooden chest in an adjoining small stone room… ‘Draw an Item card per player now’, and that is when your adventure, if you will, starts as you try to find your way out of the foreboding Dark Castle, where you have been incarcerated for years.

The creators at Themeborne have created a retro adventure game, just like the old choose your adventure books, or like the game show Knightmare, where decisions are made as you go about your adventure for good or for worse.

I never thought I’d come across anything like this again, the books and Knightmare are very much part of my growing up period, so when I came across Escape The Dark Castle back in June 2017, at UKGE, I had to back them on Kickstarter, and quite frankly I have not been disappointed.

Setting Up Escape the Dark Castle

Escape The Dark Castle is made up of four basic things; large cards for the adventure, small cards for items, dice to determine an outcome, paper and a pencil for keeping a record of your health points (HP). That is all it is....nothing more, nothing less.

Set-up is simple, with up to four gamers selecting a character from the six available: the Tanner, Smith, Tailor, Miller, Abbot or Cook. Each character comes with their own unique attributes (Might, Cunning and Wisdom).

Once you have chosen your character,you need to find the white die that corresponds to that character and set them both aside. The white dice will have  the symbols for the three attributes inscribed on it, some with shields to help defend or protect you as you go.

Next, take the 53 large chapter cards and randomly select 15 of them as this will be your journey through the dark castle, with the final boss card being randomly selected from the five bosses on offer.

That’s it, you are ready to go on an adventure!! I say adventure, it's more an escape from the clutches of the evil overlord...

So how does the gameplay for Escape the Dark Castle work? Well before you start, the number of escapees in the game will depend on the HPs you are going to start with, but for this purpose let’s say you are a full compliment, so each character will start with 12 HP (more HP is given to games with less players involved).

Each game starts with the same opening card, the card that describes your escape from the cell, and with that you will collect your first item card. Now the thing about the item cards, and remember you have just escaped, is that you can only use two hands as of course you have no pockets. This means that in most cases you will only ever have two items being carried, unless you decide to carry something that requires both hands, like a double axe!

Escape The Dark Castle thankfully allows you to put items down to use an item you may pick up in the future (for instance food). You can move items around your team of cellmates, or even decide enough is enough you don’t need that item anyway and leave it behind.

After you have read the opening card, you turn the first chapter card, and the person to do that will be determined by you and your fellow players. The reason you have to determine who goes first is because whoever turns it over, will have to read the card out aloud to set the scene and in some cases that card may only affect the person who turned it, or it may affect the person who turned it first before affecting everyone else, for example a combat phase..

So combat, well that is something else, because remember I said each character has a unique die, well there are nine black chapter dice as well and they are for the game itself, particularly for any characters that you may come across and have to get past.

The black die each have two of each attribute inscribed on it,  i.e. two might, two wisdom and two cunning. You see, this game ensures that your path to escaping isn’t easy, and that is done by letting you know what attributes each nasty has also. So when you go into a fight, you will have to look at the card and place the correct amount of die needed set to the attributes indicated for that character, and away you go, each of you need to roll your die to defeat the bad guy… or gal as you will find out!

So for instance if the bad guy has one might, one wisdom and two cunning, you will need to roll each of those attributes to take a black die away equal to what you roll, if the bad guy/gal still has black die left on the table then the possibility of you losing HP occurs with each chapter character card indicating what you lose when defending.

15 cards doesn’t seem a lot to get through when playing this game, but when you only have 12 HP with four gamers, or 18 HP with one or two gamers, those HP soon reduce down as you try and escape and you're hoping that the  food card turns up every time you find an item to boost your health back up again.. after all the Boss card is going to be a doozy and you are going to need all the HP you can find.. That’s if you get that far…

Escape the Dark Castle is brilliant, I can’t emphasize enough how tense the game can get as you go through those cards, sometimes you’ll get to face off with the boss, but a lot of the time you may just come up short.. mainly because one of your fellow escapees doesn’t quite make it, and unfortunately the rules say one dies all lose.. its that brutal sometimes.. so close yet so far

If you love adventure games where you have to make a choice of what to do next, then go for it.. give this a go because I don’t think you’ll be disappointed.