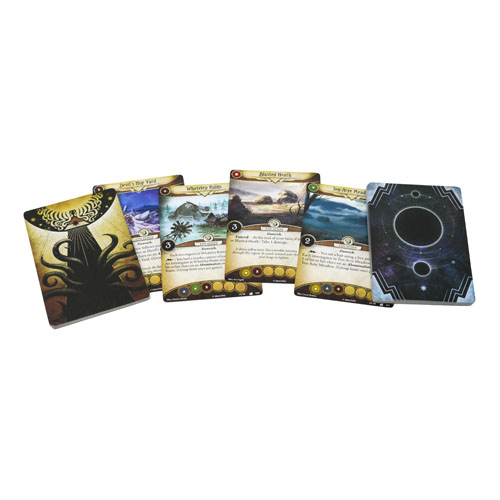 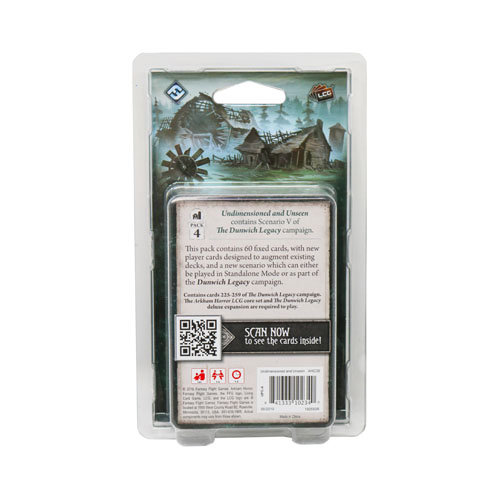 Undimensioned and Unseen is the fourth Mythos pack to come from Fantasy Flight Games in the Dunwich Legacy cycle for Arkham Horror: The Card Game. Having travelled further afield, far from the comforts of Arkham on the hunt for you fellow missing professors, you will begin to understand the things and creatures you have witnessed during your investigations! As your search continues,…
Read More
Category Board Games Tags Arkham Horror, Arkham Horror LCG, Best Sellers, Fantasy Flight Games, Living Card Game SKU ZBG-FFGAHC06 Availability 5+ in stock
Share
Share this
69%

Undimensioned and Unseen is the fourth Mythos pack to come from Fantasy Flight Games in the Dunwich Legacy cycle for Arkham Horror: The Card Game. Having travelled further afield, far from the comforts of Arkham on the hunt for you fellow missing professors, you will begin to understand the things and creatures you have witnessed during your investigations! As your search continues, you will become embroiled with the furtive cultists and their dark sacrifices, while also gathering information about the “Ancient Ones” and their rituals that to you are completely unholy. Be prepared to face further monstrous creatures that will test your arsenal and your skills as they work to end your journey….and your life! Presenting a scenario that is very much a mystery within a mystery, Undimensioned and Unseen will bring you another step closer to your ultimate goal. Don’t become too hasty however, as it is vital for you to track down as much power and knowledge as possible, aiding you in your quest to defeat various abominations that stand in your way. Time is of the essence with this investigation, all while ensuring that you remain as the hunter and don’t become the hunted! This is not a standalone product. It requires the Arkham Horror: The Card Game Core Set and The Dunwich Legacy Expansion to play. Player Count: 1-4 Time: 60-120 Minutes Age: 14+

So, you have uncovered things that you may have preferred to have left buried. Seth Bishop is attempting the rituals of his forefather and unleashing demons from another dimension on the people of Dunwich. Hell is literally breaking loose. If you were in any doubt of the severity of the threat faced, you can be deceived no longer. Either succeed in finding a means to stop Bishop and send the creatures back from whence they came or witness the destruction of the entire universe - This is Undimensioned and Unseen.

There are some interesting differences to play in Undimensioned and Unseen, even if it feels the most undercooked of the episodes in the Dunwich Cycle. The need to lure monsters to your location and attach clues to them to power up your attacks makes for an intriguing and difficult puzzle, particularly given the random way the brood monsters move (following a randomly drawn location card). Searching for the means to attack the monsters first felt a little extraneous and mundane in comparison though.

For deck building, the new cards are also a bit thin. Many sound a lot better than they are in practice. Standout cards that can be useful in a scrape include Opportunist, Quick Thinking and Survival Instinct. Overall though the new cards are too conditional, meaning they would take up space in your deck in the off chance they are drawn at the right time to help in the very set of specific circumstances where they would be useful.

While enjoyable, Undimensioned and Unseen is probably the least enjoyable of the Dunwich Cycle. ‘Well that was stupid’ was my friend’s assessment the first time we played it. It’s a shame because I think the lure and bait mechanism for defeating the monsters is a cool idea but, like the rest of the adventure, it feels a little half-baked. It also gets swamped in a hotchpotch of other ideas that never quite coalesce into a whole.

Overall, Undimensioned and Unseen feels like a filler episode before the two-part climax of the cycle. The story gets a little sidetracked and the new deckbuilding options leave little to be desired. This doesn’t mean it’s awful though. On an off day, Arkham Horror LCG can still outstrip its peers. In this respect, Undimensioned and Unseen probably suffers from comparison to the fantastic instalments that stand either side of it.