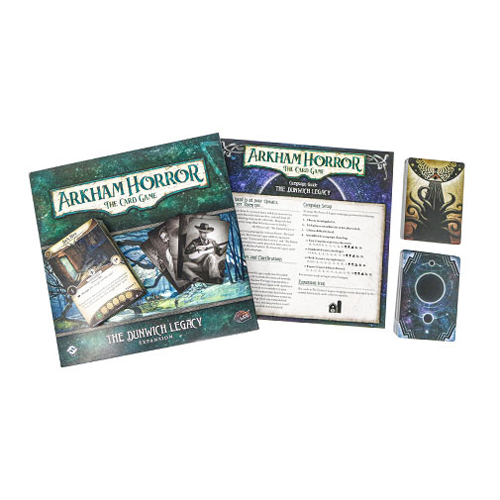 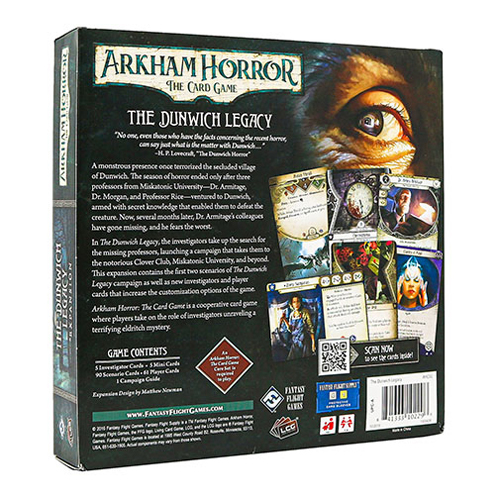 The Dunwich Legacy: Arkham Horror LCG is the first main expansion to come to the Arkham Horror Card Game, bringing with it five brand new investigators who are ready to offer their services and their skills, all ready to battle their way through Arkham itself! Not only do the new investigators bring new expertise to the field, players can also now arm them with nearly 60 new player …
Read More
Category Board Games Tags Arkham Horror, Arkham Horror LCG, Best Sellers, Fantasy Flight Games, Living Card Game SKU ZBG-FFGAHC02 Availability 5+ in stock
Share
Share this
88%

The Dunwich Legacy: Arkham Horror LCG is the first main expansion to come to the Arkham Horror Card Game, bringing with it five brand new investigators who are ready to offer their services and their skills, all ready to battle their way through Arkham itself!

Not only do the new investigators bring new expertise to the field, players can also now arm them with nearly 60 new player cards! This will allow players to create new strategies and decks to encourage further styles of play! You will need all of this ready to take on the expansions two new scenarios! These scenarios will have you coming face to face with all kinds of new terrors, from unholy abominations to backroom thugs!

The story centres around the three Miskatonic professors who travelled to Dunwich, armed with knowledge that would eventually lead to the demise of a strange and deadly creature that had been terrorising a small village. This expansions will continue that story, with your mentor Dr Armitage, one of those three professors. The story will see his colleagues disappear without a trace and it is up to you, the player, to use ever resource you have to hand to find those missing professors and protect them from whatever evil lurks around the corner!

I need to start with a bit of history. In 1987, Fantasy Flight Games released Arkham Horror the board game, a brilliant fantasy adventure cooperative game based on the works of H.P. Lovecraft. Then, in 2016, they released Arkham Horror The Card Game, a brilliantly thematic card game version of this gripping story. It was labelled as a living card game. Something new to the board game world. The difference between this and previous collectable card games is that each pack you buy to expand your game will give you a fixed group of cards. There are no more doubles, swaps, and exhausting chases for that one final card. You just buy and expand as you see fit with the exact cards you want.

The base box has the components needed to play Night of the Zealot, three chapters in the first story of this expanding universe. It also contains the basics needed to add many more expansions. The game is alive; you can keep adding more and more to it as the story progresses.

The first major expansion for the base game, after the first upgrade expansion, Return to the Night of the Zealot, is The Dunwich Legacy. This is a brilliant two-chapter expansion which takes you on new adventures in new parts of Lovecraft's fictional town of Arkham, Massachusetts, with five new investigators ready to pit their skills against the horrors ahead.

This review will be spoiler-free, so you can relax there, but of course, that does mean I am very limited in what I can say and show you. But I will do my best to give you a flavour for what you can expect from this expansion. First, I want to clear up exactly what you are getting in this box. This is the first two chapters of the Dunwich Legacy, which has eight chapters in total. The other six will need to be bought separately in standalone expansion packs. This is how most of the cycles work. There are eight chapters; two can be found in the first release with the extra cards and characters you need. The following six come in smaller single deck expansions. To set you on your way, the first one after this is The Miskatonic Museum.

You don’t have to buy them all, but by the end of these two, having (I expect) played the first three also, you will be heavily invested in the story. You don’t have to buy these next ones, but my guess is you will at least want to. So, there is a bit of a rabbit hole here, and the games get a bit of criticism for this, which I think is unfair. It’s basically people getting annoyed because the games are good.

Sure, overall, you will need to spend a fair bit for the entire six-cycle expansion, ten stand-alone expansions, four upgrade expansions, and five investigator starter sets if you get them all! And there will surely be many more to come. But you could just buy the base game and stop there. You could just buy this first expansion and stop here too. It is your choice. Ok, with that said, onto the review proper.

If you enjoyed Arkham Horror The Card Game, then I would wager you would absolutely love The Dunwich Legacy. It adds a few new mechanics to the original three chapters, and the story is incredibly engrossing. I replayed the first three chapters before I started this to remind myself of the story, but they do not continue seamlessly, and you can play with new investigators now anyway. So, this is not required. But I did enjoy playing the first three chapters again, to get back into this mysterious and terrifying world, and enjoy this part of the story again. Replaying missions is something I will get more into later.

When you open the box, you will find three decks of cards. New scenario cards for the two chapters inside. Five new playable investigators and cards suitable for them for up to two players. And new encounter cards offering new enemies, treacherous events and more. It won’t feel like there is a lot in the box but remember this is a card game. There is no board, miniatures or standees. Just pure story.

The only real question you need to ask yourself if you are considering this expansion is this: Will I enjoy this story? And the overwhelming answer to this question is, yes. Yes, you will love it!

I appreciate that if you did not enjoy the base game, you probably are not reading this. So, I am only really addressing fans of Night of the Zealot. You don’t need to have played that to play and enjoy this, but you certainly need the base game and the rule books within that box for this. I am assuming you have that and have played it, at least found it interesting and now want to see what happens next.

As I say, the story doesn’t continue directly. But it certainly doesn’t feel disjointed. It is another chapter in a new cycle after all. You are in the world of Arkham still, just in another part, this time, Dunwich, and of course now with five new investigators to play as.

When you open the campaign guide, you will be offered a brief introduction story and then a choice. Which chapter of The Dunwich Legacy will you try first? I like having this option right off the bat. It makes you feel in control and instantly drew me into this dark world again. The choice is not immaterial either. It will affect the story as you play. As you encounter certain people and events, the story will progress depending on the order in which you are attempting them. In your second chapter, the outcomes of the first one will change the course of this one. It certainly feels alive.

As such, there is a bit of replayability here. I went through the chapters twice, playing in a different order, resetting my deck for a new investigator. Perhaps I wouldn’t normally do this but I felt I should for the purposes of this review. I thought long and hard about whether I would have done this otherwise, I think maybe not. Certainly not this soon anyway. I would have been intrigued as to the other endings or paths I could have ventured on, but I think I would have just simply read the other cards and endings instead!

I mention this as replayability has to be a factor in games like this. I would suggest that most people will play both chapters once each and then move onto the next part of the story. This does make these expansions a little expensive for what you get, first in the box, and second, the amount of time you will play with them.

However, there is certainly the option to play this solo and with a partner, which would give you at least two playthroughs. This is a great way to alternate the order you play the chapters and which investigators you use, for different experiences. Or, of course, increasing the difficulty by changing what is in your chaos bag. But ultimately, I think most will play just once, which leaves me with one final question. Is this worth it?

Well, that can only be answered by you. For the excellence of the theme, story, and brilliant mechanics, I would say yes, it is 100% worth it. I would like to continue my adventures in the world of Arkham and hope to play through all the cycles. Personally,  I won’t buy them all at once, but that is not the point. I will slowly make my way through these stories. Having just finished this, I am very excited to see what happens next. I do think I will play through these chapters a few more times using the other characters whilst I wait. There is more fun to be had with these cards.

Let me phrase it this way. If you could buy a magic pizza that cost you just £10 and you could eat it over and over, would you consider choosing instead a pizza that also costs £10, but you can only eat it once? But when you do, oh my! It tastes so much better than any pizza you have had before!