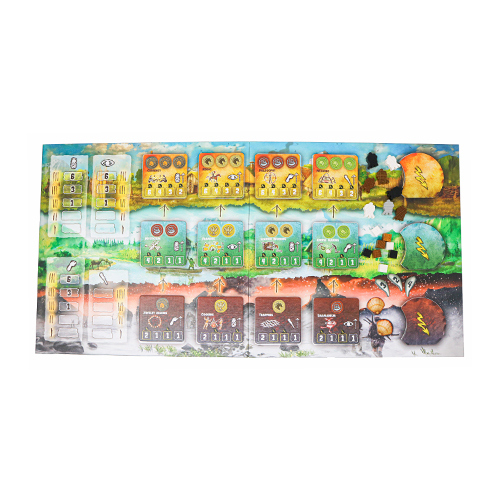 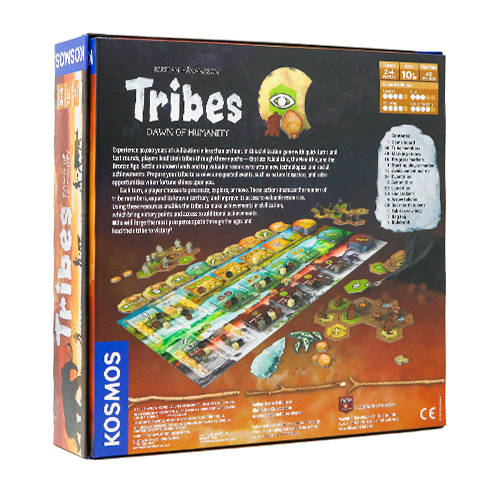 Pay in 3 interest-free payments on eligible purchases. Learn more
Success! We will let you know when this product is available again.
Your email address has been unsubscribed!
Your email address has been unsubscribed!
Notify me when this product is available to purchase!
This email address is already subscribed to this product!
Let yourself be pulled back into man’s prehistoric past and find out how well you would fare when faced with a herd of woolly mammoth! Tribes, from publishers KOSMOS, throws you back millennia, right back to the dawn of humanity. As the title suggests, Tribes is a dawn-of-civilisation action selection and management game for up to four players. The aim of the Tribes is to gain mor…
Read More
Category Board Games Tags Best Sellers, Steve Jackson (I), Thames & Kosmos SKU Z-THKO-691059 Availability Out of stock
Share
Share this
76%

Let yourself be pulled back into man’s prehistoric past and find out how well you would fare when faced with a herd of woolly mammoth! Tribes, from publishers KOSMOS, throws you back millennia, right back to the dawn of humanity. As the title suggests, Tribes is a dawn-of-civilisation action selection and management game for up to four players. The aim of the Tribes is to gain more bear teeth (in-game victory points) than any other player.
Setting up the game, players place the fifteen achievement tiles and shuffled event tiles in their outlined spaces on the board. All of Tribe’s action takes place via its action tiles, which are placed at the top of the board in a random order. These determine the actions available to players, with actions later in the sequence costing more shells to play. When a player takes an action, the relevant tile is then moved to the back of the sequence and the next player takes an action.
Starting with three land tiles each, players explore the land surrounding them, procreate, move, and quest to claim achievements. This allows players to discover new territories, add tribespeople from their pool of 15 meeples, improve their access to resources, and gain victory points and reveal and new achievement tile.
Because of the ever-changing sequence of action tiles, Tribes requires players to be highly adaptable in order to succeed. Although players win victory points by questing, they have to control a set number of certain types of land tiles. Also, as more achievement tiles are revealed, the more tiles are needed to complete them. This means players have to keep tabs on all aspects of play to ensure they don’t get left behind.
Player Count – 2-4
Age Rating – 10+
Time – 45 mins

Grab your best mammoth-hunting spear and get ready to step back through time and explore man's early years in Tribes: Dawn of Humanity. From publisher KOSMOS, Tribes sees up to four players compete to assert themselves as the dominant clan by winning the most victory points, or bear teeth tokens. Players can claim bear teeth by completing achievements. To do this, players must explore lands unknown to add hexes to the three they start with. The game is driven by the six starting action tiles which change order throughout the game, so gameplay is constantly fluid. But that's enough of that, let's go protect our tribe!

Dawn of an Era

At the start of the game, all players choose one of the four colours and take the respective tribespeople and cubes. The action tiles are placed randomly at the top of the player board and the achievement tiles are laid out in the outlined spaces. Each player then places three random land hexes and a single tribe member, and that's set up! It really is that simple. As the game goes on, players can choose one of four actions.

They can either explore and add land tiles to their domain, procreate, bringing more tribespeople into the game, move their meeples, or quest to gain victory points. Which actions you can take is dictated by the order of the action tiles, which keeps players on their toes, adapting to develop their tribe as best they can.

This delightful simplicity extends through into the gameplay itself, meaning after a quick five minute read of the game rules and you'll be good to go. The simplicity of the mechanics of the game really allows the content itself to shine, keeping gameplay light but interesting as games go on. Thanks to the ever-changing action tile order, like early man, players are having to adapt and react to succeed.

One of Tribes' strongest points is the simplicity of the gameplay. The use of symbols means that not only is the game very quick to pick up, but if you do need to look something up it takes mere seconds. The mainboard lets players track their levels in areas such as exploration or strength, all fundamental attributes for gameplay. This is also where a player can track who has completed classic caveman challenges such as trapping, cooking, and… cheese making? This makes Tribes the perfect game for strategy game newbies as a gentle interlocution to the genre. Thanks to its simple set-up and quick gameplay, any group with an hour to spare can sit down and play a game of Tribes, even if they'd never played before.

There is one issue with this simplicity in two-player setups; the game can feel a little too fleeting. Without a high player count, just as you're getting into it, the final actions are taken and you're counting victory points. This doesn't by any means spoil the game, it can just be dissatisfying when you don't have time to explore as much of Tribes as you would like. However, the action section makes up for this and is what makes Tribes so enjoyable, especially in groups of three or four. Watching the frustration on another player's face as you take an action, moving it to the back of the queue, just so they can't use it is incredible.

Walk in the Neolithic Park

One of Tribe's most striking aspects is its artwork. From the main player board to the event tiles, the art really brings this game together. The bright colours mixed with the caveman art focus set Tribes apart from other games and highlight the light and fun gameplay. It does seem that this high quality doesn't quite extend as far as the player tokens, however. When it comes to the 60 tribespeople, the design is not quite as elegant as other components.

Knowing that Tribes is about an ancient man you can make out that the meeples are burly cavemen. However, if I were to see these without context, I would not recognise them as being cavemen, or really any sort of man or that matter. Given how great the other components are, these wooden tokens just let the game down, especially given their use in the game.

Tribes: Dawn of Humanity is a super quick and incredibly simple board game that requires two minutes to set up and five minutes to learn. Thanks to its ever-changing action tiles, no two rounds of Tribes are the same, let alone two games. This is a game that excels at being a gateway for board-gaming newbies who want a simple, quick but fun way to explore the hobby. That is certainly not to say, however, that seasoned pros won't enjoy Tribes.

The quality of the artwork, slightly frumpy meeples aside, is great, as is the design. From families to hardcore gaming groups, Tribes is a fast-paced, highly variable game that anyone can get their mammoth tusks into.