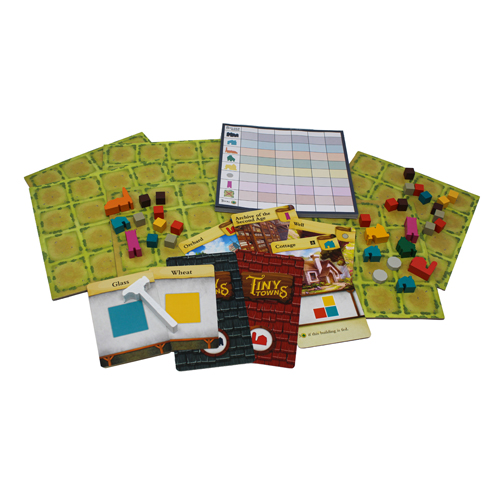 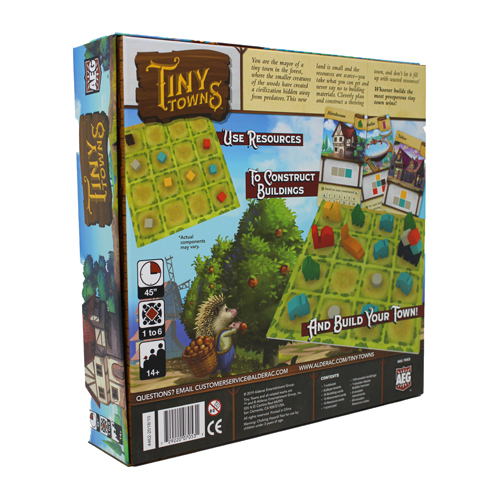 you could earn 3499 victory points

you could earn 3499 victory points

Tiny Towns is a box full of that IKEA furniture woody smell, and that’s because it has a huge array of wooden shaped buildings and coloured cubes in it. On top of that you have a couple of decks of cards and some player boards containing a 4×4 grid. Each player starts with their player board empty and a card is dealt for each type of wooden building. The cottage only has one …
Read More
Category Board Games Tags 6-8 Years, 9-11 Years, Alderac Entertainment Group, Best Sellers, Dice Tower, Exceptional Components, Fun For All the Family, Value For Money, Zatu Platinum Award SKU ZBG-AEG7053 Availability 3+ in stock
Share
Share this
90%

Tiny Towns is a box full of that IKEA furniture woody smell, and that’s because it has a huge array of wooden shaped buildings and coloured cubes in it. On top of that you have a couple of decks of cards and some player boards containing a 4x4 grid.

Each player starts with their player board empty and a card is dealt for each type of wooden building. The cottage only has one card but the rest of the buildings have four cards each with a different variant and effect on it, giving the game a huge amount of replay-ability and variety.

Each card shows what pattern of cubes you need on your board to build that building. So a cottage needs a yellow cube, a blue cube and a red cube, arranged in an ‘L’ shape. The shape can be rotated, mirrored, flipped and so on, but the colours must be in the correct order. The card also gives an effect and/or scoring stipulation that you have to meet to get points.

On your turn you will call out a colour of a cube and everyone will add that to their board. If someone has completed a building card pattern they may also build that building by removing the cubes and placing the building on one of the squares a cube was on.

Tiny Towns is a game about efficiently planning and using the space available to you. While in the early rounds players may go for the same building types, where they place them varies wildly and therefore the cubes they need start to become different. If you aren’t careful you can quickly narrow down your options and find yourself praying to the board game gods for your opponents to choose a colour your need. For a game that is quite solitaire in nature it’s surprising how dependant on the other players you will become!

For those who want a more random or difficult experience instead of players choosing cards there is a deck or 15 cards to randomly choose the cubes for you, with the exception that ever third cube is a free choice. Both ways work really well and Tiny Towns works well at all player counts.

You are the mayor of a town, a tiny town, located in a secluded forest. The town is populated with small woodland creatures hidden away from nasty predators. You don’t have a lot of space and resources are scarce, so you take what you can get and accept any building material offered to you. Plan the construction of your town careful to ensure it thrives and doesn’t get filled with wasted resources. Tiny Towns is a one to six player pattern building game designed by Peter McPherson and published by AEG.

As the mayor of your town you are collecting resources and placing them on your four by four town grid to match the patterns of various buildings. Once the resources have been collected in the correct pattern you place your building on the grid. There are various buildings that score in a variety of ways, but once resources and buildings are placed they can’t be moved so careful planning is key as any unused resources at the end of the game score negative points.

At the beginning of Tiny Towns each player is given a four by four grid that they use to place their resources on. Each player is dealt two monument cards that only they can build and are kept secret. The players select one of these monuments and put the rest back in the box. All the resources are laid out and one from each set of the building type is selected with the cottage being used in every game.

The Master Builder (active player) names one type of resource (Wood, Wheat, Brick, Glass or Stone). All players now take the named resource and place it on to an empty space on their board. Note that resources are not removed from a square once placed unless they are being used to build a building and only one resource may occupy a single square.

If any of the patterns on the building cards match a pattern on a player’s board, they may choose to build the respective building. They remove all the resources from the board that are used to build the building and return them to general supply. The relevant building being is placed on one of the spaces that was occupied by the removed resource. Once this building is placed it can’t be moved.

The Master Builder token is passed to the next player and play continues with players calling out resources, placing resources and constructing buildings. When a player can’t place any more resources or construct any buildings (due to the patterns not matching) they are out of the game and no longer participate in calling resources.

A game of Tiny Towns ends when all players have completed their towns. All unused resources are removed from the board. Players calculate the score based on the scoring requirements from the constructed buildings and deduct one point for every empty space. The player with the most points wins the game.

Tiny Towns….what can I say? Tiny on the rules, tiny on the available space, not so tiny on the choices. What a game this is. One of the things I admire in the hobby is when someone has the creative genius idea to design a game such as this.

The rules are about as straight forward as you can get. Call out a resource, place, check to see if you can build a building by matching a pattern. That’s it. The rules are covered on two pages, with most of that dedicated to examples. Yet the choices and decisions that you need to make in this are not so simple. This a real puzzler of a game.

You need to plan carefully and have an idea in your head of what buildings you are going for. Randomly throwing down cubes will be your undoing. However, the other players might be calling out resources that you don’t want/need so these need to be placed so they don’t interfere with your plans and can be utilised in other ways.

Tiny Towns is a great addition to anyone's collection who is looking for a lightweight game that has some depth of gameplay. It is quick, can play up to six players and has a lot of replay-ability.