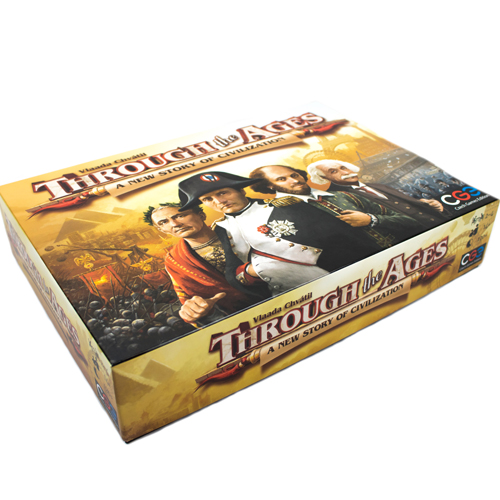 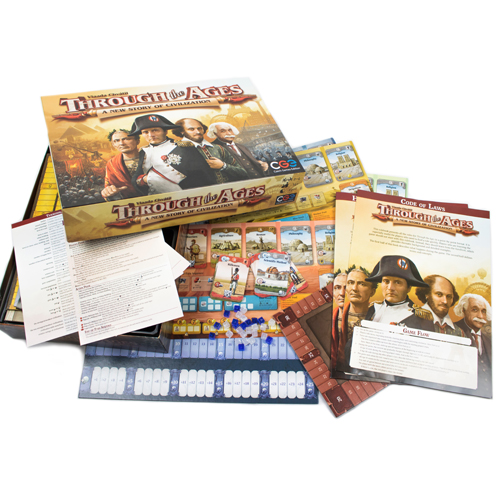 Through the Ages: A New Story of Civilization

you could earn 3656 victory points

you could earn 3656 victory points

Through the Ages, the classic civilization-building game is getting even better. This new version offers subtle improvements to the familiar mechanics and game-changing revisions to the cards, which have been rebalanced with the help of expert players. You can look forward to a fairer military system, a streamlined corruption index, and the outstanding new art. A New Story of Civili…
Read More
Category Board Games Tags BGG Top 100, Civilization, Czech Games Edition SKU ZBG-CGE00032 Availability 5+ in stock
Share
Share this

Through the Ages: A New Story of Civilization is the new edition of Through the Ages: A Story of Civilization, with many changes small and large to the game's cards over its three ages and extensive changes to how military works. Through the Ages is a civilization building game. Each player attempts to build the best civilization through careful resource management, discovering new technologies, electing the right leaders, building wonders and maintaining a strong military. Weakness in any area can be exploited by your opponents. The game takes place throughout the ages beginning in the age of antiquity and ending in the modern age. One of the primary mechanisms in Through the Ages is card drafting. Technologies, wonders, and leaders come into play and become easier to draft the longer they are in play. In order to use a technology you will need enough science to discover it, enough food to create a population to man it and enough resources (ore) to build the building to use it. While balancing the resources needed to advance your technology you also need to build a military. Military is built in the same way as civilian buildings. Players that have a weak military will be preyed upon by other players. There is no map in the game so you cannot lose territory, but players with higher military will steal resources, science, kill leaders, take population or culture. It is very difficult to win with a large military, but it is very easy to lose because of a weak one. Victory is achieved by the player whose nation has the most culture at the end of the modern age.

Given the high ratings and plaudits given to this first run, you might be wondering why a second pass was needed, but the truth is a very good game was turned into a superb game, and once you have all the mechanisms down you’ll find yourself enjoying sweeping sessions.

Ah, yes, ‘once you have all the mechanisms down’. Through the Ages: A New Story of Civilization is a game with a lot happening at once, and the first thing you need to do is learn all these interacting features and memorise them.

There is nothing obtuse about what’s happening, there are plenty of silky actions to take, but it’s like playing four Carcassonnes at once. Luckily the design team knows this, and one of the great things about the game is you get two rule books. The first is a walk-through on how to play the basic game, in the order you need to know things. It’s basically a YouTube run through in book form, with an old style rule book to look at later, and this is very helpful indeed.

So what is the game about? You play the god, ruler or other determining figure of a civilization, and you guide it from ancient times to, if you play the full game, the modern age. But, and here’s where assumptions start to be challenged, you do not pick an existing civilization to play, this isn’t the sort of game where you pick Romans and follow this through.

You can acquire leaders and wonders of the world from across real history, but you’re not pretending to be anyone. Furthermore, this is a game of civilization building that doesn’t have a map. You are not conquering the world, and although there is a military part to the game (which like all the other parts, is as involved as some basic games) you won’t be swooping across Europe. You win by gaining the most culture points, not by conquering the world.

You might be wondering what the flavour is like, with no map or named civilization. I have to be honest, there is a disconnect between what you’re doing and the real world, a degree of abstraction. You really won’t feel like Napoleon just took Moscow. But there are plenty of other games for that, and you will absolutely feel like you are growing your growing your own culture.

Through the Ages: A New Story of Civilization has been a hit because it isn’t just a normal civ game, it is something else.

So how do you play? Forgive me, but because there is so much going on in this we don’t have the room or time to explain it all. However, here are the bare bones: players have a combination of actions, military and civilian, which can be taken each turn, the number of which changes depending on your type of government.

Governments can be found on cards, and each turn you have the chance to buy cards from a visible pile which is always having the top cut off, so the cards keep moving along and you have hard decisions to make about what to buy and when, as the cards provide troops, leaders, upgrades and more. You buy cards and buildings and promote population, using resources, the production of which you can expand. You have a finite population to deal with, and the more that are used the more have to be kept happy, and finite resources, and the more that are used the more you have to keep an eye on corruption.

Finite? Well yes, but here’s a clever thing. At the start when you produce one cube of food, that’s worth one cube. But as the game progresses you can either build more one cube of production, or you can buy and play the cards to upgrade the type of production so that one cube is worth two, or much more food and resources. So you have a finite number of blocks, and rioting and corruption to deal with, but you can make those blocks worth more.

Suddenly, the abstract use of coloured blocks becomes a lot more engaging and complex, and that is this game in a nutshell. That’s before we get to science and religious production, the use of military cards to attack your opponent (but never wiping them out) and many more fun little wrinkles.

Essentially, to upgrade anything you need the people to run it, the science to know it and the resources to build it, as well as often having to have gained the right card from the eyes of your rivals.

A military to protect it helps, and the military can be used to take the culture points from other people and destroy their assets, but to get a military that can win you may be behind in organic culture. You need to balance all this. If one side goes all military and you don’t, you can get battered, but never ejected from the game. War is about eroding resources, not turning the map red.

So how does this play? Through the Ages: A New Story of Civilization is perfect for two to four players, I have had success with all these numbers, and the game time is limited by the cards: run out of cards for the stack and game over.

A Sense of Civilization

Having said you don’t feel like you’re expanding your civilization in geographic terms, I have to stress you do feel like you are passing through the ages, as the title promises. The cards which are the engine to this game are divided into several decks depending on how long you want the game, and each deck is a different era. You start with ancient, and then move closer to now when ancient is exhausted, so at the start of the game you’re looking at irrigation, Hammurabi and soldiers with swords, while after an hour of inexorable card turning you are very much weighing up modern era developments and troops.

In a way, that’s the core of Through the Ages: A New Story of Civilization and exactly what was promised: not conquest, but guiding your people through the ages. They may only be little yellow cubes, but because they are finite, because they are governed by a happiness you have to keep up, and because much of the skill is allocating them you do feel you’re dealing with a population, which is more than most civ games ever do.

Everything in the box is nice and thick and weighty, although you do have to put your own stickers on some of the counters.

Final Thoughts on Through the Ages: A New Story of Civilization

This is a game you have to devote time to, to learn and perfect, more time than normal. This is a game where you don’t conquer a map, but come to love jiggling your resources and population about instead to produce your culture and fight wars of grand strategic outlook.

Through the Ages: A New Story of Civilization is a great game that avoids being like so many other games in favour of a broader experience. Well worth a few hours learning.

The Good
Tightly balanced rules system.
A real sense of time and parenting your civ.
Lots of ways to approach building.
Works well with 2 – 4 players. The Bad
Takes commitment to learn.
Not for traditional megalomaniacs.