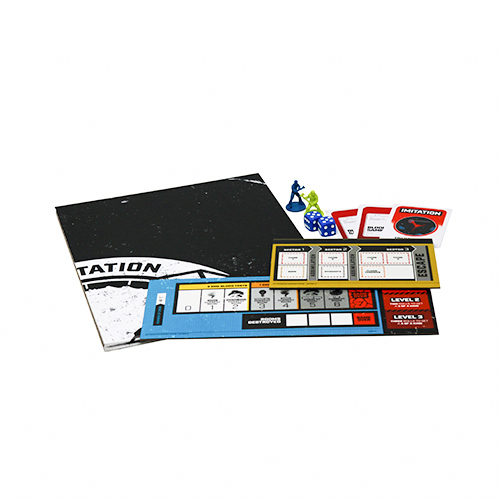 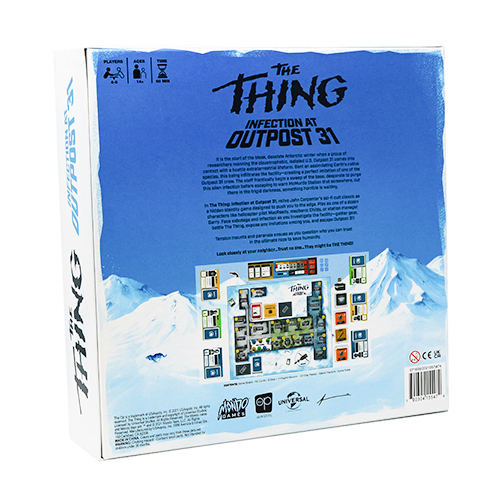 you could earn 4575 victory points

you could earn 4575 victory points

In the start of a bleak, desolate Antarctic winter, a group of researchers manning the isolated Outpost 31 encounter a hostile unknown lifeform. Bent on assimilating every living thing it finds, this creature infiltrates the facility and creates a perfect imitation of one of the Outpost 31 crew. The staff frantically begin a sweep of the base, desperate to purge this alien infection…
Read More
Category Board Games Tag Zatu Gold Award SKU ZBG-USOST05152400210004 Availability Restock Expected
Share
Share this
86%

In the start of a bleak, desolate Antarctic winter, a group of researchers manning the isolated Outpost 31 encounter a hostile unknown lifeform. Bent on assimilating every living thing it finds, this creature infiltrates the facility and creates a perfect imitation of one of the Outpost 31 crew. The staff frantically begin a sweep of the base, desperate to purge this alien infection before escaping to warn people that somewhere, out there in the frigid darkness, something horrible is waiting.

The Thing: Infection at Outpost 31 is a hidden identity game. You will relive John Carpenter's sci-fi cult classic in a race to discover who among the team has been infected by this deadly lifeform. Play as one of twelve characters as you lead a series of investigations through the facility, using supplies and equipment to clear the building. The tension mounts and paranoia ensues as you question who you can trust. It’s the ultimate race to save humanity!

The Thing: Infection at Outpost 31 board game is based on a film originally made in 1951. It received high praise from critics and cinema goers alike. In 1982 it was remade with somewhat less enthusiasm coming from the public but has since gained quite the cult following from fans of suspense and horror films due to its creepy thrills.

A 2011 prequal received relatively positive reviews, but I wouldn't have said this or the 50s or 80s version had a story that was crying out for a board game adaptation. But here we are, and it's fantastic!

Set in a South Pole research station, the story details the invasion of an alien being, that has the ability to transform its appearance and starts to take over different people within the camp. The perfect theme for a hidden character game, so perhaps it was a mechanical choice more than a thematic one? Or maybe designer Joe Van Wetering is just a fan of the movie?

The feeling of isolation in the film is certainly transferred to the game. Players take it in turns to act as the captain and venture forth with a group of their choosing to investigate a nearby area. As a group, you need to clear rooms one by one to expand your search parameter to cover the whole base, in order to escape on the helicopter. But the whole time, some players, randomly assigned to be "The Thing" as Imitations will be trying to sabotage your every move.

If enough rooms are destroyed by the Imitations or if the contagion level raises too high. Or if one of the players acting as The Thing is chosen to join the captain on the Helicopter in the final escape then the players playing as Imitations will win, and the other players all lose. The only way you can win as the players is to last long enough to escape on the helicopter without any imitation joining you by clearing the rooms, fighting The Thing, and picking your crews wisely.

The game starts with each player being given a Blood Sample card. This will reveal their role in the game, to them alone, either that of a human or an imitation. There will be one imitation dealt at the start of the game to one of the players.

Later in the game, more will be dealt out amongst other human cards. In a seven or eight player game, there is the chance for two more Imitations to be dealt. In a four to six player, there can only ever be one more. This is the main rule difference between player counts, but the overall feeling with more players is very different. For a game about table talk, the more in this case is very much the merrier.

Once everyone has been assigned their roles, the captain for the round will then draw a mission log card and must pick a team of players to help based on the card's requirements. At the start, you won't have much to go on as to who is the imitation. But as the game goes on, player's actions and words will start to reveal the cracks of truth!

The captain and players chosen to be a part of this round must submit a card face down to a group deck. The captain will then shuffle them all together without looking at them, before revealing what has been contributed to the mission. Players can either contribute items that will help complete the mission or sabotage cards.

There are different ways to play this part of the game detailed in the rules. You can choose your preference based on the number of players, and their relative experience with the game. Players can give clues as to their suitability to be picked for each mission based on what cards they have, or you can allow players can say whatever they want, truth or otherwise.

This gives the imitation a better chance of forcing themselves to be picked saying they have only great stuff, before playing a card that sabotages the mission, whilst the whole time accusing another player of playing that card rather than them. How well players can bluff in this way will make or break this game.

Congratulations On Your Massive Pack Of Lies!

If it's obvious when players are lying, the game becomes a bit of a process. Simply running through the motions without any real tension or drama. However, if a player can really hide their true motivations and create some chaos, then this game can become truly epic. Unlike most games, the harder this game is to win, the better it is as an experience for those round the table.

The cards played by each chosen crew members will determine the number of dice that can be rolled per mission, to a maximum of six. If the result of the dice roll meets the requirement for the mission card, then the humans pass the mission and can reveal the chip that was in this room. Their search was successful.

This chip could either be a useful item such as some Rope or The Thing itself which would start a battle. If they fail in any way, either through missing the requirements of the room or via a sabotage card, then the room could be lost to fire. Loose too many rooms and the game is lost.

Battles work by the players involved in the mission by providing another card to determine how many dice can be rolled. You will be facing The Thing at three different levels of difficulty throughout the game as you make your way through different rooms within the base. A level one Thing requires you to roll three of a kind with three rolls.

Level two you must do the same but with just two rolls. A level three Thing requires four of a kind through four rolls. If you manage to roll successfully then you can move on to the next sector. If you fail, then all the remaining chips that are currently undiscovered in your sector are removed, shuffled, and placed back into all rooms that have not been destroyed or cleared.

When teams fail at clearing a room or defeating the Thing the contagion tracker moves on one space. This is another way the player/s working as imitations can win. It also reduces the human player's chances of success at the end game, depending on far down the track this has gone.

When it comes to the final decision as to who you want to pick to join you on the helicopter, you can reveal three, one, or zero blood tests to check other player's roles based on your position on the contagion tracker.

If you manage to defeat The Thing in battle, you will move onto the second section, which increases your chance of being infected. More Blood sample cards are dealt out to all players as you open your crew up to a wider area of the base. This gives a second or third player the chance to become an imitation, making each decision for building a crew, mission and battle even harder. In the final third section when you defeat the Thing, then will move onto the final escape attempt on the helicopter.

The entire game is built on two T's. Table talk and tension. With the right group, this game can be amazing. The accusations, counter accusations, and general arguing are hilarious.

The moments when one player is convinced that another person is playing as a human, and they defend them to the hilt, only to then realise they were wrong, can be hilarious, tense and highly rewarding.

Usually, another player has been quietly setting up arguments and accusations. If they managed to creep their way onto the Helicopter to win the game for the Imitations, when everyone was convinced of their innocence... well, this is what hidden character games are all about and what games like this are made for.

Thematically, I can now see what encouraged the designer of this game to choose this film and specifically this location for a game like this. The sense of isolation adds to the game. There is no help coming, and you need to get out to survive. It works perfectly with a hidden character game and helps develop the sense of uncertainty in every decision, and ultimately, the fun the game brings to the table.

The location and story are intrinsically linked. So much so, that the crew at the real-life South pole Telescope station where the game and film is set, have a tradition whereby the two movies are watched the first night after the final plane of the season has departed. Perhaps now, they will play the game too! Although, that may make it too real!

If watching a horror film about being slowly taken over by an alien being appeals, get this game. Also, if you enjoy the feeling of being scared and confused in a location where this very sense of isolation pours from every locked door, and snow blocked the road, then this game should be top of your wish list! If not, then perhaps just play with the lights on and some good friends, because either way, you will have fun!