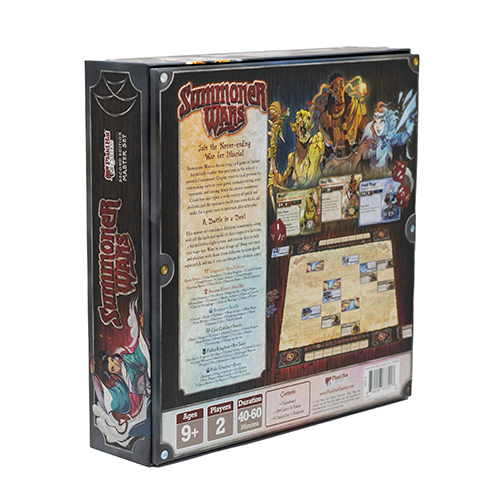 Summoner Wars puts you in the role of a powerful summoner. Display your tactical prowess by summoning units to your gates, outmaneuvering your opponent, and cutting down the enemy summoner. Countless unit types, a wide variety of spells and abilities, and the option to build your own decks, all make for a game sure to entertain, play after play.

Summoner Wars is a 2 player head to head card and board game in which rival summoners and their factions face off across an 6 x 8 board - last Summoner standing.

The game rules are incredibly straightforward. Each player works through the 6 phases of their turn before handing over to their opponent.

That's it! That's the rules, or at least the bulk of them in a paragraph. And it sounds pretty dull, doesn't it? And yet that couldn't be further from the truth - Summoner Wars has great decision space for both strategy and tactics, and makes for a really thinky and often tense head-to-head experience. How can that be the case I hear you say? Well I think it comes down to 4 key design points.

The first is the tension of how to use your Summoner in Summoner Wars. On the one hand they are your most powerful unit, and one which you can always summon adjacent to. So if they are up front they are doing damage and dropping units straight up into the sharp edge of the fight. On the other hand, if they die you lose. And while they have HP up into double figures, these can drain away remarkably quickly to sustained opponent's attacks.

Second is the variety of the factions that you can choose to play, all decidedly different. From the Fallen Kingdom, whose necromantic summoner can damage themselves to summon undead units back from the discard pile to the Cave Goblins with their 0 cost common units and their summoner's ability to swap places with any of their minions. From the Polar Dwarves that can build ice walls and shunt them around the board, steamrollering units in their way, to Savannah Elves that use boost tokens to temporarily buff units giving them additional attacks or health for example. There are 6 of these in the Master Set - all well balanced and designed and all providing options for freshness and replayability. Though despite numerous plays I have yet to try them all, as there are two or three that I really want to feel I have mastered before I choose to try anything new, and that speaks volumes of the care and thought behind the design.

Number three is the place of luck in the mechanics. Combat involves rolling a number of chunky and satisfying red six-sided dice which show symbols for melee hits, ranged hits and specials. Typically you'll be rolling 1-3 dice when one of your standard units attacks and more for champion units and your summoner. Each dice has a 5/6 chance of a melee hit and a 4/6 chance of a ranged hit - so it certainly isn't that swingy, but there is just enough edge to mean that you can't quite guarantee the outcome you desire, and sometimes when you roll a miss and an enemy doesn't die as anticipated the consequences can be inconvenient to say the least. Because health and attack strength are independent an enemy on its last legs hits just as hard as one freshly summoned.

Finally the mechanics an rules around magic points and the summoner's deck itself. Magic points always feel like they are in short supply. You start with 2 or 3 and you get them by killing enemy units or burning cards from your hand. Now both of those sound ok, but then there is a key rule I haven't yet mentioned. When your deck is gone it is gone. No shuffle the discard and start again. That's it. Gone.

The game continues until one Summoner is dead and you play with what you have left - a dwindling army of minions and the summoner themselves. Sounds ok if a bit meh, but actually this is epic. It has a huge impact. It informs every decision about what you summon, how you fight and what if anything you discard. There is a real feeling of scarcity, and it makes you think - not paralysing but enough to keep you on your toes.

Together these cleverly conceived elements of the design make for a really engaging game with surprisingly strong character (given it is essentially an abstract), smart mechanics which weld simple rules and devilish decision space, and loads of replayability. The art and design are sharp and the production values are strong. It is accessible enough to play with a wide variety of players, though the nature of the game may not appeal to all. Summoner Wars (2nd) edition is a great blend of board and card game, a super head-to-head fight which has enjoyed many outings sat with a friend trying out the different combos of x faction vs y factions and so on.

This one is a keeper and I recommend you give it a try… you could always start by giving the free trial app a go, or if the Master Set is too much of an investment there is a starter set too.