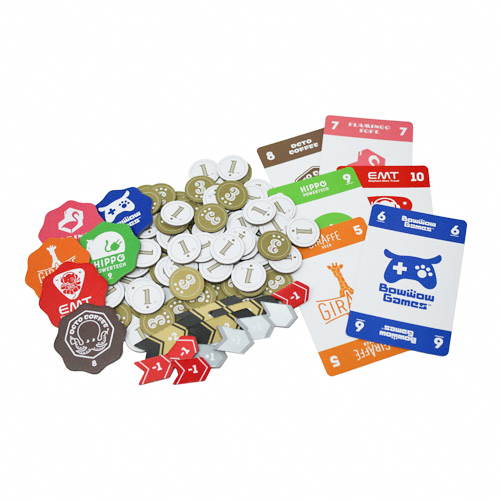 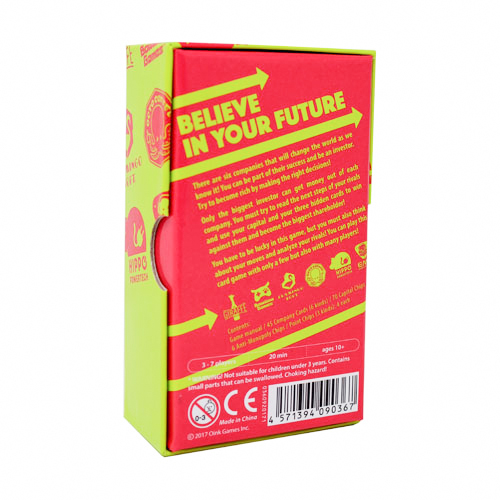 There are six companies that will change the world as we know it! You can be part of their success and be a investor. Try to become rich by making the right decisions!Only the one biggest investor can get money out of each company. You must try to read the next steps of your rivals and use your capital and your three hidden cards to win against them and become the biggest shareholde…
Read More
Category Board Games Tags Best Sellers, Golden Pear, Jun Sasaki, Oink Games SKU ZBG-ONK0001STU Availability 3+ in stock
Share
Share this
78%

Startups is a fun card game about investing in stocks for small companies looking to make it big. There’s also a healthy dose of push-your-luck going on, as well as hand management and bluffing your opponents. Between 3-7 players can join in, and games last about 20-30 minutes. The box art not only looks funky in lime-green, but it’s also pocket-size. It’s tailor-made for fitting in a quick game during a lunch break!

Players start with a hand of three company cards. On your turn, first you draw a card. Then you either discard one to a public draw pile, or keep one in your own tableau, in a set collection fashion. When drawing, you either draw a previously discarded card, or blind from the deck. If you draw blind, you have to pay a coin onto each discarded card. Sometimes its worth picking a discarded card to claim the coins on it!

Once the deck runs out, the majority shareholders earn money. And they earn money off their opponents, who are the minority shareholders! So you’d better be sure that when you do decide to keep a card in your tableau, you’re going to be the leading shareholder…

Designed by Jun Sasaki, Startups comes from popular publisher Oink Games. These two are such a perfect match for each other. Oink Games produce simple board games that pack a big punch into their small boxes. (Each one is about the size of a Ribena carton!) Sasaki is the mastermind behind titles such as Deep Sea Adventure and A Fake Artist Goes To New York. So rest assured, Startups sits among superb company!

Startups is a set collection game by Oink Games, one of my favourite publishers. Their small and colourful boxes always make it easy to tell it’s an Oink Game. Having to fit your game into a tiny box is such a great limitation to impose on designers. Every component has to be vital to the game to be in that box.

I live in Brighton, which I only mention because it will help you picture how small the flat I rent is. If I want to buy Scythe then I have to sell a similar size game to make room for it. I can buy a small game like Startups knowing there’s going to be space for it on a shelf or in a drawer. I never game in my flat (if you pictured the size correctly then you’ll be able to work out why) my heavy Alien Legendary box never makes the journey to board game nights.

Startups has come with me every time, if my bag is full then it slips into a jacket pocket. Knowing I’m likely to play is an incentive to buy and I’m expecting to have to secrete a lot more of the Oink Games catalogue around my flat.

Startups is a re-implementation of 2015 game, Rights, which I’ve never played. The theme was fashion designers competing for pattern copyrights. Pictures of Rights make the fashion theme seem bland but the companies used in Startups are engaging and add character. I always welcome games having a makeover, sometimes only a few rules tweaks and updated art is all it takes to take a game from being good to great.

The aim of Startups is to make the most profit by investing in eight startup companies. Whoever manages to collect the most cards for each company will receive one coin per share owned by opponents.

Inside the box are 48 animal themed company cards, an anti-monopoly token for each company, and plenty of coin tokens. There are six companies, each with a unique number of cards (this number is printed on all of that company's cards) each player gets three cards and 10 coins. On a turn one card is always picked up and one card is always played, keeping the hand size constant at three.

Every player has a personal investment area in front of them, around the draw pile is the shared market area. The game ends when there are no more cards in the draw pile.

The hidden information drives the interactions in Startups. Because five random cards get put back in the box before the start of a game, player’s are denied perfect card counting information, using odds and educated guesses instead, making bluffing easier. If your group is anything like mine, bluffing and exaggerated table talk adds a lot of fun and laughs to any game.

The flow of a turn is simple. Take the top card of the deck (placing $1 on each card in the market) or a card from the market, along with any money on it. Then, you play a card from hand, either in front of you to represent investment or into the shared market. When you invest in a company you also take the matching anti-monopoly token, the tokens have two functions;

Keeping in mind how the anti-monopoly tokens will move between players is the key to making the most of your actions in this game. The other important aspect is judging when to invest in a company, too early and no one else will invest, too late and you won't be biggest investor. The tightrope walk of wanting to narrowly be the top investor in a company is what makes your decisions difficult.

Another variable in Startups is that if two players draw as the main investors no payout happens for that company. This can provide players looking down the barrel of a big loss a great way to wriggle out of it. Manipulation of the market gives a chance to effect draws between your opponents to your advantage.

The cardboard coins seem unusual at first, there’s one on one side and three on the reverse. When I first opened the box I assumed this was a flawed way of saving space. The addition they provide to the game is obvious as soon as you’ve been through end game scoring. The coins are worth one during the game, and only change to three when received as an end game payout. The player giving the money is losing one but the player receiving it is gaining three. This encourages spending money during the game as the one value side isn't as valuable to your end game score as securing a payout.

The flow of a turn seems straightforward but is full of difficult decisions. Do you take a card from the market that you don’t want but has money on it? Do you draw from the deck even though it’s going to cost you three money to do so? Now you've got a new card, which of the four cards in your hand you are going to get rid of? Will you be investing or putting a card into the market?

The turns are quick but every step of the way feels like an agonising choice. Sometimes the best play will be obvious. Take the card in the market with five money on it, draw from the pile because it’s free this turn, invest in the company you have the anti-monopoly token for. These easier turns come about due to careful planning a turn or two before. So when you do get a simple go, it feels great and it feels earned.

The box states a very ambitious player count of 3-7, a wide range. You can pull this off if your game works like Welcome To or NMBR 9, where extra players don’t change the balance of the game. Startups is not immune to the feel of the game shifting. It’s a great game at three or four players and a good game with five people, but loses it’s magic when you try it with six.

Their play testing with seven people must have gone well for them to include it as an option but it is not for me. For each player you add the randomness of the game increases, damaging for a game where manipulation of the market is how you execute good plays. You lose the ability to make decisions that will pay off in a turn or two, instead hoping to draw the cards you need by chance.

When I play Startups I get reminded of another game I enjoy, Arboretum. They are both set collection games with simple turns characterised by increasingly difficult decisions. Both will your brain hurt as you try to accommodate the ever changing variables to work out the best move. While I enjoy the money mechanics in Startups it does feel like Arboretum has achieved the same level of depth with a smaller rule set.

I did play one game where another player, trying an unusual strategy, managed to lock up most of the money in the game. I was the unfortunate who didn’t realise what was happening until it was too late, reduced to having to take cards I didn’t want from the market as I couldn’t afford to draw from the pile. Once I was in that situation there was no way out of it and the second half of the game was miserable. I am happy to admit it was an unlikely scenario, but to not have any way back in was frustrating.