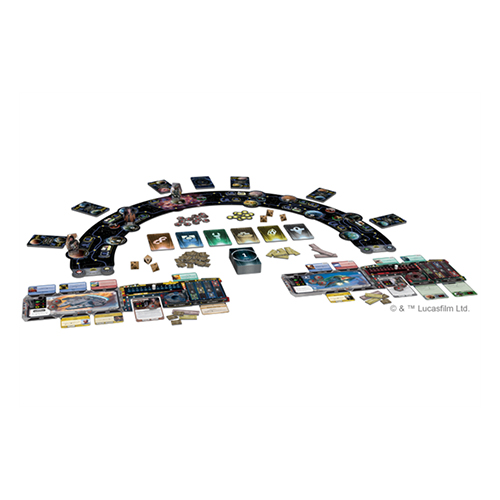 you could earn 5699 victory points

you could earn 5699 victory points

The original Star Wars films resonated for many reasons, not least the amazing depth of the universe Lucas created and how that was fleshed out by the support cast of characters. Han and Chewie were the obvious ones, but characters like Boba Fett and Boosk developed their own cult followings. Star Wars: Outer Rim gives you the chance to play as one of these rogues in a side story  …
Read More
Category Board Games Tags Corey Konieczka, Fantasy Flight Games, Podcast Approved, Star Wars, Zatu Platinum Award SKU ZBG-FFGSW06 Availability Restock Expected
Share
Share this
90%

The original Star Wars films resonated for many reasons, not least the amazing depth of the universe Lucas created and how that was fleshed out by the support cast of characters. Han and Chewie were the obvious ones, but characters like Boba Fett and Boosk developed their own cult followings. Star Wars: Outer Rim gives you the chance to play as one of these rogues in a side story  game of space trading and shenanigans.

The components to the game are of the typical good to great quality that we have come to expect from Fantasy Flight Games. Examples include some dual layer player boards which keep track of your fame, missions, jobs and bounties, as well as a rudimentary track of your standing with three factions - Imperials, Rebels and the Hutts.

The ‘board’ itself is a series of connecting puzzle-like pieces that form the galaxy in a rainbow set-up that is both visually pleasing and gives adequate space for the multiple decks of cards you will be using. While not quite a story driven game, there is an effort to seed your imagination and let you fill in the gaps. Of course there is also the opportunity to play as Han, hire Chewie to your crew and fly the Millennium Falcon through the Kessel Run…

Over the course of Outer Rim you will be flying from planet to planet taking on various legal and illegal jobs, trying to avoid factions you have bad standing with, meeting various characters and trying to increase your fame. Lots of exciting things happen like the moment you draw a bounty for the crew mate of another player, and start chasing them all over the universe.

That said, there is a lot of dice driven luck in the game, and it can be difficult to mitigate that unless you know that going in. My first game was riddled with bad rolls, but in subsequent games I made sure I had some abilities to counter that. Outer Rim also has a few odd choices for characters that I’m not sure quite line up in the same timeline, but in a game that lets you play as Han, Lando, Boba Fett and Boosk it’s easy to forgive.

Despite it’s reasonably long play time, Outer Rim provides as much experience as it does a game. You will remember the time Boba Fett chased you to Tattoinne to claim his bounty on Chewbacca, or when you managed to evade the Hutts and make your delivery earning the required fame to secure an unlikely victory.

It is a welcome change to explore this universe from the eyes of the rogues, rather than the same old Jedi/Sith tropes.

Star Wars: Outer Rim is the latest game from Fantasy Flight Games set in the beloved universe, albeit without the iconic Jedi, Sith, lightsabers or the force. Instead, players travel to the titular Outer Rim, where it’s all about bounty hunters, mercenaries and smugglers. Was this a good choice? And, despite shifting the focus on a vastly unexplored territory of the universe, does the game feel like Star Wars?

In short, yes. Before I proceed to outline reasons why, I would like to put a disclaimer. I am a huge Star Wars fan. I also believe that familiarity with the universe helps with the immersion. It also provides a necessary context to what is happening on the board. However, it is not a prerequisite to fully enjoy this game. After all, creating your own story is where this game shines.

One of the most novel ideas about Outer Rim is its board. A modular semi-circle depicting planets and paths has become almost synonymous with this game. It's a nice step away from the rectangular norm. The graphics are clear. Lines connecting the pieces of the map are cleverly placed to create a continuous line, no matter the order. The only criticism is that the pieces fit quite tightly and unsnapping them without bending the cardboard is always a nerve racking experience.

An advantage of a semi-circle board is the space inside of it, and it is clear that the game was designed with this layout in mind. Card decks for planets, market, and events all fit snugly in the space and form an extension of the board. All cards are well labelled and have great artwork throughout. The linen finish also makes them feel well-made and durable.

This also extends to the many tokens and even dice, which are tailored to this game. Player boards, too, feel sturdy and are very practical. Apart from tracking fame – the main scoring track – they also track reputation with various factions in the game, and provide a hub for jobs, bounties, and gear. Every player also has their own ship and the associated board, which is much thinner, but not less practical. Ships have space for cargoes, crew, and modifications, while providing some fantastic pictures of some of the most iconic space vessels.

It is also worth pointing out that the game has no miniatures. Players use standees for their characters and ships are depicted on tokens. This is a smart move by the publisher. It allows to keep the game relatively cheap for a licensed product and does not distract from what’s important – the adventure.

The premise of Outer Rim is simple, players travel to different planets to win fame by completing jobs, delivering cargo, or capturing bounties. The first player to reach the specified amount of fame wins.
The simplicity is perfectly complemented by narrative along the way. Outer Rim has storytelling elements, uncovered in every turn. There is uncertainty of what’s going to happen when meeting new contacts, completing jobs, or exploring planets. Every encounter may bring something positive, or negative.

Interacting with a specific faction, for example by meeting a contact on a planet, may lead to the contact joining the player’s crew, attacking them, or offering a job, depending on the above mentioned reputation. Likewise, the patrol ships in the space will let the player go if they have positive reputation with that faction, or attack them if their reputation is negative.

Fighting is determined by rolling a number of dice equivalent to the attack of the player’s character, or ship, and that of the opponent. The one with more hits comes out victorious. If the player gets damage equal to, or exceeding, their defence, they must spend the following turn recovering.

Dice also determine various tests throughout the game. Each character has a number of skills that make passing a test easier and crew members can also provide further abilities. When attempting a particularly difficult job, or hunting a powerful bounty, players can also purchase equipment from the market. Weapons, armour, and special abilities can increase the number of dice, defence, or allow to re-roll blank outcomes.

As I have already alluded at the beginning of this review, Outer Rim is a very good game. I’m impressed with how well it manages to marry different genres to create a cohesive, yet simple, game and capture the Star Wars feel at the same time.

It is also clear how much thought went into its design. Cards slide into their slots on the player board, covering irrelevant information and reducing the clutter on the table. Testing with dice does not feel like players need to rely on pure luck. Items, crew members and special abilities accrued in the course of the game further mitigate that risk. Most jobs have the required skills listed so players can take an informed decision on whether to accept or pass them.

The fluff on the cards is also generally very good, although how much one will take from it will depend on person and how much into Star Wars they are. A great addition to the narrative is the player progression, which feels rewarding and provides a sense of accomplishment. The state of the players’ characters and their ships at the end of the game will rarely ever be exactly the same as at its beginning and the upgrades are genuinely helpful and fun.

One of the areas that Outer Rim is not so fun is downtime. Every player performs all actions in their turn and it can sometimes take long, especially at the beginning when learning the game. There is little to do on another player’s turn and due to the shared market and constantly changing location of patrol ships, planning ahead may not always work out.

Of course, watching other players embark on their adventures and seeing if they succeed is still enjoyable. However, these will begin to repeat eventually. There is a limited number of event cards, and an even smaller pool of jobs and bounties. Although, depending on the reputation and a roll of dice the outcome of those may be completely different.

It will take a lot of games before all cards are seen and by that time some will surely be forgotten. It is also clear that Fantasy Flight Games will be releasing future expansions for Outer Rim. Some numbers in the event deck will be skipped altogether. In addition, the modularity of the board also enables more planets to be added in to expand the universe. This could perhaps forming a full circle.

Outer Rim will definitely appeal to Star Wars fans. It would be prudent to suggest that people unfamiliar with Star Wars will enjoy it as much. They will certainly miss out on some of the magic of the franchise. But for all those longing for a new adventure in the galaxy far, far away, this is an unmissable game. In Outer Rim, being Han Solo, flying the galaxy in Millennium Falcon while having Chewbacca in your crew is as likely as being Han Solo, flying Boba Fett’s Slave I while hunting Chewbacca for a lucrative bounty. And that is what this game is about.