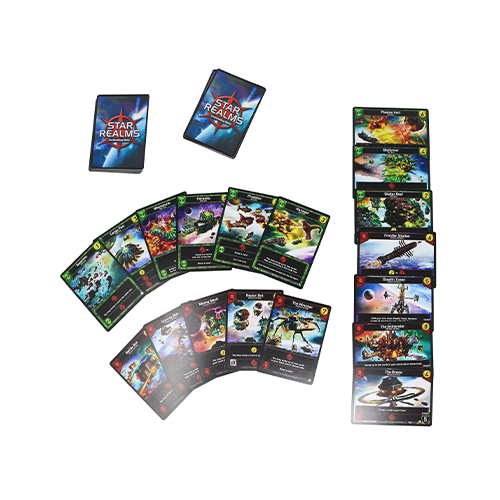 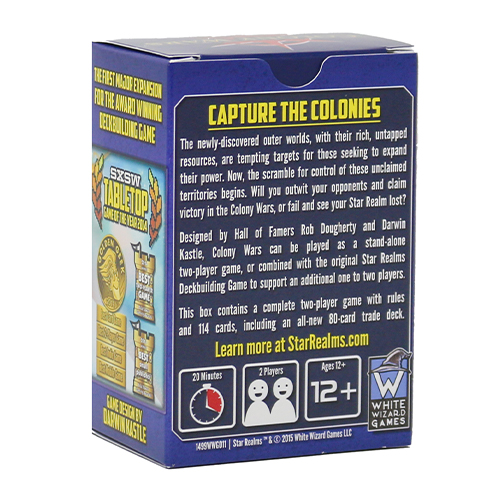 you could earn 1489 victory points

you could earn 1489 victory points

Colony Wars is a deckbuilding game in the Star Realms series which is both a standalone box set for two players (featuring an 80-card trade deck, as in the original) and an expansion for the base Star Realms set that allows it to be played as a four-player game. This row is continuously replenished by random draws from the trade deck. When you reduce your opponent’s Authority …
Read More
Category Board Games Tags Best Sellers, Colony, Darwin Kastle, Robert Dougherty, White Wizard Games SKU ZBG-WWG011 Availability 3+ in stock
Share
Share this
88%

Colony Wars is a deckbuilding game in the Star Realms series which is both a standalone box set for two players (featuring an 80-card trade deck, as in the original) and an expansion for the base Star Realms set that allows it to be played as a four-player game.

In Colony Wars, as in Star Realms, players will start with a fleet (deck) of 10 basic ships, and can spend Trade to acquire more powerful ships and bases from a central trade row of 5 cards. This row is continuously replenished by random draws from the trade deck. Many ships and bases deal Combat damage which you can use to attack your opponent and/or destroy their bases. When you reduce your opponent's Authority to zero, you win.

Star Realms: Colony Wars is the first (and, currently, only) standalone expansion in the Star Realms series of games. Designed by Darwin Kastle and Rob Dougherty, and published by White Wizard Games, Colony Wars can be played without you owning any other Star Realms products, or it can be combined with the core set and any of the other expansions that have been released.

Players can also combine the starter decks from Colony Wars and the core set to play games with 5-6 players.

Colony Wars at a glance

Colony Wars' gameplay is fundamentally the same as that of the core set. The rules are the same, the four factions are the same and the card mechanics are, with a couple of minor exceptions, the same. As with the core set, players buy cards from a five-card Trade Row and add them to their deck, allowing them to play with hands of five increasingly powerful cards as the game progresses.

There's still only two types of cards, ships and bases, and players are still using combat to try and reduce their opponent to 0 Authority.

So why buy it? Well, for fans of Star Realms, Colony Wars adds 80 brand-new Trade Deck cards and comes with the promise of fixing the developmental issues that some players identified in the core set. As a result, for players who have no experience of Star Realms at all, some people (myself included...I think) would recommend just starting from scratch with Colony Wars.

Colony Wars feels slick and balanced. The art is just as good if not better than the core set, the price is fantastic and its complexity is around the same level as the core set, so how exactly does it differ?

The differences between Star Realms and Colony Wars

If you've never played Star Realms you'll probably want to skip this section, but for those who've played the core set it's definitely worth knowing how the two differ, because nothing fundamental has changed. I think the differences are highlighted best by looking at each faction.

Possibly the worst single faction in the core set, Star Empire gets a big boost in Colony Wars. Its discard effects are mostly relegated to faction abilities, with draw power and hand filtering becoming more prominent. Their combat effects also feel more powerful, their expensive cards are a lot more exciting than Fleet HQ, and they have a bit more trade to play with, too.

The power of the Machine Cult cards feels a little more toned down compared to the core set, largely because the scrap abilities on the cheapest cards are restricted to either the hand of the discard pile, they never give you the choice between both. Conditional scrapping is also more prevalent in the mid-level bases, while the expensive cards still let you go ham.

Blobs also feel like they've been tuned down to balance the game. While they still have a bit of draw power, it feels like the Star Empire is now the main drawing faction. Instead, Blobs retain a focus on combat and manipulating the Trade Row, and also emphasise ships over bases. The Blob bases are fairly weak and none of them are Outposts, and their high-cost cards are all ships.

This faction probably feels the most similar to the core set. It still leans heavily on trade with less combat than the other factions. Bases are also emphasised much more than ships, with powerful bases at multiple cost levels. In fact, the seven and eight cost cards for this faction are all bases.

A few other changes

I mentioned some minor mechanical additions that will feel new to players. The main new mechanic is a cycle of cards - one per faction - that get added to your hand when you buy them instead of going to the discard pile, as long as you've played another card of that faction that turn. They vary in power level, and function as a nice reward for leaning into one faction over the others.

The other mechanical differences come as a result of different combinations of abilities that there wasn't space for in the core set. Players who have played the core set will be able to grasp their usefulness quickly, while their complexity is moderate enough that the barrier to entry stays low for new players.

With the factions more balanced across the board, the number of viable strategies open to the players increases. Any faction could be the main focus of your deck and they can combine in all sorts of ways depending on the cards that are available and the style of deck you want to build.

With more choices available, the chances of an unplayable Trade Row are much lower, though there are undoubtedly still some cards that you won't want to see come up! On the whole, the game feels more rounded than the core set, and it's nice that this hasn't been achieved by upping the complexity.

I really, really like Colony Wars, and playing it a few more times in the run up to writing this review cemented that feeling. It just feels like a cleaner, more polished version of Star Realms, which is what you'd expect from a standalone expansion. If you like the core set, you really should give Colony Wars a go.

On the other hand, if you're looking for an entry point into Star Realms games, I would strongly recommend starting here (unless you're the kind of person who likes to get the first game first). I think Colony Wars is a slightly better experience on the whole even if you have no prior knowledge of any Star Realms games, and it's just as readily available as the core set.

Of course, it's still not perfect - this style of deck-building game has some inherent randomness in drawing cards from the Trade Deck and the top of your deck, so if you like full control this probably isn't the style of game for you. The variance does improve the replay-ability, however, so it's definitely not a complete negative. It's just not the kind of game you'll  like if you're committed to heavy, highly strategic board games.

For the price you pay and the kind of game it is, you get a lot of fun and many hours of entertainment - you just have to be aware of what you're paying for.

Star Realms: Colony Wars is, quite simply, an excellent deck-building game, made by a design team and publishing company that have deck-building down to a tee. The game is a perfect starting point for players who are new to this style of play, and a worthy addition to the collection for long term fans of deck-builders, like myself!